Source: DTN News - - This article compiled by Roger Smith from reliable sources BAE Systems
(NSI News Source Info) TORONTO, Canada / WARTON, United Kingdom - May 21, 2011: BAE Systems has been awarded long term contracts worth a total of £39m by the UK’s Ministry of Defence (MOD) to provide support services to ensure that Typhoon continues to maintain its ability to operate in all types of environments. 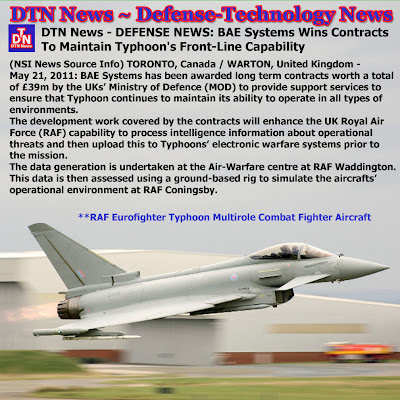 The development work covered by the contracts will enhance the UK Royal Air Force (RAF) capability to process intelligence information about operational threats and then upload this to Typhoon’s electronic warfare systems prior to the mission.
The data generation is undertaken at the Air-Warfare centre at RAF Waddington. This data is then assessed using a ground-based rig to simulate the aircraft’s operational environment at RAF Coningsby.
Martin Taylor, BAE Systems’ Combat Air Support Director says: “BAE Systems is proud to be awarded this significant contract which demonstrates our ongoing commitment to maintain Typhoon’s front-line capability. The contract will also allow us to continue to work as part of an integral team with the UK MOD and the RAF as well as sustain the essential skills of our workforce to continue the support of the Typhoon fleet."
Notes to editors:
- BAE Systems also takes a major role in ensuring the availability of the Typhoon fleet to meet its standing and operational commitments. The contract, known as Typhoon Availability Service (TAS) aims to deliver best practice support solutions. The arrangement will see the RAF’s Typhoon aircraft maintained and supported by the Company until the end of 2013.
- A key requirement underpinning TAS is to drive the, reduction of Typhoon support costs over the lifetime of the jet. Working in partnership with the RAF and UK MOD, a range of innovative support solutions has been identified to maximise value and minimise costs.
- Although BAE Systems have had a presence at RAF Coningsby, in Lincolnshire, since 2004, the Typhoon Availability contract has expanded the BAE Systems population at the base to over 400 employees. 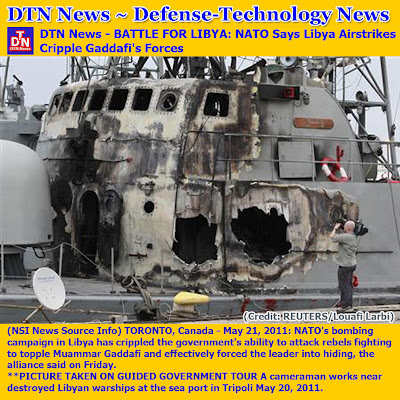 NATO took command of a U.N.-authorized mission nearly two months ago to stop Gaddafi's forces attacking civilians, and Western governments including the United States, Britain and France are under pressure to show results.
Ambassadors of the 28 NATO states who met this week are confident the mission is making "steady and tangible progress," said NATO spokeswoman Carmen Romero, adding that the campaign had relieved pressure on rebel-held towns.
"NATO nations and partners agree we have taken the initiative. We have the momentum," she told a briefing in Brussels.
"Our mission remains unchanged -- we will prevent attacks and threats against civilians until the threat is removed. The evidence shows we are doing just that," she said, adding that NATO had helped relieve the siege on the port city of Misrata.
Three months into an uprising against Gaddafi's four-decade rule, rebels control the east and pockets in the west including Misrata. The conflict has reached a stalemate as rebel attempts to advance on Tripoli have stalled.
Tripoli calls the rebels criminals and al Qaeda militants and says NATO's bombing is armed aggression by Western nations bent on grabbing Libya's oil.
Libyan state television showed footage on Thursday of Gaddafi. But NATO military spokesman Wing Commander Mike Bracken said in Brussels that strikes on command-and-control centers Tripoli had limited Gaddafi's ability control his forces.
"It has also constrained his freedom of movement." Bracken said. "Effectively he has gone into hiding."
In a sign of international discord over the campaign, Russia stepped up its criticism of NATO. A foreign ministry statement accused NATO of killing civilians and destroying infrastructure.
Rebels and government forces battled in an area called Ryna around 10 km (6 miles) east of Zintan, a town in the contested Western Mountains region.
A Reuters reporter in the center of Zintan heard artillery rounds and anti-aircraft gunfire. A rebel spokesman in the town, Juma Ibrahim, said it appeared pro-government forces were trying to advance and were firing tank rounds and heavy guns.
MISSILES HIT LIBYAN SHIPS
U.S. President Barack Obama said on Thursday that Gaddafi's downfall was inevitable. The administration says it will not put U.S. soldiers on the ground in Libya.
Instead, the Pentagon said it has shipped the rebels military food rations and will soon provide other forms of non-lethal aid including uniforms, tents and protective vests.
In an escalation of the campaign, NATO said it sank eight Libyan warships and intercepted the oil tanker Jupiter, saying it believed the fuel would be used for military purposes.
Libyan officials took journalists late on Thursday to Tripoli's port, where a small ship spewed smoke and flames. Missiles hit six boats, said port general manager Mohammad Ahmad Rashed. Five were coastguard vessels and one was a navy ship but all had been under repair since before the fighting began.
By targeting shipping, NATO is enforcing a blockade against civilians, Rashed said. Journalists taken back to the port on Friday saw three badly damaged vessels, one partly submerged.
"We had been told if those ships moved they would be destroyed so they were docked here," said Amran al-Ferjani, chief of the Libyan coastguard.
A series of apparent high-level defections suggest Gaddafi is struggling to hold his inner circle together.
Tripoli says its top oil official, Shokri Ghanem, is on an official visit to Europe but rebel and Tunisian sources say he has defected and his name was on a list for a flight to Vienna.
(Additional reporting by David Brunnstrom in Brussels, Matt Robinson in Zintan, Phil Stewart and David Alexander in Washington, Alissa de Carbonnel and Steve Gutterman in Moscow and Isabel Coles in Cairo; Writing by Matthew Bigg, Editing by David Stamp)