Source: DTN News - - This article compiled by Roger Smith from reliable sources RT(NSI News Source Info) TORONTO, Canada - June 29, 2012: Russia’s main weapons producer has allegedly suspended its contract with Syria to supply S-300 long-range missile systems. Russia’s ‘Vedomosti’ daily published the report, citing unnamed sources within the military-industrial complex.The very fact of the contract’s existence was not known until it was revealed in an annual report made only last week and published online by the makers of the S-300 systems, Almaz-Antey. 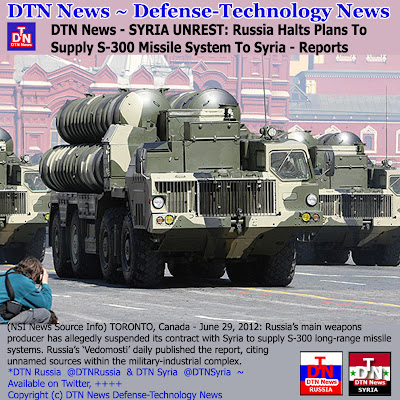 The report states that the company’s largest contracts are with Algeria (which is paying $39 million for a long-range missile defense system), and Syria, which signed a contract for the same system for $105 million.
The report also says that deliveries on the Syrian contract are expected to be made between 2012 and 2013. But ‘Vedomosti’ claims two separate sources, who chose to remain anonymous, have said deliveries have been put on the back-burner “after a direct order from above.”
It’s unclear whether these reports are true, but many are already speculating on the potential reasons for such a step. Some have suggested that Moscow has decided to placate Washington and Tel Aviv, drawing parallels between this situation and the one back in 2010, when Russia cancelled its contract for the same missile system with Iran.
However, the circumstances in 2010 were rather different. If Russia had fulfilled its contractual obligations back then, it would have been violating an international embargo. But no such embargo currently affects contracts between Russia and Syria.
Others have suggested that Damascus may be strapped for cash, and simply cannot afford the S-300 complex. This claim is also open to speculation as military cooperation between the two states is basically founded on the fact that Russia forgave Syria its $10 billion debt in return for future arms contracts.
No officials have yet commented on the matter, so it will be some time before light is shed on the situation. But President Vladimir Putin had previously said the arms that Russia delivers cannot be used in civil conflicts, and Russia’s foreign minister, Sergey Lavrov, stated the supplies were merely defensive weapons sold in contracts signed long ago.
“We are sending no battleships to Syria. We have been saying publicly that we have been implementing contracts under which we have to supply arms to Syria. These armaments are entirely defensive and they mostly consist of air defense systems, which cannot be used against the population and can only be used to respond to outside aggression,” Lavrov told RT.

Attention has been focused on military ties between Russia and Syria for some time, ever since international media claimed Russia was supplying helicopters to Bashar al-Assad’s regime. US Secretary of State Hillary Clinton at first even lashed out at Russia, but later backtracked and was forced to admit that the shipment that had got the West’s blood boiling merely consisted of some old helicopters sent back to Russia for repairs.
Although the Russian Ministry of Defense does not disclose the total value of the arms supplied to Syria, outside estimates exist. The US Congress says Russia has outstanding contracts to supply arms for $3.5 billion, while the Swedish think-tank SIPRI puts the figure at between $5 and $6 billion.
Among the widely reported shipments are two K-300 Bastion coastal defense batteries, equipped with supersonic Yakhont missiles. Two anti-aircraft systems, BUK-M2 and PANTSYR-S1, have also been purchased by Syria, though it is unclear if the orders have been fulfilled.
A $550 million contract for 36 Yak-130 planes was signed between the countries earlier this year. While nominally a sophisticated training jet, it can also serve as a light combat aircraft. Russia has also promised to deliver 24 modernized Mig-29 destroyers. It is assumed that neither of these contracts has been fulfilled. 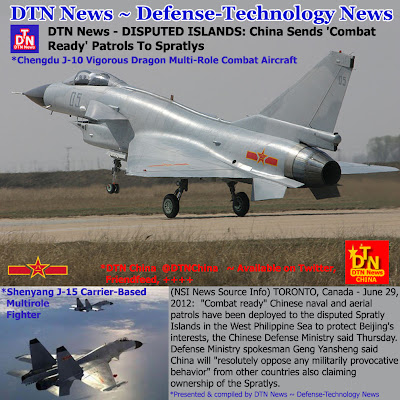 "In order to protect national sovereignty and our security and development interests, the Chinese military has already set up a normal, combat-ready patrol system in seas under our control," he said."The Chinese military's resolve and will to defend territorial sovereignty and protect our maritime rights and interests is firm and unshakeable," Geng added.Vietnam has launched regular air patrols over the Spratly Islands.Four aircraft, including two Russian-made Sukhoi Su-27 fighter jets, were deployed to the area on June 15, according to Vietnam's Thanh Nien News.The Philippine Air Force, meanwhile, has deployed reconnaissance aircraft to Scarborough shoal just off Zambales that China is also claiming.China is involved in a long-running dispute with Vietnam and the Philippines about ownership of islands and atolls in the West Philippine Sea. Taiwan, Malaysia and Brunei also have claims.The simmering tension between China and the Philippines over Scarborough has eased in recent weeks but Chinese vessels were spotted again at Scarborough shoal this week, prompting concern that the dispute may flare up again.The Chinese Defense Ministry also announced Thursday that the People's Liberation Army's (PLA) top officials are considering establishing a "presence" in the new city of Sansha (City of Three Sands), which was set up to govern the Nansha (Spratlys), Xisha (Paracels), and Zhongsha (Macclesfield Bank) islands.Geng said in press conference that China may set up local military command organs in the islands, state news agency Xinhua said.The State Council, or China's Cabinet, has approved the establishment of the prefectural-level city of Sansha to administer the Spratlys, the Paracels, and Macclesfield Bank, with the government seat to be stationed on Yongxing Island in the Paracels, a statement from the Chinese Ministry of Civil Affairs said.At stake is control over what are believed to be significant reserves of oil and gas.
CNOOC, China's offshore oil specialist, said on its website last weekend that it would invite foreign partners to explore jointly and develop nine blocks just off Vietnam this year.On Tuesday, Vietnam said CNOOC's plan was "illegal" and the blocks encroached its territorial waters.
At a regular briefing on Wednesday, China's Foreign Ministry spokesman, Hong Lei, insisted that the tenders were in accord with Chinese and international law and urged Vietnam not to escalate the dispute.PLA among '9 dragons stirring up the sea' (Chengdu J-10 Vigorous Dragon Multi-Role Combat Aircraft)According to a recent analysis made by the International Crisis Group, the PLA is just one of the many Chinese government agencies involved in an internal power struggle over the Spratlys and the West Philippine Sea."China is one of its own worst enemies in the South China Sea as its local governments and agencies struggle for power and money, inflaming tensions with its neighbors, illustrated by Beijing’s latest standoff with the Philippines," the Crisis Group said in a study published in April this year.“Some agencies are acting assertively to compete for a slice of the budget pie, while others such as local governments are focused on economic growth, leading them to expand their activities into disputed waters," said Stephanie Kleine-Ahlbrandt, the Crisis Group’s North East Asia Project Director. “Their motivations are domestic in nature, but the impact of their actions is increasingly international."The study said the Chinese Foreign Ministry should be the lead body coordinating Beijing's policy in the sea.
"But the ministry lacks the power and authority to control the agencies, including five law enforcement bodies, local governments and private sector actors," it explained.
This has resulted in law enforcement and paramilitary ships independently plying the disputed waters just west of the Philippines.
According to the study, the top "dragons" claiming a piece of the Spratlys pie are the Bureau of Fisheries Administration, the China Marine Surveillance, the local governments, the Foreign Ministry, and the PLA Navy.
The other agencies include China's energy companies, the National Tourism Administration, the environmental protection ministry, the Coast Guard, the Customs Anti-Smuggling Bureau, and the Maritime Safety Administration.
The Defense Ministry's announcement Thursday may indicate that Chinese leaders have chosen the PLA Navy as the lead "dragon" in the country's bid to claim the Spratlys. - with a report from Reuters*Link for This article compiled by Roger Smith from reliable sources By Jojo Malig, ABS-CBNnews.com