Navistar Defense LLC, Warrenville, Ill., is being awarded a $141,964,119 firm-fixed-priced delivery order #0021 under previously awarded contract (M67854-07-D-5032) for the procurement 140 MaxxPro Recovery Vehicles (MRVs) and logistics sustainment spares and support. MRVs support U.S. and coalition forces requiring assistance resulting from disabled vehicles during Operation Enduring Freedom and Operation New Dawn. Work will be performed in West Point, Miss., and work is expected to be completed by the end of November 2011. Contract funds will not expire at the end of the current fiscal year. The Marine Corps Systems Command, Quantico, Va., is the contracting activity.

BAE Systems Land & Armaments L.P., Minneapolis, Minn., was awarded on July 14, 2011, a $24,068,204 firm-fixed-price contract for the procurement of 57MM HE-3P cartridges and 57MM target practice cartridges. This contract is for fabrication, testing, inspection and delivery of 57MM, MK 295 MOD 0, high explosive pre-fragmented programmable, proximity fuzed (HE-3P) cartridges and 57MM, MK 296 MOD 0, target practice cartridges to function in the MK 110 MOD 0 gun mount. Work will be performed in Bjorkborn, Sweden, and is expected to be completed by November 2013. Contract funds will not expire at the end of the current fiscal year. This contract was not competitively procured. The Naval Surface Warfare Center, Indian Head Division, Md., is the contracting activity (N00174-11-C-0039).

DTI Associates, Inc., Arlington, Va., is being awarded a $15,165,201 modification to previously awarded contract (N00024-10-C-5132) for professional support services to the Office of the Chief of Naval Operations. These services include support services in the areas of program management, business financial management, and systems engineering for the Pentagon, Navy Annex, and Crystal City locations. The primary responsibilities of OPNAV N86 are to oversee and support integration of capabilities and resources to the Deputy Chief of Naval Operations. The contractor will provide subject matter experts, critical budget and finance support, and support in the development of operational requirements and concept of operations analysis. The contractor will coordinate program input and support between other government agencies, foreign services, academia, technical activities, laboratories, warfare centers, and industry. Work will be performed in the Washington, D.C. metro area and is expected to be completed by August 2012. Contract funds in the amount of $7,127,644 will expire at the end of the current fiscal year. The Naval Sea Systems Command, Washington, D.C., is the contracting activity.

Element Environmental LLC, Aiea, Hawaii, is being awarded a maximum amount $15,000,000 firm-fixed-price, indefinite-delivery/indefinite-quantity architect-engineering contract for installation restoration investigations at various Navy and Marine Corps activities in the Naval Facilities Engineering Command (NAVFAC) Pacific area of responsibility (AOR). The work to be performed provides for engineering, chemistry, geology, hydrogeology, human health and ecological risk assessment, social and life sciences, drafting, electronic data management, statistics, health and safety, and other support services. No task orders are being issued at this time. Work will be performed within the NAVFAC Pacific AOR including, but not limited to, Hawaii, Guam, and Japan, and is expected to be completed by July 2014. Contract funds in the amount of $25,000 will expire at the end of the current fiscal year. This contract was competitively procured via the Navy Electronic Commerce Online website,with eight proposals received. The Naval Facilities Engineering Command, Pacific, Pearl Harbor, Hawaii, is the contracting activity (N62742-11-D-1821).

National Steel and Shipbuilding Company, San Diego, Calif., was awarded July 13, a $12,674,979 modification to previously awarded contract (N00024-08-C-4410) for USS Harpers Ferry (LSD 49) FY11 Extended Docking Phased Maintenance Availability. An Extended Docking Phased Maintenance Availability is an extensive ship renovation and modernization, including alterations and repairs, including inspection and testing of all ship’s systems and components ensuring safe and dependable operation of the ship. Work will be performed in San Diego, Calif., and is expected to be completed by July 2012. Contract funds in the amount of $12,674,979 will expire at the end of the current fiscal year. The Southwest Regional Maintenance Center, San Diego, Calif., is the contracting activity.

FLIR Systems, Inc., Wilsonville, Ore., is being awarded a $7,785,143, firm-fixed-price, indefinite-delivery/indefinite-quantity contract for electro-optics sensor (EOS) systems, failure analysis, repairs, upgrades, field repairs, provision item order spares, maintenance training, and data in support of the Naval Shipboard Protection System program. The EOS systems are rugged and ship mountable to provide surface ships with a day/night, high-resolution, infrared and visible band imaging capability, as well as range finding capability, to augment existing optical and radar sensors for the purpose of detecting and identifying asymmetric threats. The EOS systems will be operated on military maritime crafts exposed to harsh operating and environmental conditions. The EOS systems will be used to detect threats as they are entering into a U.S. Navy exclusion zone. Work will be performed in Wilsonville, Ore., and is expected to be completed by July 2016. Contract funds in the amount of $65,397will expire at the end of the current fiscal year. This contract was not competitively procured. Naval Surface Warfare Center, Crane Division, Crane, Ind., is the contracting activity (N00164-11-D-JQ64).

The Missile Defense Agency (MDA) is announcing the award of a cost-plus-fixed-fee contract modification, option exercise, under contract HQ0147-09-C-0007 to The Boeing Company of Huntsville, Alabama. The total value of this contract modification is $36,723,335 increasing the total contract value to $697,000,221. Under this contract modification, the contractor will manage the Ground-based Midcourse (GMD) Defense Weapon System Sustainment and Operations Support to include system sustainment, training, and operations support of the GMD mission assets. The work will be performed in Fort Greely, Alaska, and Colorado Springs, Colorado. The performance period is from 1 September through November 30, 2011. Contract funds will not expire at the end of the current fiscal year. The MDA, Huntsville, Alabama, is the contracting activity.

Camel Manufacturing, Pioneer, Tenn.,* was awarded contract SPM1C1-11-C-0019. The award is a firm fixed price contract with a maximum $8,611,440 for lightweight maintenance enclosures. There are no other locations of performance. Using services are Army, Navy, Air Force and Marine Corps. The date of performance completion is October 31, 2012. The contracting activity is the Defense Logistics Agency Troop Support, Philadelphia, Pa.

Crown Clothing Co., Vineland, N.J., ** was awarded contract SPM1C1-08-R-1144. The award is a firm fixed price contract with a maximum $8,372,133 for coats. There are no other locations of performance. Using service is Marine Corps. The date of performance completion is July 26, 2012. The contracting activity is the Defense Logistics Agency Troop Support, Philadelphia, Pa.

Latest news on Afghanistan, President Harmid Karzai's government and the British Army deployment in Helmand province where our soldiers are fighting the Taliban.

A senior cleric is among those killed by a suicide bomber who targeted the funeral of the assassinated brother of the Afghan president.

Afghanistan's first female military pilots arrive in US for training

Afghanistan's first crop of female military pilots have arrived in the US for training this week.

The Afghan president briefly climbed down into the grave of his brother and offered a short prayer during the funeral in the family’s ancestral village of Karz, 15 miles from Kandahar city.

Afghan president attends funeral of brother who was assassinated.

Ahmad Wali Karzai's assassination leaves a power vacuum in Kandahar and seriously weakens both the Afghan government and Nato efforts to prop it up, writes Michael Semple.

Turban-Hidden Bomb Is Detonated at Service for Karzai’s Brother 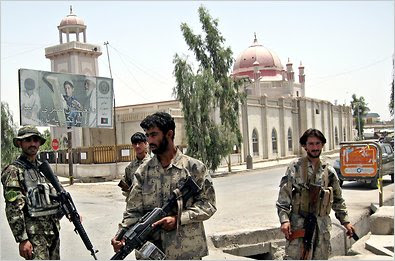 Afghan security officials on Thursday stood guard near a mosque in Kandahar where a suicide bomber detonated explosives.

At least three people were killed when a suicide bomber snuck a bomb into a Kandahar mosque by hiding it under his turban.

At least three people were killed when a suicide bomber snuck a bomb into a Kandahar mosque by hiding it under his turban.

Karzai Appoints Another Brother as Successor in Kandahar

President Hamid Karzai of Afghanistan moved swiftly to unite both the tribes and political support around him in the face of the continuing insurgency.

Half Brother of Hamid Karzai Is Killed in Kandahar

RFI - William Niba - ‎3 hours ago‎
The paper says that the finances of the army have been stretched to breaking point, by foreign operations in Afghanistan, the Sahel, Côte d'Ivoire and Libya and it's time to scale down France's strategic ambitions. L'Est Républicain wonders if there ...
Video: Bastille Day memories of French dead in Afghanistan

Toronto Sun - ‎Jul 12, 2011‎
His own children will one day come here and be proud of what their dad did for the people ofAfghanistan and for his country. The ground breaking of this special memorial was Tuesday. But there is more work to do before it can be built. ...
Give to Honour Those Who Gave! Marketwire (press release)
all 30 news articles »

Edmonton Sun - ‎10 hours ago‎
They are accused of breaking into a storage compound and stealing a number of recreational vehicles. The property reportedly belonged to two soldiers who are currently serving in Afghanistan, along with another soldier who just returned from the ...

DiManno: A moving experience for Canadians at Kandahar

Toronto Star - Rosie DiManno - ‎15 hours ago‎
From washing machines to barbecues, refrigerators to coffee pots, Canadian forces are holding what might be the world's biggest yard sale as they pack up at the end of their combat mission in Afghanistan. By Rosie DiManno Columnist ...

Worcester Telegram - Bradford L. Miner - ‎3 hours ago‎
27 in Afghanistan when an IED rolled the armored vehicle he was driving, shattering his right leg and breaking his back. The handmade sign of Sgt. Chalifoux's 3-year-old nephew, Blake Ketterer, said it all: “Welcome Home, Uncle Matt. I Love You. ...

National Guard MPs set to ship out to Afghanistan

Reno Gazette-Journal - Frank X. Mullen Jr - ‎13 hours ago‎
The training continued Thursday in Stead, with MPs practicing breaking up fights and making traffic stops. The soldiers also have had training in the tribal languages and the culture of Afghanistan. Guardsmen said the hardest part of the job will be ...
Nevada Guardsmen Heading to Afghanistan KTVN
all 5 news articles »

CBC.ca - Meagan Fitzpatrick - ‎19 hours ago‎
Beginning of Story Content The military trial for a former Canadian commander accused of breakingthe rules by having an intimate relationship with a fellow soldier while serving in Afghanistan is set to begin next week. Court martial proceedings for ...

DoD Buzz - Philip Ewing - ‎Jul 14, 2011‎
But the Marines are pretty good about killing people and breaking stuff all on their own, so when it comes to simple aerial overwatch or surveillance, they decided they wanted to do it all themselves. Troops with a new detachment of Marine UAV Squadron ...

Turning Assassination Into Opportunity in Afghanistan

Wall Street Journal - Michael O'Hanlon - ‎Jul 13, 2011‎
NATO has tried to get more key tribes and leaders on its payroll by breaking up big contracts into smaller pieces, but we lack evidence that this has really worked. So while it is appropriate to mourn the death of another Afghan leader in simple human ...
Video: Kabul: 4 killed in suicide attack in a mosque

KGO-AM - ‎Jul 14, 2011‎
The UN also said that more civilians are dying than at any point since the war in Afghanistan began -- up 15 percent over already record-breaking levels last year. The vast majority of civilian deaths and injuries are caused by insurgents, ...
Afghan civilian war deaths hit record level - U.N. report euronews