CONTRACTS
DEFENSE LOGISTICS AGENCY
Pacific Coast Fruit Co., Portland, Ore.*, was awarded a fixed-price with economic price adjustment contract with a maximum $37,163,979 for fresh fruit and vegetable support.  Other location of performance is Washington.  Using services are Army, Navy, Air Force, Marine Corps, and Department of Agriculture and Indian Reservations.  There were six proposals with three responses.  Type of appropriation is fiscal 2012 Defense Working Capital Funds.  The date of performance completion is May 2017.  The Defense Logistics Agency Troop Support, Philadelphia, Pa., is the contracting activity (SPM300-12-D-P132).

Delaware Storage and Pipeline Co., Nashua, N.H.*, was awarded a firm-fixed-price contract with a minimum $12,323,292 for a commercial contractor owned, contractor operated fuel storage terminal and services to receive, store, and ship fuel.  Using service is Air Force.  There were four proposals with one response.  Type of appropriation is fiscal 2012-2017 Defense Working Capital Funds.  The date of performance completion is March 16, 2017.  The Defense Logistics Agency Energy, Fort Belvoir, Va., is the contracting activity (SP0600-11-R-0513).

Alliant Tech Systems, Woodland Hills, Calif., is being awarded an $8,817,735 modification to a previously awarded cost-plus-incentive-fee contract (N00019-08-C-0058) for services and supplies in support of the Multi-Stage Supersonic Target Program, including procurement of 16 rocket motors to be used for safety and confidence testing, the material characterization program of R7340 graphite material, and long lead buy of armed firing devices and rocket motor cases for future low rate initial production requirements.  Work will be performed in Woodland Hills, Calif., and is expected to be completed in April 2014.  Contract funds will not expire at the end of the current fiscal year.  The Naval Air Systems Command, Patuxent River, Md., is the contracting activity.

WASHINGTON HEADQUARTERS SERVICE
Washington Metropolitan Area Transit, Washington, D.C., is being awarded a $15,000,000 modification to the firm-fixed-price contract to provide funding for Department of Defense transportation benefits for its employees.  Work will be performed in Washington, D.C., with an estimated completion date of Sept. 30, 2016. Washington Headquarters Service is the contracting activity (HQ0034-12-A-001-0002).

DTN News - DEFENSE NEWS: Iran Warns Deployment Of F-22s In UAE Is Harmful And Destabilizing Regional Security*Iran warns that positioning F-22s in UAE is a threat to regional security

Source: DTN News - - This article compiled by Roger Smith from reliable sources Arabian Aerospace(NSI News Source Info) TORONTO, Canada - May 1, 2012: Iran's Defence Minister, Brigadier General Ahmad Vahidi, has warned that the basing of the US F-22 Raptor strike aircraft in the United Arab Emirates is "detrimental to regional security."
According to the FARS news agency Vahidi said today that "The deployment of F-22 fighters in a base in the UAE is a harmful move and undermines the security of the region. 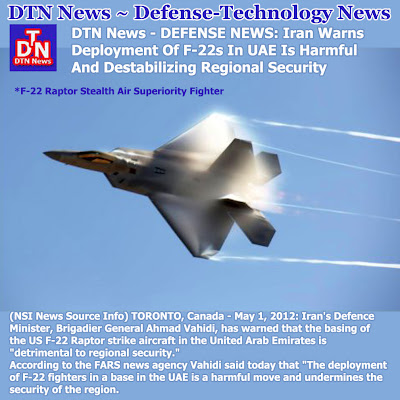 "We consider such (military) presence in the region as to be useless and harmful and more aimed at creating a psychological ploy and an insecure atmosphere in the region. We don't see it useful" Vahidi told Al Alam TV network, according to FARS.

Vahidi said that guaranteeing security in region is possible only through cooperation among all the regional states. The comments by the Iranian minister came after media reports revealed that the US has recently deployed its F-22 Raptors at the UAE Al Dafra Air Base.In a comment, FARS said that Iranian officials have always cautioned about the devastating consequences of tension in the region, and called on certain regional states to be "watchful of the plots of some aliens who seek to stir tension in this sensitive region."It said: "Tehran believes that deployment of trans-regional powers in the region impairs security and is a source of tension in the region, reiterating that regional peace and security will be established if all the regional countries grow united and stage all-out cooperation."Additional info from AFP;The United States has deployed sophisticated F-22 fighter jets to the United Arab Emirates amid deepening tensions between Iran and its pro-US neighbors, officials said Monday.The US officials, speaking on condition of anonymity, would not say how many F-22s would be sent to the Al-Dhafra air base in the United Arab Emirates. Military officers tend to avoid publicly discussing details of operations at the US air base.An Air Force spokeswoman confirmed that a number of F-22 Raptors, the most advanced fighter in the US fleet, would be deployed to the region without mentioning the base or Iran."The United States Air Force has deployed F-22s to Southwest Asia. Such deployments strengthen military-to-military relationships, promote sovereign and regional security, improve combined tactical air operations, and enhance interoperability of forces, equipment and procedures," said Major Mary Danner-Jones.Pentagon spokesman Captain John Kirby told reporters the move "was a very normal deployment" in keeping with an adjustment of US forces in the region following the withdrawal of American troops from Iraq.Territorial disputes between Iran and the United Arab Emirates over three islands in the Gulf have flared recently, with Washington voicing support for Abu Dhabi's stance.The argument over the Gulf islands comes against the backdrop of tensions surrounding Iran's nuclear program, with the US, European and Israeli governments fearing Tehran is pursuing a clandestine nuclear weapons project.Iran's atomic ambitions and growing missile arsenal have raised concerns in Gulf Arab states, which have negotiated arms deals with Washington to build up missile defenses as a counter to Iran.In December, the United States announced a $3.48 billion arms sale with the United Arab Emirates for missile defense batteries and radars.
Related News;

Ahram Online - ‎1 hour ago‎
The United States has deployed sophisticated F-22 fighter jets to the United Arab Emirates amid deepening tensions between Iran and its pro-US neighbors, officials said. The US officials, speaking on condition of anonymity, would not say how many F-22s ...

Xinhua - ‎3 hours ago‎
TEHRAN, May 1 (Xinhua) -- Iranian Foreign Ministry Spokesman Ramin Mehmanparast said Tuesday that the recent deployment of US F-22 Raptors in the United Arab Emirates (UAE) is against the regional security. Addressing reporters in his weekly briefing, ...

DAWN.com - ‎4 hours ago‎
PTI to announce its stance on 'Go Gilani Go' TEHRAN: The United States' deployment of cutting-edge F-22 fighter jets to the United Arab Emirates “will endanger the region's security,” Iran warned on Tuesday. “We do not in any way approve the presence ...