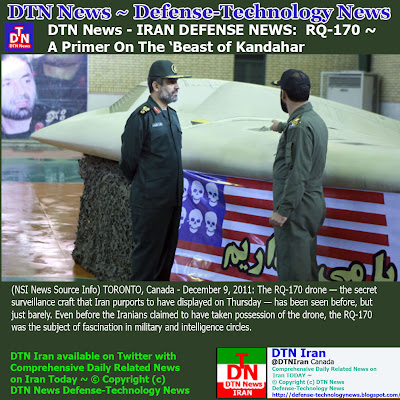 Even before the Iranians claimed to have taken possession of the drone, the RQ-170 was the subject of fascination in military and intelligence circles.

Although it was believed to have been first spotted in 2007, flying out of Afghanistan, it wasn’t until December 2009 — after a model was photographed at the main U.S. airfield in Kandahar province — that the military confirmed the existence of the craft.

The Air Force now maintains a fact sheet on the drone, made by Lockheed Martin, but little is known about its capabilities or specifications, other than that it has special coatings and a batwing shape designed to evade enemy air radar.

The RQ-170 has always been seen at a distance, and images have always been of poor quality. (You can see one such image here.)

The result is that it’s exceedingly difficult to verify Iranians’ claims about the drone, including that it’s authentic and that it was barely damaged when it went down in the country’s east. U.S. officials have already dismissed claims that the RQ-170 was shot down.

The drone shown by the Iranians Thursday is mustard or beige in color, and it appears broken and mended in parts.

According to an Iranian brigadier general quoted by the semiofficial Fars News Agency, the drone has a wing span of about 85 feet.

The model seen in 2009 was estimated to have a wingspan of as much as 80 feet, according to GlobalSecurity.org.

The Pentagon on Thursday declined comment on the Iranian images.

*DTN News ~ Press TV
Iran has strongly censured the violation of its airspace by a US spy drone, urging the United Nations to condemn such contravention and adopt necessary measures to end these “dangerous and illegal” acts.
Iran's Ambassador to the UN Mohammad Khazaei lodged the appeal in an official letter, also communicated to the Security Council and the General Assembly, to the UN Secretary General Ban Ki-moon, IRNA reported on Friday.
“Recently, an unmanned US spy aircraft of RQ-170 type and with a specified serial number violated the Islamic Republic's airspace,” Khazaei said, pointing to “increasing covert and provocative” operations by the US government against Iran during recent months.
He added that the aircraft flied 250 kilometers deep into the Iranian territory up to the northern region of the city of Tabas, where it faced “prompt and forceful” action by Iran's Armed Forces.
The Iranian government insists that the "blatant and provocative” violation of Iran's airspace is tantamount to an act of hostility against the country, which is a flagrant breach of the international law, particularly the fundamental principles of the UN Charter, the diplomat pointed out.
Khazaei further said that the Iranian government strongly objects to such “hostile and aggressive” acts and warns against the repercussions of repeating such misdeeds.
The Islamic Republic asserts its legitimate right to adopt all necessary measures to protect its national sovereignty, he added.
Iran's UN ambassador reiterated that the Iranian government “calls for the condemnation of such aggressive acts and implementation of effective and clear measures in line with the UN responsibilities to end these dangerous and illegal moves and to maintain regional and international peace and security in accordance with the UN Charter.”
On December 4, the Iranian Army's electronic warfare unit downed an RQ-170 Sentinel stealth drone after it crossed into Iran's airspace over the border with neighboring Afghanistan.
Two US officials, speaking on condition of anonymity, confirmed on Tuesday that the aircraft had been part of a CIA reconnaissance mission involving the United State's intelligence community stationed in Afghanistan.
On Thursday, Commander of the Aerospace Division of Iran's Islamic Revolution Guards Corps (IRGC), Brigadier General Amir Ali Hajizadeh said after the US spy aircraft's entry into Iran's eastern airspace, it fell in the electronic ambush of the Iranian Armed Forces and was brought to the ground with minimum damage caused to it.
Meanwhile, Iran's Foreign Ministry summoned Swiss Ambassador to Iran Livia Leu Agosti to strongly protest the recent violation of the Islamic Republic's airspace by the US spy drone.
Latest From Iran
»See more articles
*Link for This article compiled by Roger Smith from reliable sources Jason Ukman - The Washington Post -
Press TV
*Speaking Image - Creation of DTN News ~ Defense Technology News
*This article is being posted from Toronto, Canada By DTN News ~ Defense-Technology News
Contact:
dtnnews@ymail.com 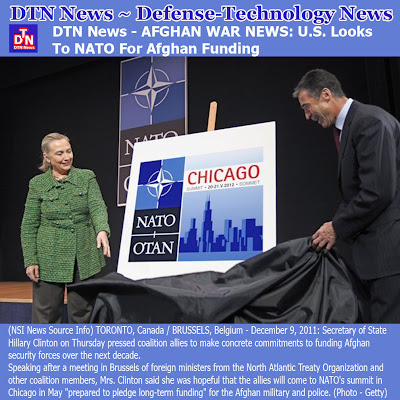 Speaking after a meeting in Brussels of foreign ministers from the North Atlantic Treaty Organization and other coalition members, Mrs. Clinton said she was hopeful that the allies will come to NATO's summit in Chicago in May "prepared to pledge long-term funding" for the Afghan military and police.
"I encouraged our allies to better define NATO's enduring partnership with Afghanistan," Mrs. Clinton said, "including its post-2014 mission to support the Afghan national-security forces, and to provide a strong base on which Afghanistan can build a stable, peaceful future."
Afghan and allied officials in Kabul estimate the cost of maintaining the Afghan security forces—slated to reach 352,000 men by fall of 2012—at between $4 billion and $6 billion a year.
That is far beyond the means of the Afghan government. Without foreign assistance stretching over a decade, many Western and Afghan officials say, the Afghans won't be able to fill the security vacuum left by the planned pullout of most U.S.-led combat troops in 2014.
Many NATO allies have been perplexed by the U.S. drive over the past two years to bulk up the size of the Afghan military and police, voicing concerns that such a large force would be unsustainable—and complaining that they hadn't been consulted. Some of these nations now resent being asked to cough up hundreds of millions of dollars a year to pay for it, especially as European economies are reeling from the euro-zone debt crisis.
NATO Secretary-General Anders Fogh Rasmussen said on Thursday that nations outside the Atlantic alliance, and outside the NATO-led coalition in Afghanistan, should help foot the bill. In addition to troops from NATO countries, the coalition in Afghanistan includes sizable forces from countries such as Australia, Georgia, Sweden, South Korea and New Zealand.
"We will finish the job to help create a secure Afghanistan—for our shared security," Mr. Rasmussen said. "But the whole international community has a stake in a stable and secure Afghanistan. And the whole international community must help achieve it."
An international conference uniting the NATO allies with countries including Russia, China, Iran and India, held Monday in the German city of Bonn, has already promised to provide financial aid to Afghanistan in the decade after 2014. Concrete commitments are slated to be made at a pledging conference in Tokyo in July.
In Brussels, at the two-day NATO conference that was attended Thursday by Russian Foreign Minister Sergei Lavrov, Moscow and the alliance sparred over NATO's missile-defense plans, as well as NATO's role in toppling the Libyan regime.
NATO says its planned missile shield, which includes a new radar system to be deployed in Turkey, aims to protect Europe from Iran and other Middle Eastern threats. Russia, however, is seeking binding guarantees that the planned system wouldn't be used against it.
The two sides agreed to continue negotiations on the matter, even as NATO officials said the deployment of the missile-defense project will go ahead. Russia didn't repeat Thursday an earlier suggestion by its ambassador to NATO, Dmitry Rogozin, that the missile dispute may be linked to Moscow's cooperation with the U.S.-led forces in Afghanistan.
In his only comments on Afghanistan at the Brussels conference, Mr. Lavrov described the conflict there as "a challenge to our common security."
NATO's so-called Northern Distribution Network, which has greatly expanded over the past year and which runs through Russia and the Central Asian states, provides the coalition with an increasingly important alternative to Pakistani supply routes.
The NDN, which accounts for at least half of coalition supplies, turned into a vital lifeline after Pakistan closed its border to NATO convoys last month, in protest over the killing of 24 Pakistani troops in an errant U.S. airstrike near the Afghan-Pakistani border.
Mrs. Clinton on Thursday hailed the NDN as "a very good example of Russia-U.S. and Russia-NATO cooperation" that is "mutually beneficial to all of us."
Write to Yaroslav Trofimov at yaroslav.trofimov@wsj.com
Related News;

The Press Association - ‎3 hours ago‎
Britain's military force in Afghanistan could be almost halved during 2013 under options to be discussed by David Cameron and security chiefs next week, it was reported. The Prime Minister will chair a meeting of the National Security Council on ...

eTaiwan News - ‎7 hours ago‎
AP Britain's government says the country's National Security Council is due to meet to discuss the withdrawal of troops from Afghanistan. Prime Minister David Cameron's office said Thursday the council would meet next week to consider the role of about ...

Telegraph.co.uk - ‎9 hours ago‎
Thousands of British troops could leave Afghanistan sooner than expected under proposals being considered by the government, it has emerged. A Royal Navy Sea King helicopter landing at FOB Shahzad to pickup soldiers rotating back to Camp Bastion, ...

The Guardian - ‎12 hours ago‎
Up to 4000 British troops could leave Afghanistan before the end of 2013 under proposals being put before David Cameron at a meeting of the National Security Council next week. The Guardian has learned that a sharp acceleration in troop withdrawal is ...

Newstrack India - ‎10 minutes ago‎
London, Dec 9 (ANI): Thousands of British military forces in Afghanistan could leave sooner than expected under proposals being considered by the government, it has emerged. British ministers are said to be drawing up plans for up to 4000 troops,...

UK to stay in Afghanistan beyond 2014

Press TV - ‎15 hours ago‎
A senior British official says there would only be a few hundred UK soldiers left in Afghanistan following the withdrawal of all foreign combat troops from the war-torn Asian country by the end of 2014. "My assessment is we are talking in hundreds and ...
In order to show you the most relevant results, we have omitted some entries very similar to those already displayed. If you like, you can repeat the search with the omitted results included.
*Link for This article compiled by Roger Smith from reliable sources
By Yaroslav Trofimov - WSJ
*Speaking Image - Creation of DTN News ~ Defense Technology News
*This article is being posted from Toronto, Canada By DTN News ~ Defense-Technology News
Contact:
dtnnews@ymail.com