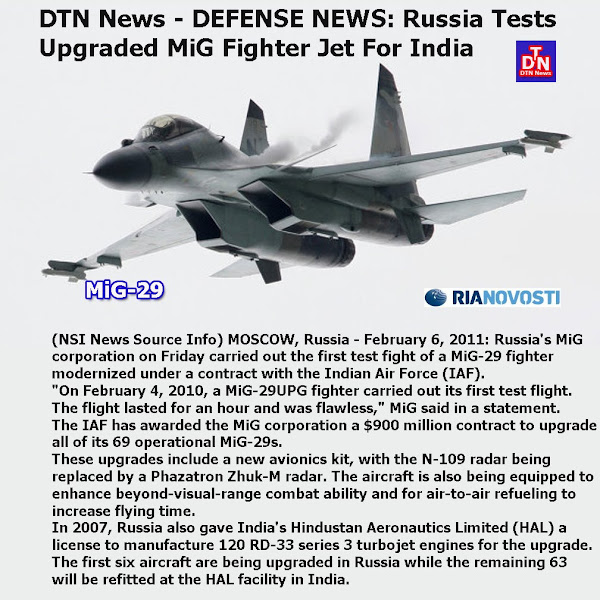 "On February 4, 2010, a MiG-29UPG fighter carried out its first test flight. The flight lasted for an hour and was flawless," MiG said in a statement.

The IAF has awarded the MiG corporation a $900 million contract to upgrade all of its 69 operational MiG-29s.

These upgrades include a new avionics kit, with the N-109 radar being replaced by a Phazatron Zhuk-M radar. The aircraft is also being equipped to enhance beyond-visual-range combat ability and for air-to-air refueling to increase flying time.

The first six aircraft are being upgraded in Russia while the remaining 63 will be refitted at the HAL facility in India.

Source: DTN News - - This article compiled by Roger Smith from reliable sources Ria Novosti
(NSI News Source Info) NEW DELHI/MOSCOW, - February 6, 2011: Russia's MiG-35 will not fly in the Aero India 2011 air show in Bangalore later this month, although its maker MiG maintains it is still a contender in a deal to supply 126 light fighter jets to the Indian air force.

"The aircraft will not fly," a MiG representative in Delhi told RIA Novosti on Wednesday. 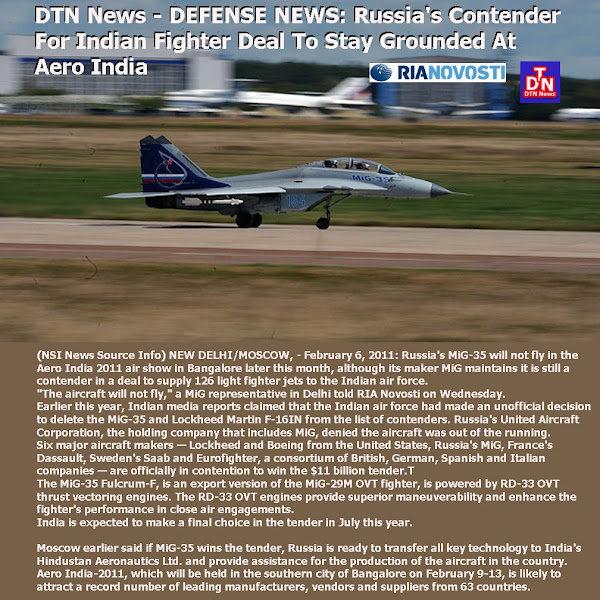 Earlier this year, Indian media reports claimed that the Indian air force had made an unofficial decision to delete the MiG-35 and Lockheed Martin F-16IN from the list of contenders. Russia's United Aircraft Corporation, the holding company that includes MiG, denied the aircraft was out of the running.

The MiG-35 Fulcrum-F, is an export version of the MiG-29M OVT fighter, is powered by RD-33 OVT thrust vectoring engines. The RD-33 OVT engines provide superior maneuverability and enhance the fighter's performance in close air engagements.

India is expected to make a final choice in the tender in July this year.

Moscow earlier said if MiG-35 wins the tender, Russia is ready to transfer all key technology to India's Hindustan Aeronautics Ltd. and provide assistance for the production of the aircraft in the country.

Aero India-2011, which will be held in the southern city of Bangalore on February 9-13, is likely to attract a record number of leading manufacturers, vendors and suppliers from 63 countries. 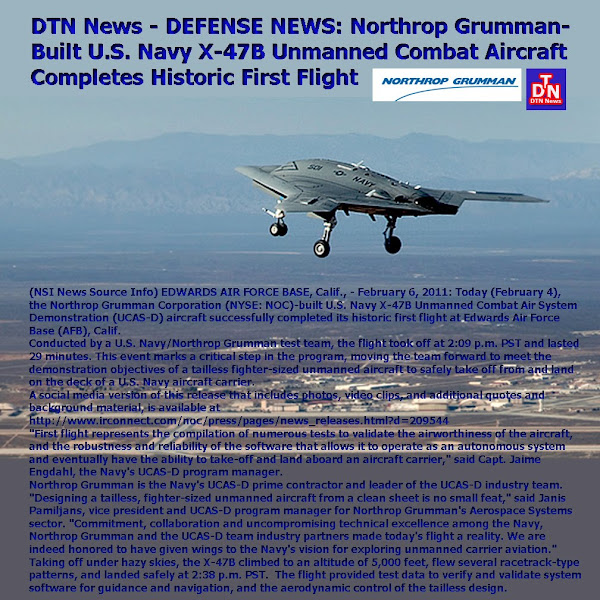 Conducted by a U.S. Navy/Northrop Grumman test team, the flight took off at 2:09 p.m. PST and lasted 29 minutes. This event marks a critical step in the program, moving the team forward to meet the demonstration objectives of a tailless fighter-sized unmanned aircraft to safely take off from and land on the deck of a U.S. Navy aircraft carrier.

A social media version of this release that includes photos, video clips, and additional quotes and background material, is available at http://www.irconnect.com/noc/press/pages/news_releases.html?d=209544

"First flight represents the compilation of numerous tests to validate the airworthiness of the aircraft, and the robustness and reliability of the software that allows it to operate as an autonomous system and eventually have the ability to take-off and land aboard an aircraft carrier," said Capt. Jaime Engdahl, the Navy's UCAS-D program manager.

Northrop Grumman is the Navy's UCAS-D prime contractor and leader of the UCAS-D industry team.

"Designing a tailless, fighter-sized unmanned aircraft from a clean sheet is no small feat," said Janis Pamiljans, vice president and UCAS-D program manager for Northrop Grumman's Aerospace Systems sector. "Commitment, collaboration and uncompromising technical excellence among the Navy, Northrop Grumman and the UCAS-D team industry partners made today's flight a reality. We are indeed honored to have given wings to the Navy's vision for exploring unmanned carrier aviation."

Taking off under hazy skies, the X-47B climbed to an altitude of 5,000 feet, flew several racetrack-type patterns, and landed safely at 2:38 p.m. PST. The flight provided test data to verify and validate system software for guidance and navigation, and the aerodynamic control of the tailless design.

As with all test programs, first flight represents the culmination, verification and certification of pre-flight system data collected and analyzed by both the Navy and Northrop Grumman. Airframe proof load tests, propulsion system accelerated mission tests, software maturity and reliability simulations, full system taxi tests, and numerous other system test activities were all completed and certified prior to first flight.

The aircraft will remain at Edwards AFB for flight envelope expansion before transitioning to Naval Air Station Patuxent River, Md., later this year. There, the system will undergo additional tests to validate its readiness to begin testing in the maritime and carrier environment. The UCAS-D program is preparing the X-47B for carrier trials in 2013.

The Navy awarded the UCAS-D prime contract to Northrop Grumman in August 2007. The six-year contract calls for the development of two X-47B fighter-sized aircraft. The program will demonstrate the first-ever carrier launches and recoveries by an autonomous, unmanned aircraft with a low-observable-relevant planform. Autonomous aerial refueling will also be performed after carrier integration and at-sea trials.