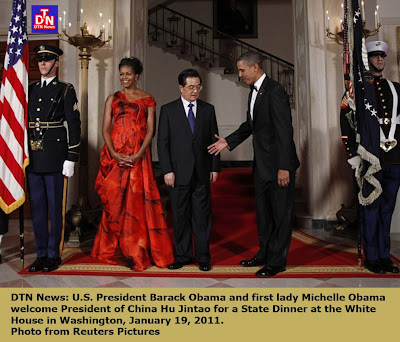 Obama and Hu sparred over human rights but smoothed over sharp differences by making an economic and strategic case for working together. On a long-awaited state visit, Hu made the unusual comment for a Chinese leader that 'a lot' remained to be done on freedoms in China, but pointedly did not share Obama's view that basic human rights were 'universal.'
*This article is being posted from Toronto, Canada By DTN News ~ Defense-Technology News, contact: dtnnews@ymail.com 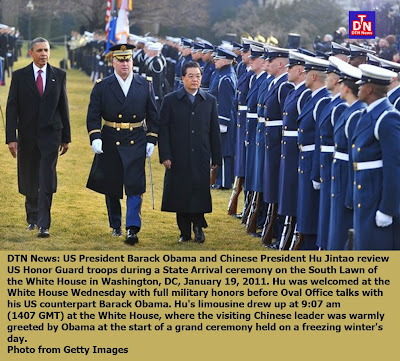 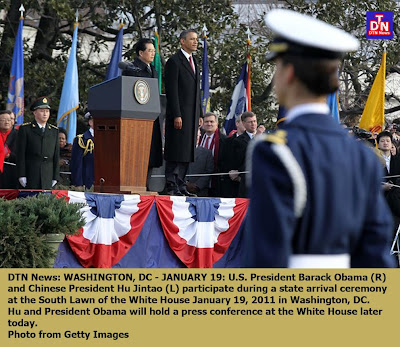 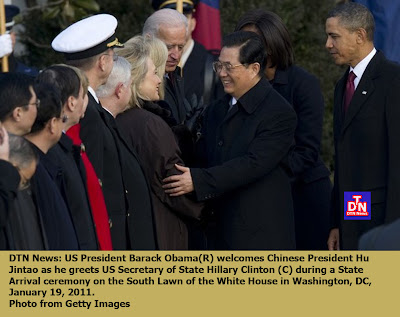 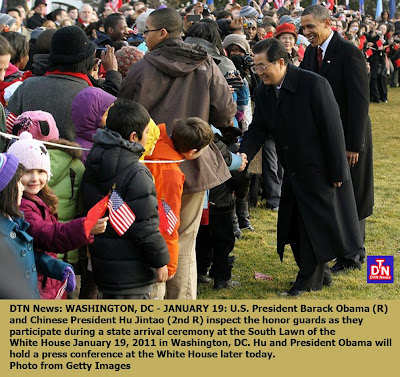 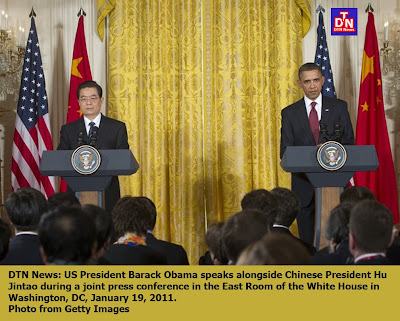 The agreement was achieved during official talks between the visiting Chinese President Hu Jintao and his US counterpart Barack Obama at the White House after a grand welcome ceremony was held outside on the South Lawn.

During the meeting, the two presidents fully confirmed the accomplishments made in recent years by developing a positive, cooperative and comprehensive China-US relationship.

Both sides confirmed that a sound China-US relationship is in the fundamental interests of the two peoples and benefits the peace, stability and prosperity within the Aisa-Pacific region and the world as well.

The two presidents agreed that both sides should strengthen their cooperation of mutual benefit in broad areas, enhance communications and coordination in international affairs, and further promote positive, cooperative and comprehensive China-US ties.

The two nations would also work with people of various countries to build a harmonious world of lasting peace and common prosperity.

Hu and Obama agreed to build a "positive, cooperative and comprehensive China-US relationship for the 21st century" during their first meeting in London in April 2009.

In November 2009, Obama paid a state visit to China, during which the two sides reiterated that they were "committed to building a positive, cooperative and comprehensive China-US relationship for the 21st century, and will take concrete actions to steadily build a partnership to address common challenges."

Speaking at the welcome ceremony, President Hu said he had come to the United States to increase mutual trust, enhance friendship, deepen cooperation and promote a positive, cooperative and comprehensive China-US relationship for the 21st century.

"President Hu and President Obama will map out a blueprint together for China-US cooperation for the new era. They will also have extensive and in-depth discussions on major topics of mutual interest," Chinese Foreign Minister Yang Jiechi said at a luncheon hosted by the Council on Foreign Relations in New York two weeks ago.

In a written interview with The Washington Post and The Wall Street Journal Monday, President Hu said, "China and the United States have major influence in international affairs and shoulder important responsibilities in upholding world peace and promoting common development."

"Under the new circumstances, the common interests of our two countries have been growing and areas of cooperation expanding," he said.

When meeting the Chinese foreign minister on January 4, Obama said he "looked forward to the visit of President Hu and to the US and China working together effectively to address global challenges."

US President Barack Obama said Wednesday that Chinese President Hu Jintao agreed with him on the need to fight climate change by moving ahead in international negotiations.

Meeting with Hu at the White House, Obama touched on last month's accord in Cancun, Mexico and the conference the previous year to Copenhagen that inched forward on setting up a new global agreement on climate change.

"I believe that as the two largest energy consumers and emitters of greenhouse gases, the United States and China have a responsibility to combat climate changes by building on the progress at Copenhagen and Cancun and showing the way to a clean energy future," Obama told a joint news conference.

"And President Hu indicated that he agrees with me on this issue," Obama said.

Hu said alongside Obama that China "will work with the United States and other countries to effectively address global challenge" including climate change.

The Obama administration has insisted that China -- which has surpassed the United States as the top emitter of greenhouse gases blamed for climate change -- take clear, verifiable action under the next international agreement.

The administration hopes that commitments by Beijing could also improve the environment in the US Congress, where many members of the rival Republican Party are deeply opposed to legislation on climate change.

The Cancun summit set up the practicalities for a global fund to distribute aid to the least developed countries that are expected to be worst affected by climate change.

While the summit's achievements were modest, the mood improved from the chaotic Copenhagen summit where China faced heavy criticism from the West over its role.

BAE Systems Norfolk Ship Repair, Norfolk, Va., is being awarded a $17,330,868 modification to previously awarded contract (N00024-05-C-4403) for the USS Wasp (LHD 1) fiscal 2011 Phased Maintenance Availability (PMA). A PMA includes the execution of depot-level maintenance, alterations, and modifications that will update, improve, and extend the ship's military and technical capabilities. Work will be performed in Norfolk, Va., and is expected to be completed by April 2011. Contract funds in the amount of $17,320,921 will expire at the end of the current fiscal year. Norfolk Ship Support Activity, Portsmouth, Va., is the contracting activity.

Oshkosh Corporation, Oshkosh, Wis., was awarded a $22,613,528 firm-fixed-price contract Jan. 14, 2011. The award will provide for the purchase of 301 B-Kit Armor Sets for Heavy Expanded Mobility Tactical Trucks. Work will be performed in Oshkosh, Wis., with an estimated completion date of June 30, 2011. One bid was solicited with one bid received. The U.S. Army TACOM LCMC, Warren, Mich., is the contracting activity (W56HZV-09-D-0024).

Oshkosh Corporation, Oshkosh, Wis., was awarded a $22,586,976 firm-fixed-price indefinite delivery/indefinite quantity contract Jan. 14, 2011. The award will provide for 972 man-months of support for the Mine Resistant Ambush Protected All Terrain Vehicle. Work will be performed in Oshkosh, Wis., with an estimated completion date of May 31, 2012. Five bids were solicited with five bids received. The U.S. Army TACOM LCMC, Warren, Mich., is the contracting activity (W56HZV-09-D-0111).

Superior Solutions, Inc., Huntsville, Ala., was awarded an $8,594,400 firm-fixed-price contract Jan. 14, 2011. The award will provide for labor and materials to support the Project Management Information System. Work will be performed in Huntsville, Ala., with an estimated completion date of Feb. 11, 2013. The bid was solicited through the Internet with six bids received. The U.S. Army Corps of Engineers, Vicksburg District, Vicksburg, Miss., is the contracting activity (W912HZ-08-D-0006).