Secretary of State Hillary Clinton unveiled the deal, which is subject to Congressional approval.

But the Obama administration will make clear it expects Islamabad to do more in the fight against Islamic militants.

The US has given Pakistan more than $1bn of military aid a year since 2005; last fiscal year, it gave nearly $2bn.

US officials said Pakistan needed further, specific assistance for the fight against militants and needed to know it could rely on the US in the long term.

So unlike previous military aid approved on a yearly basis, this is a five-year package.

The aid will pay for equipment needed in counter-insurgency and counter-terror operations, among other things.

'Reducing threats to US'

Vali Nasr, a senior adviser on Pakistan and Afghanistan at the state department, told the BBC that the battle against Pakistani militants had expanded over the last year, but the summer's monsoon floods had undone a lot of the Pakistani army's efforts.

"We believe that we have made a great deal of progress and we believe that that progress has reduced the threat to our homeland, while not eliminating it," Richard Holbrooke, the US special representative on Afghanistan and Pakistan, said this week.

But officials in Washington have also been frustrated at the limits of Pakistan's desire and ability to help.

A White House report sent to Congress earlier this month lamented the Pakistani army's inability to hold territory it had seized from insurgents, a failure that means gains are likely to be short-lived.

"The Pakistan military continued to avoid military engagements that would put it in direct conflict with Afghan Taliban or al-Qaeda's forces in North Waziristan," the report said, referring to the region in north-western Pakistan seen as a Taliban and al-Qaeda haven.

"This is as much a political choice as it is a reflection of an under-resourced military prioritising its targets."

The report also said the civilian leadership did not have the trust of the people and faced "broad-based" challenges that had "the potential to impact the stability of the government".

US officials said Pakistan needed further, specific assistance for the fight against militants

Mr Nasr said the solution was not to withdraw US investment from Pakistan, but rather to help the Pakistani government and military strengthen the country's institutions.

The Pakistani government is in fact crucial to that strategy, and this can make Washington vulnerable.

A crisis in ties between the two countries last month has highlighted the fine line the Obama administration must walk as it cajoles and pressures its ally.

After at least two Pakistani troops were killed in a Nato cross-border attack in September, a furious Islamabad blocked the main transit route for military supplies to Afghanistan until it received a formal apology.

During the row, dozens of lorries laden with fuel and supplies were destroyed by militants in Pakistan while en route to the frontier.

The US-Pakistan strategic dialogue, which started last year, is designed to build trust and keep the conversation going between the two countries, not just about security, but about a wide range of issues from healthcare to education and water projects.

The five-year package announced on Friday is meant to complement a $7.5bn package of civilian aid over five years that was approved by the US in 2009.

It is all designed to reduce Islamic militants' allure and to win Pakistanis' hearts.

"We want to expand the security relationship that Pakistan and the US had in the past under the Bush period to be much broader," Mr Nasr said, "to involve things that also matter to Pakistanis and impacts their daily lives.

"Average Pakistanis have to see value in their engagement with the US before they subscribe to that relationship."

But some question the Obama administration's approach, saying there are too many carrots and not enough sticks, and not enough conditions attached to the carrots.

In a piece published in the New York Times this week, the former ambassador to Afghanistan, Zalmay Khalilzad, urged Washington to "offer Islamabad a stark choice between positive incentives and negative consequences".

*THIS ARTICLE IS BEING POSTED FROM TORONTO, CANADA BY DTN NEWS ~ DEFENSE-TECHNOLOGY NEWS, CONTACT:DTNNEWS@YMAIL.COM
Posted by Defense-Technology News at 10/22/2010 04:38:00 PM No comments:

Source: DTN News - - This article compiled by Roger Smith from reliable sources
(NSI News Source Info) KABUL, Afghanistan - October 23, 2010: Afghan officials say Taliban militants have attacked a NATO convoy in southeastern Afghanistan, setting more than a dozen fuel tankers ablaze and killing at least three drivers.
A spokesman for the provincial governor said thirteen trucks carrying supplies for US-led foreign forces were destroyed in the Zabul Province attack, the Associated Press reported. Taliban militants have claimed responsibility for the attack that took place in Shahra Safa district on Thursday night. Militants have stepped up attacks on NATO supply convoys in Afghanistan and neighboring Pakistan over the past weeks. During this period large numbers of NATO trucks have been torched in Pakistan alone. Meanwhile, militants in Pakistan have warned they will continue attacks on NATO supply trucks as long as un-UN-sanctioned drone strikes target tribal areas. In a separate development, a bomb attack has killed a district governor and his bodyguard in eastern Afghanistan. The governor of Dur Baba in Nangarhar Province, identified only as Khorshid, was driving to work when the bomb struck his vehicle. Two more people were injured in the attack. Khorshid is the second district governor to be killed in Afghanistan in the past month. The security situation has been deteriorating across the war-torn country over the past few years. Violence has spread from Afghanistan's volatile south to relatively peaceful areas over the course of the past year despite the presence of some 150,000 foreign troops.
*THIS ARTICLE IS BEING POSTED FROM TORONTO, CANADA BY DTN NEWS ~ DEFENSE-TECHNOLOGY NEWS, CONTACT:DTNNEWS@YMAIL.COM
Posted by Defense-Technology News at 10/22/2010 04:23:00 PM No comments: 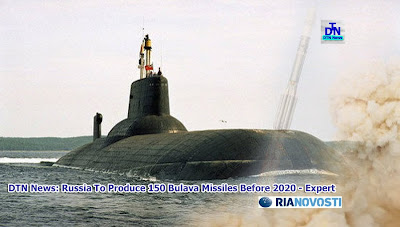 Igor Korotchenko, editor-in-chief of the National Defense magazine, told RIA Novosti that at least 124 missiles would be required for the eight Borey class nuclear-powered submarines that will enter service over the next decade, and a further 30 or 40 will have to be set aside for test launches.

In order to reach that goal, the capacities of the only plant producing Bulava missiles, near the town of Votkinsk in the Urals, will have to be increased, he said.

The development of the Bulava has been beset by problems, but the latest test launch was successful.

The missile, which was fired from the Dmitry Donskoy submarine in the White Sea on October 7, hit its designated target in the Kura test range in Russia's Far Eastern Kamchatka region.

Test launches were put on hold after a failed launch on December 9, 2009, which was caused by a defective engine nozzle.

Two more test launches are planned before the end of the year: one from the Dmitry Donskoy sub, and the other from Russia's newest strategic nuclear-powered submarine, the Borey class Yury Dolgoruky.

The CSTO Collective Rapid Reaction Force drills will take place on October 25-29 at the Chebarkul training ground in Russia's Urals region of Chelyabinsk.

"On October 22, pilots of the Russian Su-24 and Su-27 aircraft and Mi-24 helicopters together with Kazakh Su-25 pilots will conduct drills with live firing at the Chebarkul training grounds in the Central military district," a spokesman for the ministry said on Thursday.

The upcoming CSTO drills will involve 1,700 servicemen, 250 armored vehicles and over 30 combat aircraft and helicopters.

The CSTO is a security grouping comprising the former Soviet republics of Armenia, Belarus, Kazakhstan, Kyrgyzstan, Russia, Uzbekistan, and Tajikistan.

Five of the seven members signed an agreement on the creation of the Collective Rapid Reaction Force in February 2009. Belarus, which initially refrained from signing the deal because of a trade dispute with Russia, joined later last year.

The CSTO members say the rapid reaction force is designed to improve the security of the CSTO members against existing and potential threats, including terrorism, extremism, drug trafficking and natural disasters, and to enhance the organization's role in ensuring international security.

However, many observers see the creation of a powerful military contingent in former Soviet Central Asia by members of the Russian-dominated security grouping as a bid to counterbalance NATO.

PARIS - A technical fault has forced France's flagship and only aircraft carrier to return to port less than a day after it set off to fight piracy and terrorism in the Indian Ocean, the navy said Oct. 14. ... full story 14 Oct 10:24 EDT (14:24 GMT)

Moving ahead with the paperwork necessary to divest itself of its shipbuilding operations, Northrop Grumman announced Oct. 15 it had filed a Form 10 registration statement with the federal government. ... full story 15 Oct 11:46 EDT (15:46 GMT)

Two virtually unused high-speed ferries once planned for service in the Hawaiian Islands have been acquired by the U.S. government at apparently bargain-basement prices. ... full story 13 Oct 17:28 EDT (21:28 GMT)

UMM QASR, Iraq - Iraq inaugurated the first in a fleet of U.S.-built patrol boats on Sept. 26, part of efforts to boost its naval capacity and secure key oil platforms ahead of an American pullout next year. ... full story 26 Sep 09:39 EDT (13:39 GMT)