The administration could move ahead within two weeks on the proposal to let Italy join Britain in deploying U.S. drones with weapons such as laser-guided bombs and Hellfire missiles, American officials said.
Italy has a fleet of six Reapers. The sale of the technology to arm them, including bomb racks and "weaponization" kits costing up to $17 million, would help the United States redistribute the burden of its global military operations as the Pentagon's budget is being squeezed by deficit-reduction requirements.
Aides to Obama have been informally consulting the House of Representatives' and Senate's foreign affairs committees about the proposed sale to Italy since last year, congressional staff said.
The latest such period of "pre-consultations" ended May 27 without a move to block the sale, according to the Wall Street Journal, which first reported the coming formal notification to lawmakers.
A transfer to Italy would make it harder for the United States to deny armed-drone technology if asked for it by other members of the 28-country NATO alliance or by close U.S. partners such as South Korea, Japan and Australia, arms-sale analysts said.
"I think that if you sell armed drones to Italy, you will very likely make a decision that any member of NATO that wants them can also get them," said a former congressional staff member who followed the issue.
Some lawmakers fear that a decision to arm Italian drones may spur overseas sales of related technology by Israel, Russia and China.
The United States has used its MQ-9s to hunt and kill members of al Qaeda and its allies in Afghanistan, Iraq, Yemen, Somalia and Pakistani tribal areas.
Britain, the first foreign country to get U.S. technology to arm its Reapers, is considered a special case. Many U.S. officials and members of Congress view it as Washington's staunchest and most reliable ally.
The State Department does not comment on proposed sales of U.S. military hardware until formal notifications have been completed. But a State Department official described Italy as a strong NATO ally which contributes significantly to coalition operations.
"The transfer of U.S. defense articles and service to allies like Italy enables us to work together more effectively to meet shared security challenges," said the official, who declined to be named.SPREAD DRONES, OR LIMIT THEM?
Senator Dianne Feinstein, chairwoman of the Senate Intelligence Committee, has publicly opposed the transfer of armed drones. "There are some military technologies that I believe should not be shared with other countries, regardless of how close our partnership," Feinstein, a California Democrat, said last year.
She said she would put armed drones in the category of weapons the United States should try to rein in, not spread.
Turkey is among countries that have been seeking to buy U.S. unmanned aerial vehicles, or UAVs. The MQ-9 Reaper is larger and more capable than the earlier MQ-1 Predator, both built by General Atomics.
Turkish President Abdullah Gul said on the sidelines of a NATO summit in Chicago last week that Obama was leaning toward selling UAVs to Turkey, which has fought separatist Kurdish rebels for decades in a conflict that has killed 40,000 people."The administration's position (toward a sale) is favorable," Turkey's state-run Anadolu news agency quoted Gul as saying after he met Obama. "They are trying to convince Congress."
A proposed U.S. arms sale to Turkey may proceed unless lawmakers enact joint resolution barring it, an event that has never occurred.
The Obama administration says that all exports of sensitive military technology are considered on a case-by-case basis under a general policy of "restraint," taking into account national security and foreign-policy considerations as well as U.S. multilateral commitments.Purchasers of U.S.-made military systems must agree to a strict set of "end-use" conditions designed to limit the system to approved uses such as self-defense and United Nations missions. They also must agree to let the United States monitor their adherence to these conditions.
Italy has sought to arm its drones for use in Afghanistan, where it maintains about 3,950 troops. But it initially wanted the drones themselves for such things as border patrols, the former congressional staff member said.
TEAL Group, a U.S. aerospace consultancy, estimated in April that worldwide UAV spending will almost double over the next decade, totaling more than $89 billion in the next 10 years.(Editing by Christopher Wilson)*Link for This article compiled by Roger Smith from reliable sources Reuters*Speaking Image - Creation of DTN News ~ Defense Technology News *This article is being posted from Toronto, Canada By DTN News ~ Defense-Technology News Contact:dtnnews@ymail.com ©COPYRIGHT (C) DTN NEWS DEFENSE-TECHNOLOGY NEWS 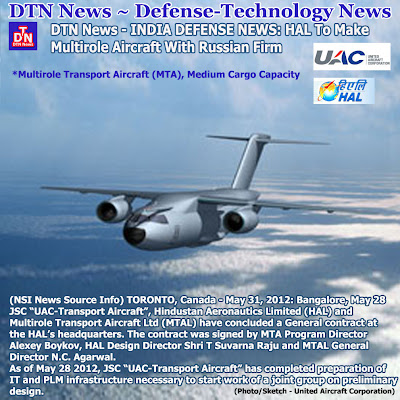 In its transport fleet, the IAF has about 100 AN-32, including some overhauled and upgraded versions.
To execute the $600-million defence project, the $2.6-billion HAL entered into a contract here Monday with United Aircraft Corporation (UAC) of Russia and the 50:50 joint venture they have set up - Multirole Transport Aircraft Ltd.Capable of short landings and takeoffs, the aircraft will have capacity to ferry about 80 troops, infantry fighting vehicles, artillery pieces and ammunition and can be deployed for battlefield medical evacuation.With a glass cockpit for electronic instrument displays, fly by wire controls and full authority digital engine control, the aircraft will have 800kmph cruise speed and a range of 2,500km without refuelling.HAL will design and develop the MTA at its aircraft research and development (ARDC) centre in this tech hub, while its transport aircraft division at Kanpur in Uttar Pradesh will manufacture prototypes and commence serial production after the certification process."Our objective is to achieve self-reliance in design, development and production of a MTA and manage the programme with international collaboration and global suppliers," Tyagi said.The first test flight of the prototype will be in five years (2017) and regular production two years later (2019).
HAL will also share the development cost of systems and manufacture of components, sub-assemblies and composite structure.The tripartite contract was based on the inter-government pact signed in September 2010 by the Indian and Russian governments for joint design, development and production of the aircraft on cost sharing basis by the joint venture partners.The joint venture will also work with Russia's aerospace major Rosoboronexport to co-develop the aircraft."We will showcase our expertise in designing the aircraft and its systems, manufacturing and flight testing in collaboration with our Russian partners in Moscow and India," Tyagi said.The Kanpur facility had manufactured transport aircraft such as Avros HS-748 and Dornier Do-228 in the past for the services.In all, the company manufactured 89 Avros from 1964 to 1984 and 116 Dorniers from 1984 to March 2012.
Two Dorniers were exported to Mauritius, while one export order to Seychelles is under execution.

Design features
Performance
Scheme (3 view)
Cargo compartment scheme (in cross section)
Cargo compartment scheme (in axial section)
Developed by: JSC United Aircraft Corporation –Transport Aircraft, Russia, Hindustan Aeronautics Limited (HAL), India
Project stage: design
The Multirole Transport Aircraft (MTA) is a joint international project of JSC United Aircraft Corporation –Transport Aircraft and Hindustan Aeronautics Limited (HAL) of India. It is being developed within the framework of the Russo-Indian intergovernmental agreement.
The research of the world market indicates a strong demand for transport aircraft with cargo capacity of up to 20 tonnes and a flight range up to 3,000 km. According to the regulatory documents the MTA is classified as medium cargo capacity military transport aircraft designed for strategic and tactical missions. The MTA provides for transportation of a wide range of cargoes up to 12,000 kg over a range of 4,700 km and up to 20,000 kg over a range of 2,000 km around-the-clock in any geographic areas and under any climate and meteorological conditions.
As a military transport aircraft MTA can perform the following tasks:
-Military personnel transportation (up to 140 people),
-Paratroopers deployment (up to 90 people),
-Transportation of cargo, equipment, all-purpose shipping containers and aircraft containers and pallets,
-Parachuting of cargo and equipment on the platforms,
-Low altitude free fall cargo drop.
The MTA is capable to airlift up to 80% of all existing weapons and military equipment. This capacity is mainly determined by three key features: the MTA’s design dimensions, its cargo department’s size and volume, and its power plant. The MTA’s size of the airtight cargo compartment’s cross section is identical to this of the heavy Il-76MD military transport aircraft. This allows employing all existing loading and unloading equipment, transportation and air dropping equipment and tools. The MTA’s pilots and technical personnel can manage transportation tasks and execute pre-flight procedures on their own (independently from the main base airport), these tasks require from 2 to 6 people.
The high thrust-to-weight ratio ensures the MTA’s operability from airfields in high mountains (on the altitude of up to 3,300 m above the sea-level) both from paved and unpaved runways (capable to sustain pressure up to 8 kg/cm2, that allows its operations on more than 90% of the Russian airfields). The MTA’s performance also is on par with current aircraft’s fuel efficiency level.
Considering high export potential of the aircraft, its design ultimately meets the requirements not only of both Russian and Indian Air Forces but of potential customers as well. It is expected that in 2015-2020 a number of developing countries can consider the new transport aircraft as an alternative not only for An-12 and C-130 Hercules but to a smaller An-26. The strong advantage of the MTA in comparison with its rivals is its relatively low price.
It is supposed that both parties will take part in the MTA program during all its stages. At present, the conceptual phase works have been completed. The joint detailed business plan of the project has been worked out and initialed. The parties established the Russo-Indian joint venture, Multirole Transport Aircraft Limited. It is expected that the Russian and Indian sides will finance the project on par. The first flight of the MTA is planned for 2016
Related News;