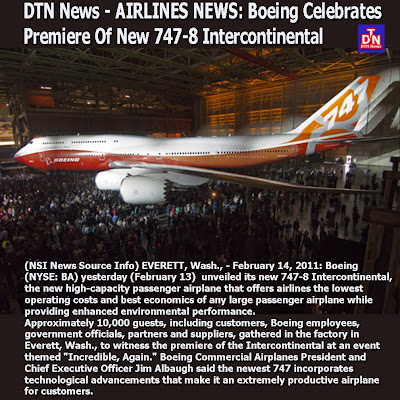 Approximately 10,000 guests, including customers, Boeing employees, government officials, partners and suppliers, gathered in the factory in Everett, Wash., to witness the premiere of the Intercontinental at an event themed "Incredible, Again." Boeing Commercial Airplanes President and Chief Executive Officer Jim Albaugh said the newest 747 incorporates technological advancements that make it an extremely productive airplane for customers.

"The new 747-8 Intercontinental features the latest in innovative technologies — applying many of the breakthroughs also found on the 787 Dreamliner," said Albaugh. "We think our customers will value the low operating costs and passengers will enjoy the comfort of the striking new interior."

"The 747-8 Intercontinental will be a great complement to our fleet, fitting nicely into the 400-seat category, improving our fleet's eco-efficiency even further," said Nico Buchholz, executive vice president, Lufthansa Group Fleet Management. "As launch customer, we are looking forward to welcoming this new aircraft to our fleet next year as it adds to our ongoing fleet modernization and environmental efforts."

"As the only airplane in the 400 to 500-seat market, the 747-8 Intercontinental will give operators an airplane perfectly suited for long, heavily traveled routes around the world," said Pat Shanahan, vice president and general manager, Airplane Programs, Boeing Commercial Airplanes. "The new 747-8 Intercontinental will set a new standard in economic and environmental performance, while providing a world-class passenger experience."

The 747-8 Intercontinental will have the lowest seat-mile cost of any large commercial jetliner, with 12 percent lower costs than its predecessor, the 747-400. The airplane provides 16 percent better fuel economy, 16 percent less carbon emissions per passenger and generates a 30 percent smaller noise footprint than the 747-400. The 747-8 Intercontinental applies interior features from the 787 Dreamliner that includes a new curved, upswept architecture giving passengers a greater feeling of space and comfort, while adding more room for personal belongings.

The airplane unveiled today is painted in a new Sunrise livery of red-orange that only will appear on the first 747-8 Intercontinental and is a significant departure from Boeing's standard blue. The new color palette honors many key Boeing customers whose cultures recognize these colors as symbols of prosperity and good luck.

Raytheon-BBN Technologies, Inc., Cambridge, Mass., was awarded a $54,340,021 firm-fixed-price contract Feb. 9, 2011. The award will provide for the purchase of 300 Boomerang III Perimeter Defense Systems in support of the Army's mission in Operation Enduring Freedom. Work will be performed in Cambridge, Mass., with an estimated completion date of Aug. 10, 2011. One bid was solicited with one bid received. The U.S. Army Contracting Command, Fort Belvoir, Va., is the contracting activity (W909MY-11-C-0028). 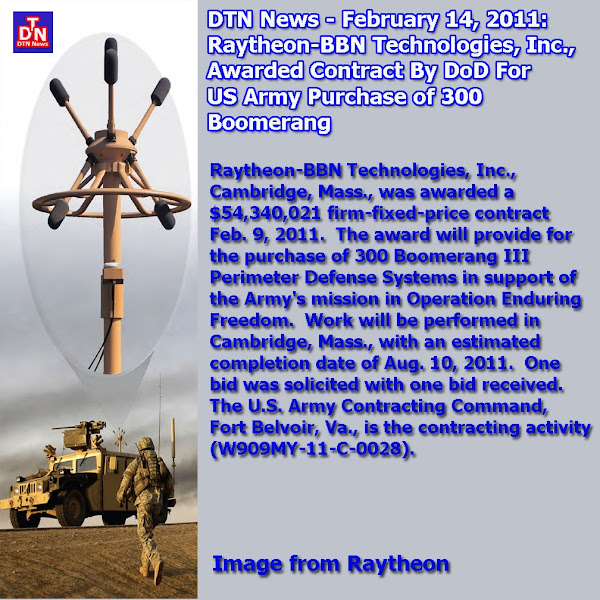 Lockheed Martin, Syracuse, N.Y. is being awarded a $13,445,304 modification to previously awarded contract (N00024-07-C-5202) for engineering services in support of the Navy's AN/SQQ-89A(V)15 Undersea Warfare System. The AN/SQQ-89A(V)15 is a surface ship combat system with the capabilities to search, detect, classify, localize and track undersea contacts; and to engage and evade submarines, mine-like small objects, and torpedo threats. Work will be performed in Syracuse, N.Y. (80% percent), Newport, R.I. (16 percent), and Manassas, Va. (4 percent), and is expected to be completed by September 2011. Contract funds in the amount of $130,000 will expire at the end of the current fiscal year. The Naval Sea Systems Command, Washington, D.C., is the contracting activity.

Raytheon Company, Integrated Defense Systems, Tewksbury, Mass., is being awarded a $7,913,491 modification to previously awarded contract (N00024-10-C-5126) to exercise options for engineering, integration, and production services for the DDG 1000 Zumwalt-class destroyer program. The contractor will perform test and evaluation, design solution, and integrated logistics support class services. Work will be performed in Portsmouth, R.I. (65.0 percent), Dulles, Va. (25.0 percent), Largo, Fla. (8.0 percent), Tewksbury, Mass. (1.0 percent) and Washington, D.C. (1.0 percent). Work is expected to be completed by November 2011. Contract funds in the amount of $1,904,468 will expire at the end of the current fiscal year. The Naval Sea Systems Command, Washington, D.C., is the contracting activity. 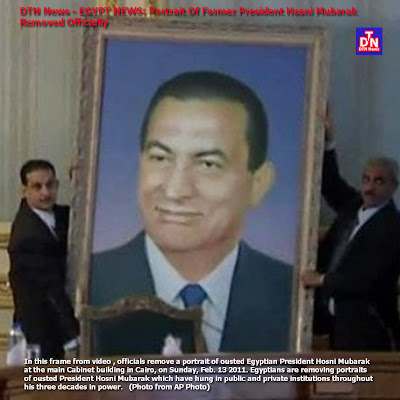 "An earthquake is shaking the whole Arab world and a large part of the Muslim world and we don't yet know how these things will turn out," the premier said at a swearing-in ceremony for new army chief Major General Benny Gantz.

"We are ready for all eventualities because we know that the foundation of our existence, and our capacity to convince our neighbours to live in peace with us, is based on the Israeli army," he said during a ceremony at his Jerusalem office.

Gantz takes over the post as Israel's strategic stance in the Middle East undergoes a shakeup in the wake of a popular revolt in Egypt which ousted president Hosni Mubarak after three decades in power.

Israel has reacted cautiously to the overthrow of Mubarak, an ally who was involved in years of Middle East peace negotiations.

But it welcomed a statement by Egypt's new military ruling council that Cairo remains committed to all its treaties, including its landmark 1979 peace deal with Israel.

Jewish Telegraphic Agency - ‎1 hour ago‎
JERUSALEM (JTA) -- An Egyptian opposition leader has declared his country's three-decades-old peace treaty with Israel is over. Ayman Nour, the head of the ...

AFP - ‎5 hours ago‎
JERUSALEM — The Israeli military is "ready for all eventualities" as the Arab and Muslim world undergoes "an earthquake," Israel's Prime Minister Benjamin ...

Jerusalem Post - ‎6 hours ago‎
By JPOST.COM STAFF Hamas leader in Gaza Mahmoud al-Zahar called on Egypt to provide electricity and water to the Gaza Strip and to open the Rafah Crossing ...

Egypt presidential hopeful: Peace treaty with Israel is over

Ha'aretz - ‎6 hours ago‎
Dr. Ayman Nur, a secular and liberal member of the opposition, tells Egypt radio that it would behoove the new government to renegotiate the terms of the ...

Egyptian peace with Israel holds, say officials on both sides

New York Daily News - Helen Kennedy - ‎7 hours ago‎
Egyptian and Israeli officials assured nervous observers on Sunday that the peace treaty between their two nations will not be rocked by ...

Egyptian presidential candidate: Peace with Israel is over

Globes - ‎7 hours ago‎
Although the Egyptian army has announced that it will honor the country's peace agreements with Israel, a worrying signal came yesterday evening from a ...

Boston Globe - ‎8 hours ago‎
AP / February 14, 2011 JERUSALEM — The downfall of Egypt's president, Hosni Mubarak, appears to have nudged Israel and the Palestinians toward some common ...

Under the (Egyptian) volcano

Asia Times Online - Pepe Escobar - ‎9 hours ago‎
The party - and what a party - is over. Now it's hangover time - and what a hangover. Meet the new boss, or the Pharaoh rebuilt as Shiva; ...

Ynetnews - ‎9 hours ago‎
The Israeli cabinet is cliché-driven and Jerusalem used the crisis in Egypt to to score propaganda points to the point where the White House was disgusted ...

Egypt, Israel, and the sudden return of Land for Peace

Ha'aretz (blog) - Bradley Burston - ‎9 hours ago‎
When the revolution began in Egypt, many in Israel expected it to fail. What is more telling, though, is that so many in Israel quietly wanted it to. ...

For Israel, peace with Egypt is not just an asset

Ha'aretz - Shlomo Avineri - ‎9 hours ago‎
In wake of the upheaval that has swept through Egypt and much of the region, it is important to remind ourselves that peace with Egypt is a moral value as ...

Sify - ‎11 hours ago‎
The alarm and anxiety that was quite visible in Israel last week as the revolution in Egypt was unfolding, leading to the eventual exit of President Hosni ...

Jews in US Are Wary In Happiness For Egypt

New York Times - Laurie Goodstein - ‎14 hours ago‎
Across the political spectrum, American Jewish leaders say that when they consider the future in Egypt and what it means for Israel, ...

Egypt's peace treaty with Israel: what course to follow?

Mubarak no friend of Israel

Ynetnews - Nechama Duek - ‎18 hours ago‎
We must admit that Egypt's ousted president, Hosni Mubarak, did not have a pro-Israel agenda. He did not want to get close to Israel or be Israel's friend. ...

National Business Review - ‎18 hours ago‎
Prime Minister John Key has rejected claims he was placing Western interests above the rights of Egyptian people by not calling for Hosni Mubarak to step ...

Tehran Times - ‎18 hours ago‎
Hanin Zoubi , an Arab member of Israel's parliament (Knesset) has predicted a Palestinian revolution, modeled after the one in Egypt, which terminated three ...

Tehran Times - ‎21 hours ago‎
This column features excerpts from the editorials, commentaries, and news articles of the leading Iranian newspapers. JAM-E JAM in an article says the ...

Newsday (subscription) - Josef Federman - ‎21 hours ago‎
Photo credit: AP | A Palestinian holds up an Egyptian flag during a demonstration in support of the Egyptian people, ...

Egyptian envoy to US: Peace treaty with Israel will stand