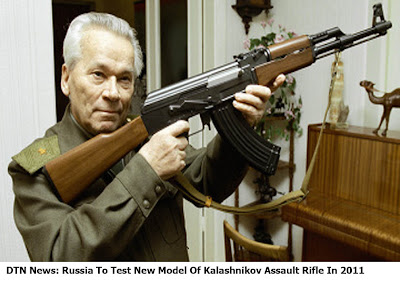 Vladimir Grodetsky said on Tuesday. The new model of the legendary assault rifle, the AK-200, is based on the AK-74M and differs in weight (3.8 kilograms/8.4 lbs vs. 3.3 kilograms/7.3 lbs) and the magazine capacity (30, 50, 60 rounds vs. 30). The AK-74, a developed version of the Kalashnikov rifle's first model, the AK-47, was introduced in 1974 and used by the Soviet forces during the Afghanistan conflict. The AK-47 was originally created by Mikhail Kalashnikov, who as a WWII soldier was inspired to design the weapon after being wounded in 1941. While his first attempts were unsuccessful, he was given a position in weapons development, and by 1947 he had perfected his masterpiece. Since then, the AK-47 has become the most widespread and famous assault rifle. Used by some 50 armies around the world, as well as countless urban guerrilla movements, it is also featured on the flag of Mozambique. Kalashnikov received Russia's highest honorary title on his 90th birthday last November. Accepting the award, Kalashnikov voiced regret that his creation, the world's most widely used rifle, has been often misused. Russian President Dmitry Medvedev described the AK-47 at the ceremony as "an excellent model of Russian weaponry" and "a national brand that makes each citizen proud."
Related News Ten countries to build Kalashnikov assault rifle producing plants Mikhail Kalashnikov, father of the AK-47, turns 90 Russia, China draft Kalashnikov copyright deal Russia's legendary Kalashnikov producer faces bankruptcy
Posted by Defense-Technology News at 5/29/2010 07:57:00 PM No comments:

Source: DTN News / DTN Defense News
(NSI News Source Info) WASHINGTON - May 30, 2010: US military planners are looking at options for a unilateral strike in Pakistan, for use if a successful attack on US soil is traced to Pakistani tribal areas, The Washington Post reported late Friday.

US retaliation would be contemplated only under extreme circumstances, unnamed senior military officials said.

These circumstances might include a catastrophic attack that convinced President Barack Obama that the ongoing campaign of CIA drone strikes was insufficient.

"Planning has been reinvigorated in the wake of Times Square," one official told the newspaper.

The report comes in the wake of the failed May 1 attack on New York's crowded Times Square, which is in the city's busy theatre district.

Faisal Shahzad, a 30-year-old Pakistani-born naturalised US citizen, was arrested apparently trying to flee the country on a flight to Dubai 53 hours after street vendors alerted police to smoke coming out of a vehicle there.

The van was found to contain a bomb consisting of timers, wires, fireworks, gasoline, propane tanks and fertilizer.

Shahzad is due for a federal court hearing in New York on June 1.

US officials say Shahzad is connected to Pakistani Taliban insurgents and Obama has sent two senior national security aides to Islamabad to join the investigation into the May 1 car bombing attempt.

According to The Post, the US administration is trying to deepen ties to Pakistan's intelligence officials in a bid to head off any attack by militant groups.

The two countries recently established a joint military intelligence center on the outskirts of the northwestern city of Peshawar, and were in talks to set up another one near Quetta, the paper said. 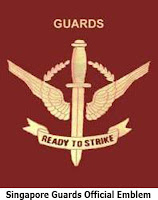 ed Forces, the Guards are an elite infantry formation specializing in rapid deployment. Guards are known as elite heliborne troopers. They are well trained in heliborne operations and specialist combat skills that give them an added combat edge. They are proficient in heli-rappelling, heli-landing, and other specialised skills that allow them to carry out heliborne operations in various terrain, day and night. They are specially trained thus earning them the respect and status in the Singapore Armed Forces. The formation traces its roots back to the 7th Singapore Infantry Brigade and has been actively involved in several National and Army Day events since the establishment of the modern Guards unit.
As an elite formation, the brigade is called to fight in certain areas, such as urban locations with FIBUA (Fighting in Built Up Areas) and FOFO (Fighting On Fortified Objectives) tactics. Trained in amphibious warfare, Guards units may also be tasked to seize important objectives such as airfields, beach heads, dep 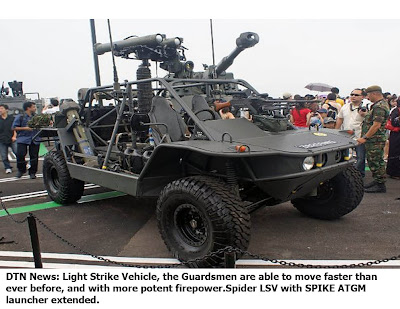 ots as well as enemy strongholds, thereby establishing a foothold for the rest of the army. In the continually evolving 3rd Generation SAF, the spectrum of Operations that the Guards formation are involved in has been extended to include non-war related operations (OOTW - Operations Other Than War) such as HADR (Humanitarian Assistance and Disaster Response) Operations as well as PSOs (Peace Support Operations). As evident in the recent disasters such as the Asian Tsunami Disaster of 2004, the Guards formation has been at the forefront of providing a quick response platform to humanitarian operations. This is entrenched and complementary to the Guards Formation's role as a quick reactionary force. However it must be noted that the Guards Formation's role is integral and complimentary to the role of the other formations in such peace-time theatres of operations. The Guards formation is also called upon to react to counter-terrorism operations such as the recent Mas Salamat escape in which the active Guards Battalion was activated to cordon and assist in the search for the fugitive suspect.
The Guards utilize all small arms known to be in use with the Singaporean army, such as the SAR-21 assault rifle family, the Ultimax 100 Mark 3 LMG, FN MAG, M203, and the Matador anti-tank rocket launcher.
Apart from the helicopters, the Guards also utilize The Light Strike Vehicle (LSV), a lightweight vehicle that is extremely mobile and agile procured by the Army to replace the jeeps which formerly carried their 106 mm recoilless guns. Manufactured in Australia based on an American design, the vehicle is able to access difficult terrain, and provide greater mobility and added firepower to the Guardsmen and Infantry soldiers. Weighing 1,500 kg, the LSV can be rapidly deployed by slinging it underneath a helicopter and inserting it into enemy territory. The LSV, which functions with an automatic gear, can go to more places than normal wheeled vehicles; for example, cross-country, going into closed terrain, capable of pushing down small brush and trees. Even in muddy areas the LSV is able to negotiate the conditions better than other vehicles like Jeeps and Land Rovers. In 2008, the Guards formation began to utilize the PLUV (Protected Light Utility Vehicle) which is an armoured version of the Ford Everest, the Ford Everest is also a replacement vehicle for the aging Land Rovers.
The LSV actually allows for different weapon configurations. It can be mounted with other weapon systems such as the 40 mm Automatic Grenade Launcher (AGL) or the advanced Anti-Tank Guided Missile (ATGM). The latest addition to the LSV armament is the Israeli SPIKE ATGM, giving the Guards the capability to destroy tanks at a 4 km range. Fitting the LSV with an Infra-Red adaptor gives it night vision capabilities as well.
The LSV, which can move at a maximum speed of 110 km/h, significantly enhances the mobility of the foot soldiers. The soldiers can now bring heavier and better firepower systems into operations. With the help of the Light Strike Vehicle, the Guardsmen are able to move faster than ever before, and with more potent firepower.
Posted by Defense-Technology News at 5/29/2010 12:28:00 PM No comments: 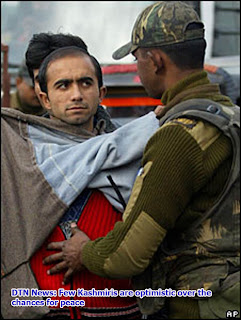 Source: DTN News / By Alastair Lawson BBC News
(NSI News Source Info) LONDON, U.K. - May 29, 2010: A survey which a British academic says is the first systematic attempt to establish the opinions of Kashmiris has produced "striking results". Robert Bradnock interviewed more than 3,700 people in Indian- and Pakistani-administered Kashmir to assess their views on various issues. One of the key questions put to respondents was how they saw the future of the territory. Nearly half of those interviewed said they wanted independence. Another question asked for their views over the continuing insurgency. Dr Bradnock - an associate fellow at the Chatham House think-tank in London - says that the survey has produced startling conclusions, especially in relation to the future of the territory.
No 'simple fixes' It revealed that on average 44% of people in Pakistani-administered Kashmir favoured independence, compared with 43% in Indian-administered Kashmir. "However while this is the most popular option overall, it fails to carry an overall majority on either side. "In fact on the Indian side of the Line of Control [LoC] - which separates the two regions - opinions are heavily polarised," Dr Bradnock told the BBC. The Kashmir insurgency has raged for 20 years The survey found that the "overwhelming majority" of people want a solution to the dispute, even though there are no "simple fixes". Dr Bradnock said that in the Kashmir valley - the mainly Muslim 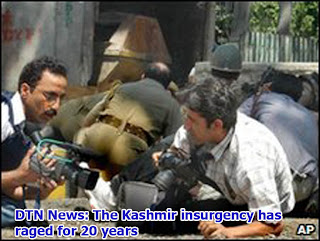 area at the centre of the insurgency - support for independence is between 74% and 95%. But in the predominantly Hindu Jammu division to the south, support is under 1%. Other findings include: **80% of Kashmiris on both sides of the LoC say that the dispute is important to them personally **Concern over human rights abuses stands at 43% on the Indian side and 19% on the Pakistani side **Concern over unemployment is strong across the territory - 66% on the Pakistani side and 87% on the Indian side **Few are optimistic over peace talks - only 27% on the Pakistani side and 57% on the Indian side thought they would succeed. Dr Bradnock said that it was "clear" that a plebiscite on the future of Kashmir - along the lines envisaged in UN resolutions of 1948-49 - is "extremely unlikely to offer a solution today". "The results of the polls show that that there is no single proposition for the future of Kashmir which could be put to the population... and get majority support," he said. "The poll offers no simple fixes but offers signposts - through which the political process, engaging India, Pakistan and wider Kashmiri representation - could move it towards resolution."
Posted by Defense-Technology News at 5/29/2010 03:37:00 AM No comments: