DTN News - DEFENSE & INTELLIGENCE NEWS: China's Cyber Thievery Is National Policy—And Must Be Challenged*It is more efficient for the Chinese to steal innovations and intellectual property than to incur the cost and time of creating their own.

Source: DTN News - - This article compiled by Roger Smith from reliable sources WSJ – Mike McConnell, Michael Chertoff, William Lynn (NSI News Source Info) TORONTO, Canada - February 5, 2012:Only three months ago, we would have violated U.S. secrecy laws by sharing what we write here—even though, as a former director of national intelligence, secretary of homeland security, and deputy secretary of defense, we have long known it to be true. The Chinese government has a national policy of economic espionage in cyberspace. In fact, the Chinese are the world's most active and persistent practitioners of cyber espionage today. 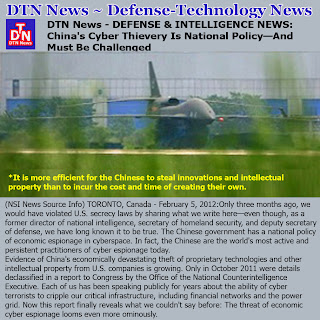 Evidence of China's economically devastating theft of proprietary technologies and other intellectual property from U.S. companies is growing. Only in October 2011 were details declassified in a report to Congress by the Office of the National Counterintelligence Executive. Each of us has been speaking publicly for years about the ability of cyber terrorists to cripple our critical infrastructure, including financial networks and the power grid. Now this report finally reveals what we couldn't say before: The threat of economic cyber espionage looms even more ominously.
The report is a summation of the catastrophic impact cyber espionage could have on the U.S. economy and global competitiveness over the next decade. Evidence indicates that China intends to help build its economy by intellectual-property theft rather than by innovation and investment in research and development (two strong suits of the U.S. economy). The nature of the Chinese economy offers a powerful motive to do so.
According to 2009 estimates by the United Nations, China has a population of 1.3 billion, with 468 million (about 36% of the population) living on less than $2 a day. While Chinese poverty has declined dramatically in the last 30 years, income inequality has increased, with much greater benefits going to the relatively small portion of educated people in urban areas, where about 25% of the population lives.
The bottom line is this: China has a massive, inexpensive work force ravenous for economic growth. It is much more efficient for the Chinese to steal innovations and intellectual property—the source code of advanced economies—than to incur the cost and time of creating their own. They turn those stolen ideas directly into production, creating products faster and cheaper than the U.S. and others.
Cyberspace is an ideal medium for stealing intellectual capital. Hackers can easily penetrate systems that transfer large amounts of data, while corporations and governments have a very hard time identifying specific perpetrators.
Unfortunately, it is also difficult to estimate the economic cost of these thefts to the U.S. economy. The report to Congress calls the cost "large" and notes that this includes corporate revenues, jobs, innovation and impacts to national security. Although a rigorous assessment has not been done, we think it is safe to say that "large" easily means billions of dollars and millions of jobs.
So how to protect ourselves from this economic threat? First, we must acknowledge its severity and understand that its impacts are more long-term than immediate. And we need to respond with all of the diplomatic, trade, economic and technological tools at our disposal.
The report to Congress notes that the U.S. intelligence community has improved its collaboration to better address cyber espionage in the military and national-security areas. Yet today's legislative framework severely restricts us from fully addressing domestic economic espionage. The intelligence community must gain a stronger role in collecting and analyzing this economic data and making it available to appropriate government and commercial entities.
Congress and the administration must also create the means to actively force more information-sharing. While organizations (both in government and in the private sector) claim to share information, the opposite is usually the case, and this must be actively fixed.
The U.S. also must make broader investments in education to produce many more workers with science, technology, engineering and math skills. Our country reacted to the Soviet Union's 1957 launch of Sputnik with investments in math and science education that launched the age of digital communications. Now is the time for a similar approach to build the skills our nation will need to compete in a global economy vastly different from 50 years ago.
Corporate America must do its part, too. If we are to ever understand the extent of cyber espionage, companies must be more open and aggressive about identifying, acknowledging and reporting incidents of cyber theft. Congress is considering legislation to require this, and the idea deserves support. Companies must also invest more in enhancing their employees' cyber skills; it is shocking how many cyber-security breaches result from simple human error such as coding mistakes or lost discs and laptops.
In this election year, our economy will take center stage, as will China and its role in issues such as monetary policy. If we are to protect ourselves against irreversible long-term damage, the economic issues behind cyber espionage must share some of that spotlight.
Mr. McConnell, a retired Navy vice admiral and former director of the National Security Agency (1992-96) and director of national intelligence (2007-09), is vice chairman of Booz Allen Hamilton. Mr. Chertoff, a former secretary of homeland security (2005-09), is senior counsel at Covington & Burling. Mr. Lynn has served as deputy secretary of defense (2009-11) and undersecretary of defense (1997-2001).
*LINK FOR THIS ARTICLE COMPILED BY ROGER SMITH FROM RELIABLE SOURCES WSJ – MIKE MCCONNELL, MICHAEL CHERTOFF, WILLIAM LYNN
*Speaking Image - Creation of DTN News ~ Defense Technology News *This article is being posted from Toronto, Canada By DTN News ~ Defense-Technology News Contact:dtnnews@ymail.com ©COPYRIGHT (C) DTN NEWS DEFENSE-TECHNOLOGY NEWS

Source: DTN News - - This article compiled by Roger Smith from reliable sources Reuters (NSI News Source Info) TORONTO, Canada - February 5, 2012:  There's an apocryphal story about Bihar, a sprawling state on the Gangetic plains of eastern India that for decades held the dubious honor of being the most violent, poverty-stricken and corrupt in the land.A Japanese minister visiting in the 1990s, shocked at the decrepit buildings, the darkness at night even in the centre of town and the crumbling roads, declared that it was all solvable.

"Give me three years," he told a state leader, "and I can turn Bihar into Japan."
"That's nothing," came the laconic reply from his host. "Give me three days and I will turn Japan into Bihar." 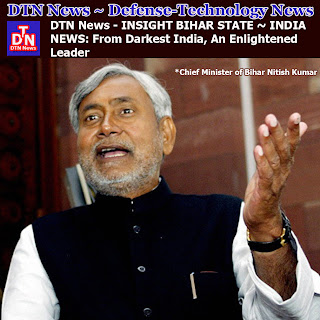 Bihar is no longer the butt of jokes, however, not since Nitish Kumar took charge of the ruined state in 2005 and began to turn it around -- winning such respect that he stands a decent chance of one day becoming prime minister of India.
"My first priority was governance, my second priority was governance and my third priority was governance," Chief Minister Kumar told Reuters at his office in the state capital, Patna, a dusty city where property prices have soared to levels paid in far away New Delhi, even as its streets teem with the desperately poor.
"Bihar suffered not because of bad governance but because of a lack of governance."
When India launched reforms to open up its state-stifled economy 20 years ago, many states surged ahead, leaving behind the 3.5 percent "Hindu rate of growth" that had plagued the decades after the country's independence from Britain in 1947, and with it Bihar.
Bihar is still India's most impoverished state: landlocked, not blessed with resources and prone to catastrophic flooding, its annual per-capita income of about $400 is just a third of the national average. Its 104 million overwhelmingly farm-dependent people have India's worst literacy rate and the lowest proportion of households with electricity, and the state scores miserably on the U.N.'s Human Development Index.
It's hard to imagine that in ancient times Bihar was the centre of the flourishing Magadha empires and the region where the Buddha lived and attained enlightenment.
And yet the state's dismally low income level has grown 250 percent since Kumar took the helm, more than double the national average. The growth of its economy has surged into double figures to become India's second-fastest growing state, driven by hefty public spending on roads and buildings and rapid expansion in services such as hotels and restaurants.
RESTORING FAITH
Kumar has done much more than bring growth. Working until midnight most days for the past six years, he has declared war on crime and corruption, introduced an act that gives citizens the right to efficient public services, launched a frenzy of road-building, empowered women and promoted education, offering a free bicycle to every girl that registers in a Grade 9 class.
"Everything had gone to the dogs," said Prakash Jha, one of Bihar's favorite sons, a Bollywood film-maker who has chronicled many of the state's ills, including the once-thriving industry of kidnapping businessmen.
"What Nitish Kumar has been able to do is restore faith in the society of Bihar. We had almost given up, but now you feel you can do things in Bihar," said Jha, who has put his money where his mouth is, spending $12 million on a shopping mall and cinema multiplex in Patna, the state's first. 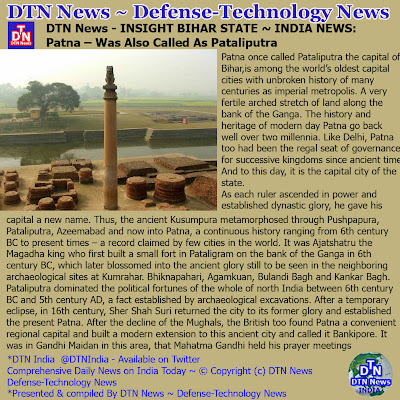