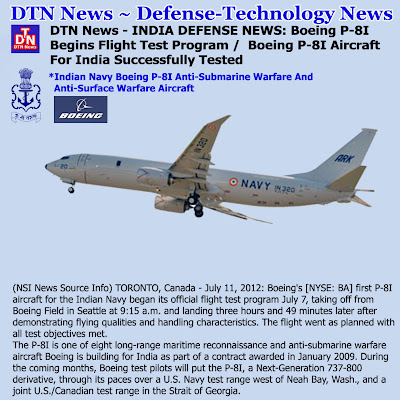 The P-8I is one of eight long-range maritime reconnaissance and anti-submarine warfare aircraft Boeing is building for India as part of a contract awarded in January 2009. During the coming months, Boeing test pilots will put the P-8I, a Next-Generation 737-800 derivative, through its paces over a U.S. Navy test range west of Neah Bay, Wash., and a joint U.S./Canadian test range in the Strait of Georgia.
"Today's flight is another on-time milestone for the program," said Leland Wight, Boeing P-8I program manager. "We'll start out testing the P-8I's mission system, which includes its sensors and communication systems. The team then will transition to 'stores' tests during which the P-8I will carry inert weapon shapes under its wings to demonstrate that the aircraft is capable of carrying all the weapons the Indian Navy will use during regular missions."
The stores the P-8I will carry will have the identical shape and size of real weapons, including the Harpoon anti-ship missile, depth bombs and torpedoes.
"This is an important milestone for the program and sets the stage for operational testing and weapons certification as we move closer to P-8I aircraft joining the Indian Navy," said Rear Adm. DM Sudan, assistant chief of Naval Staff (Air), Indian Navy.
P-8I flight and weapons testing follows on the heels of similar testing for the U.S. Navy's P-8A Poseidon. P-8I is a variant of the Poseidon.
In order to efficiently design and build the P-8I and the P-8A, the Boeing-led team is using a first-in-industry, in-line production process that draws on the company's Next-Generation 737 production system. Assembly is complete on the second P-8I aircraft and it will make its first flight in the coming weeks.
The P-8I features open system architecture, advanced sensor and display technologies, and a worldwide base of suppliers, parts and support equipment. P-8I aircraft are built by a Boeing-led industry team that includes CFM International, Northrop Grumman, Raytheon, Spirit AeroSystems, BAE Systems and GE Aviation.
The Boeing-led team is on track to deliver the first aircraft to the Indian Navy in 2013.
Boeing offers India a broad spectrum of defense, space and security solutions that are relevant to India's current and future military and humanitarian needs. Boeing India's corporate office is in New Delhi. For more information, visit www.boeing.co.in.
A unit of The Boeing Company, Boeing Defense, Space & Security is one of the world's largest defense, space and security businesses specializing in innovative and capabilities-driven customer solutions, and the world's largest and most versatile manufacturer of military aircraft. Headquartered in St. Louis, Boeing Defense, Space & Security is a $32 billion business with 61,000 employees worldwide. Follow us on Twitter: @BoeingDefense.
Contact:
Chick Ramey
Surveillance & Engagement Communications
Boeing Defense, Space & Security
Office: +1 253-657-5636
Mobile: +1 206-851-4147
charles.b.ramey@boeing.com
Amrita Dhindsa
India Communications
Boeing Defense, Space & Security
+91 96546-06067
amrita.dhindsa@boeing.com
*Link for This article compiled by Roger Smith from reliable sources Boeing*Speaking Image - Creation of DTN News ~ Defense Technology News *This article is being posted from Toronto, Canada By DTN News ~ Defense-Technology News Contact:dtnnews@ymail.com ©COPYRIGHT (C) DTN NEWS DEFENSE-TECHNOLOGY NEWS