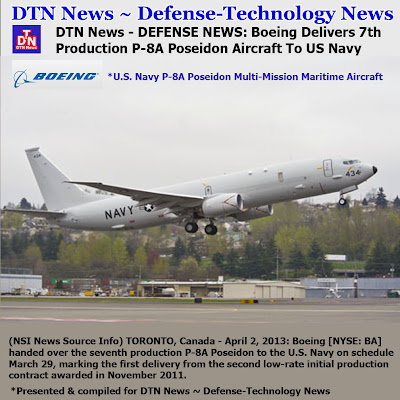 "This is our second P-8A delivery of 2013, and we'll continue to provide the Navy with new Poseidon aircraft at a rate of nearly one a month," said Rick Heerdt, Boeing vice president and P-8 program manager. "We've got a full factory of P-8As for the U.S. Navy and P-8I aircraft for India, and we're working side-by-side with both customers to introduce the aircraft's advanced capabilities into their fleets."

Boeing is on contract to build and support 24 P-8A aircraft as part of three LRIP contracts awarded in 2011 and 2012. The Navy plans to purchase 117 P-8As, which are based on the Next-Generation Boeing 737-800 platform. The versatile multi-mission aircraft provides broad long-range maritime patrol capabilities -- anti-submarine warfare, anti-surface warfare, intelligence, surveillance and reconnaissance -- and will replace the Navy P-3 fleet.

A derivative of the Next-Generation 737-800, the P-8A combines superior performance and reliability with an advanced mission system that ensures maximum interoperability in the future battle space.

Customers:
The P-8A is being developed for the U.S. Navy by a Boeing-led industry team that consists of CFM International, Northrop Grumman, Raytheon, GE Aviation, BAE Systems and Spirit AeroSystems.

On Jan. 1, 2009, Boeing signed a contract with the government of India to provide eight P-8I long-range maritime reconnaissance and anti-submarine warfare aircraft to the Indian navy. The P-8I is a derivative of the P-8A designed specifically for the Indian navy.

Australia signed an MOU with the U.S. Navy in 2009 and will collaborate in Increment 2. In March 2012, a production, sustainment and follow-on development MOU was signed.

Source: DTN News - - This article compiled by Roger Smith from reliable sources Chris Luo SCMP
(NSI News Source Info) TORONTO, Canada - April 2, 2013: China’s military on Monday confirmed two pilots had died in a military plane crash over the weekend – but only after pictures and a video appeared on the internet. 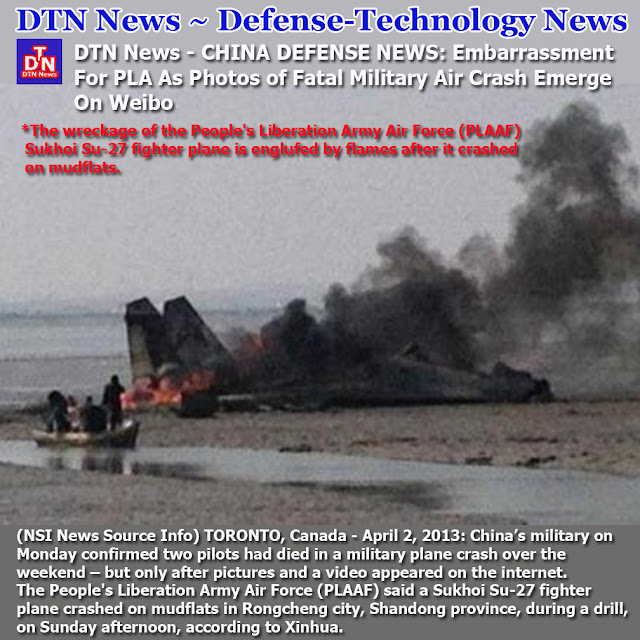 The People's Liberation Army Air Force (PLAAF) said a Sukhoi Su-27 fighter plane crashed on mudflats in Rongcheng city, Shandong province, during a drill, on Sunday afternoon, according to Xinhua.


Photographs and a video clip of the crash site were uploaded onto microblogging platform Sina Weibo on Sunday afternoon and quickly went viral.
One photograph showed the wreckage of the aircraft engulfed in flames and black smoke, while another showed fishermen trying to approach the crash site.
In a video clip circulated online, an onlooker said the plane "floated" in the air for a while before it crashed to the ground and caught fire.
According to Xinhua, the two pilots died in the accident. There were no reported casualties or damage to property among local residents.
The pilots had ejected from the plane before the crash but it was not known why they died, the Global Times reported.


The twin-engine, Russian-made, Soviet-era fighter aircraft was introduced to China's military in the 1990s. The PLAAF now has about 300 Su-27s in different versions.
The Su-27 fighters have given the Chinese air force "strong capabilities in both long-range air combat and dog-fights", the Global Times quoted a military expert as saying.
The last known crash of the same type of aircraft in China took place in early 2009 when a Su-27 crashed into a mountain in Chongqing after reportedly experiencing “a series of explosions”, according to a BBC report.
In 2002, a Ukrainian Su-27 fighter lost control during an aerial acrobatics show and crashed into an audience stand, killing 83.