India is planning to procure eight new South Korean minesweepers for its Navy to augment its fleet of warships capable of detonating sea mines. 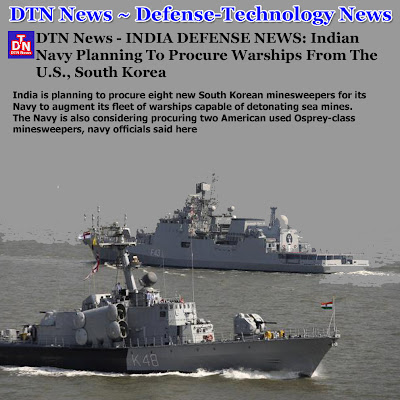 “Defence Ministry is holding commercial negotiations with the Kangnam Corporation of South Korea for procuring eight minesweepers of which two would be constructed at the vendors’ shipyards and the rest would be built in India,” they said.

At present, the Navy operates 12 minesweepers of the Pondicherry and Karwar class that are deployed in equal numbers along the Eastern and the Western sea board.

The warships were built in the 1970s and 1980s and the Navy is planning to replace them with the modern vessels.

The ministry had shortlisted two vendors including the Pusan-based Kangnam Corporation and Italian firm Intermarine but the Korean firm was chosen as it was the lowest bidder and met the technical and other requirements, they added.

The contract was to be signed with Kangnam earlier but it got delayed after the Italian firm went to the Central Vigilance Commission (CVC) against the decision.

But the issue has been resolved now and the contract negotiations are progressing well, officials said.

According to the tender, Kangnam will be required to build the first two warships, following which Goa Shipyard Limited will be commissioned to build the rest minesweepers at its facilities.

The first ship is likely to be delivered by 2016 and Goa Shipyard Limited will deliver the remaining ships by 2018.

In addition, the navy is also planning to induct two used Osprey-class minesweepers from the U.S. that were decommissioned by the U.S. Navy in 2007.

[edit]Ships under construction (36 ships being built)