Source: DTN News - - This article compiled by Roger Smith
(NSI News Source Info) TORONTO, Canada - March 1, 2013:  The classification of similar products - be it fighters, computer systems or naval frigates - in generations is a well established practice and is generally accepted as a quick shortcut to define the broad characteristics and time frames of a given product category. However, the inherent rigidities, inflexibilities and oversimplifications of such practices cannot be ignored, in the fighter aircraft sector, in particular.

As an example, the generation sequence and headings used by Lockheed Martin for fighters are generally shared by the defence community and can be summarised as follows:

A fifth-generation jet fighter is a fighter aircraft classification used in the United States and elsewhere encompassing the most advanced generation of fighter aircraft as of 2013. Fifth-generation aircraft are designed to incorporate numerous technological advances over the fourth generation jet fighter. The exact characteristics of fifth generation jet fighters are controversial and vague, with Lockheed Martin defining them as having all-aspect stealth even when armed, Low Probability of Intercept Radar (LPIR), high-performance air frames, advanced avionics features, and highly integrated computer systems capable of networking with other elements within the theatre of war for situational awareness. The only currently combat-ready fifth-generation fighter, the Lockheed Martin F-22 Raptor, entered service with the U.S. Air Force in 2005 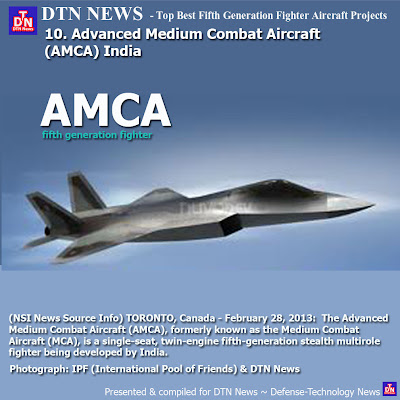 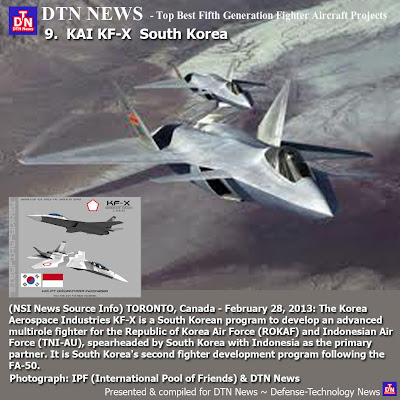 The Korea Aerospace Industries KF-X is a South Korean program to develop an advanced multirole fighter for the Republic of Korea Air Force (ROKAF) and Indonesian Air Force (TNI-AU), spearheaded by South Korea with Indonesia as the primary partner. It is South Korea's second fighter development program following the FA-50. 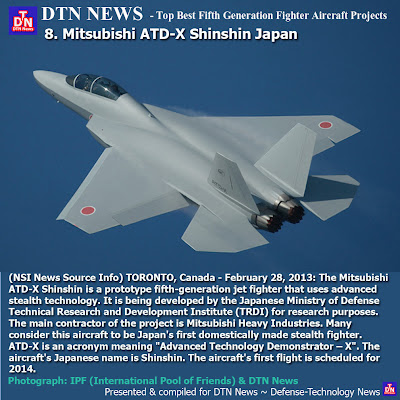 The Mitsubishi ATD-X Shinshin is a prototype fifth-generation jet fighter that uses advanced stealth technology. It is being developed by the Japanese Ministry of Defense Technical Research and Development Institute (TRDI) for research purposes. The main contractor of the project is Mitsubishi Heavy Industries. Many consider this aircraft to be Japan's first domestically made stealth fighter. ATD-X is an acronym meaning "Advanced Technology Demonstrator – X". The aircraft's Japanese name is Shinshin. The aircraft's first flight is scheduled for 2014. 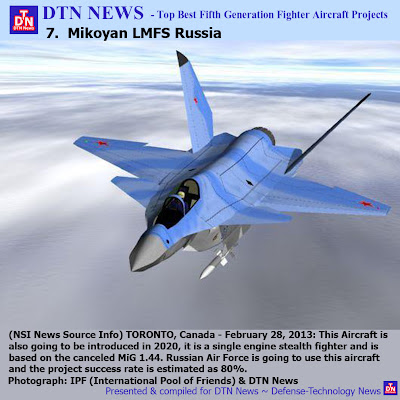 This Aircraft is also going to be introduced in 2020, it is a single engine stealth fighter and is based on the canceled MiG 1.44. Russian Air Force is going to use this aircraft and the project success rate is estimated as 80%. 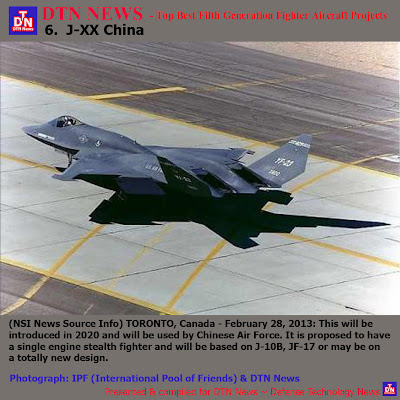 This will be introduced in 2020 and will be used by Chinese Air Force. It is proposed to have a single engine stealth fighter and will be based on J-10B, JF-17 or may be on a totally new design.

The Sukhoi/HAL Fifth Generati on Fighter Aircraft (FGFA) is a fifth-generation fighter being developed by India and Russia. It is a derivative project from the PAK FA (T-50 is the prototype) being developed for the Indian Air Force. FGFA was the earlier designation for the Indian version, while the combined project is now called the Perspective Multi-Role Fighter (PMF). 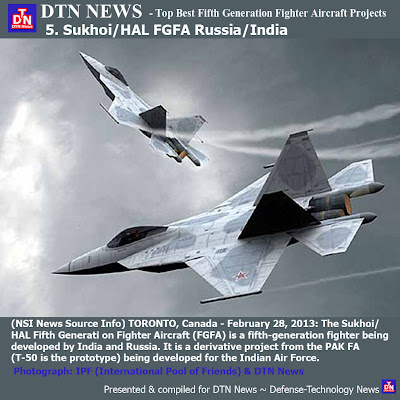 The completed PMF will include a total of 43 improvements over the T-50, including stealth, supercruise, advanced sensors, networking and combat avionics.

Two separate prototypes will be developed, one by Russia and a separate one by India. According to HAL chairman A.K. Baweja (speaking shortly after the India-Russia Inter-Governmental Committee meeting on 18 September 2008), both the Russian and Indian versions of the aircraft will be single-seater. The first aircraft will begin testing in India in 2014, with introduction into service expected by 2022.


The Lockheed Martin F-35 Lightning II is a family of single-seat, single-engine, fifth generation multirole fighters under development to perform ground attack, reconnaissance, and air defense missions with stealth capability. The F-35 has three main models; the F-35A is a conventional takeoff and landing variant, the F-35B is a short take off and vertical-landing variant, and the F-35C is a carrier-based variant. 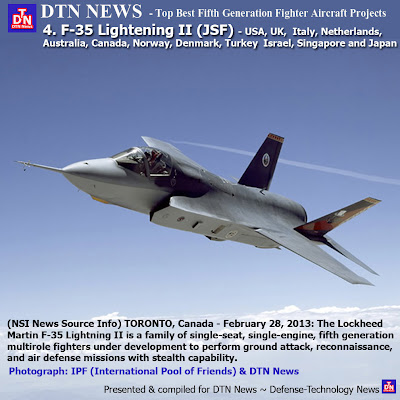 The F-35 is descended from the X-35, the product of the Joint Strike Fighter (JSF) program. JSF development is being principally funded by the United States. The partner nations are either NATO members or close U.S. allies. It is being designed and built by an aerospace industry team led by Lockheed Martin. The F-35 carried out its first flight on 15 December 2006.

The United States plans to buy a total of 2,443 aircraft to provide the bulk of its tactical airpower for the U.S. Air Force, Marine Corps and Navy over the coming decades. The United Kingdom, Italy, Netherlands, Australia, Canada, Norway, Denmark, and Turkey are part of the development program; Israel, Singapore and Japan may also equip their air services with the F-35. 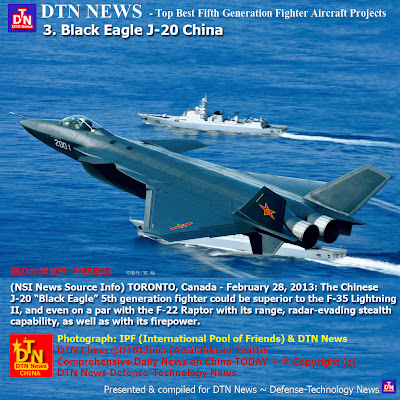 The Chinese J-20 “Black Eagle” 5th generation fighter could be superior to the F-35 Lightning II, and even on a par with the F-22 Raptor with its range, radar-evading stealth capability, as well as with its firepower.

The Sukhoi PAK FA is a twin-engine jet fighter being developed by Sukhoi for the Russian Air Force. The Sukhoi T-50 is the prototype for PAK FA. The PAK FA is one of only a handful of stealth jet programs globally. 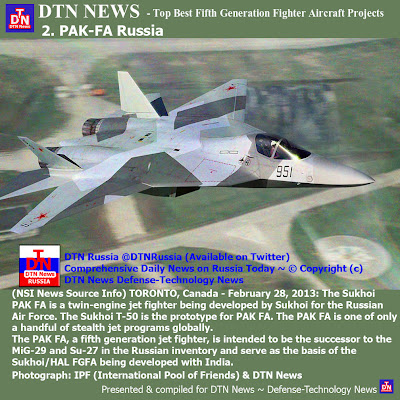 The PAK FA, a fifth generation jet fighter, is intended to be the successor to the MiG-29 and Su-27 in the Russian inventory and serve as the basis of the Sukhoi/HAL FGFA being developed with India. The T-50 prototype performed its first flight 29 January 2010. By 31 August 2010, it had made 17 flights and by mid-November, 40 in total. The second T-50 was to start its flight test by the end of 2010, but this was delayed until March 2011.

The Russian Defence Ministry will purchase the first 10 evaluation example aircraft after 2012 and then 60 production standard aircraft after 2016. The first batch of fighters will be delivered with current technology engines. The PAK-FA is expected to have a service life of about 30–35 years.

The Lockheed Martin/Boeing F-22 Raptor is a single-seat, twin-engine fifth-generation supermaneuverable fighter aircraft that uses stealth technology. It was designed primarily as an air superiority fighter, but has additional capabilities that include ground attack, electronic warfare, and signals intelligence roles. Lockheed Martin Aeronautics is the prime contractor and is responsible for the majority of the airframe, weapon systems and final assembly of the F-22. Program partner Boeing Defense, Space & Security provides the wings, aft fuselage, avionics integration, and training systems. 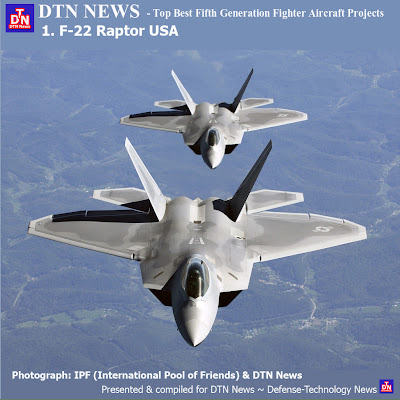 The aircraft was variously designated F-22 and F/A-22 during the years prior to formally entering USAF service in December 2005 as the F-22A. Despite a protracted and costly development period, the United States Air Force considers the F-22 a critical component of U.S. tactical air power, and claims that the aircraft is unmatched by any known or projected fighter. Lockheed Martin claims that the Raptor's combination of stealth, speed, agility, precision and situational awareness, combined with air-to-air and air-to-ground combat capabilities, makes it the best overall fighter in the world today. Air Chief Marshal Angus Houston, former Chief of the Australian Defence Force, said in 2004 that the "F-22 will be the most outstanding fighter plane ever built."

The high cost of the aircraft, a lack of clear air-to-air combat missions because of delays in the Russian and Chinese fifth-generation fighter programs, a U.S. ban on Raptor exports, and the ongoing development of the planned cheaper and more versatile F-35 resulted in calls to end F-22 production. In April 2009, the U.S. Department of Defense proposed to cease placing new orders, subject to Congressional approval, for a final procurement tally of 187 operational aircraft. The National Defense Authorization Act for Fiscal Year 2010 lacked funding for further F-22 production. The final F-22 rolled off the assembly line on 13 December 2011 during a ceremony at Dobbins Air Reserve Base.