Booz Allen Hamilton, Inc., Arlington, Va. (N65236-12-D-4800); ManTech SRS Technologies, Inc., Arlington, Va. (N65236-12-D-4801); Schafer Corp., Arlington, Va. (N65336-12-D-4802); and System Planning Corp., Arlington, Va. (N65236-12-D-4803), are each being awarded an indefinite-delivery/indefinite-quantity, cost-plus-fixed-fee, multiple award contract for advance technical engineering services to support Defense Advance Research Project Agency/Tactical Technology Office programs and initiatives. Each contractor will be awarded $6,250 at the time of award. These contracts include options, which, if exercised, would bring the cumulative value of these contracts to a combined estimated $150,000,000. Work will be performed in Arlington, Va. (95 percent), and Charleston, S.C. (5 percent), and is expected to be completed by October 2012. If all options are exercised, work could continue until October 2014. Contract funds will not expire at the end of the current fiscal year. The multiple award contracts were competitively procured by full and open competition via the Space and Naval Warfare Systems Center e-Commerce Central website and the Federal Business Opportunities website, with four offers received. Space and Naval Warfare Systems Center Atlantic, Charleston, S.C., is the contracting activity.

BAE Systems, U.S. Combat Systems, Minneapolis, Minn., is being awarded a $73,000,000 fixed-price incentive-fee firm target undefinitized contract action for the Advanced Gun System (AGS) for DDG 1002. The AGS is a 155mm, vertically loaded, stabilized gun mount that is capable of storing, programming, and firing the Long Range Land Attack Projectile. It is a fully automated weapon system capable of firing 10 rounds per minute supplied via a fully automated magazine loading system. The gun’s primary mission is land attack. The Zumwalt-class destroyer will employ two AGS gun mounts and magazines in support of ground expeditionary forces. This contract includes options, which, if exercised, would bring the cumulative value of this contract to $168,000,000. Work will be performed in Louisville, Ky. (40 percent), Minneapolis, Minn. (30 percent), and Cordova, Ala. (30 percent), and is expected to be completed by January 2018. Contract funds will not expire at the end of the current fiscal year. This contract was not competitively procured. The Naval Sea Systems Command, Washington D.C, is the contracting activity (N00024-12-C-5311).

Huntington Ingalls Industries, Newport News Shipbuilding, Newport News, Va., is being awarded a $16,884,918 modification, which exercises priced research, development, test and evaluation options under previously awarded contract (N00024-09-C-2116) for continuation of construction preparation efforts for the future USS John F. Kennedy (CVN 79). Huntington Ingalls Industries will provide all services and material in preparation for construction which will include necessary research studies; engineering; design; related development efforts; advanced planning; advanced procurement for detailed design and procurement of long lead material; advance construction; life cycle support; logistics data; and other data to support the anticipated ship detail design and construction of CVN 79. Work will be performed in Newport News, Va., and is expected to be completed by October 2012. Contract funds in the amount of $16,884,918 will expire at the end of the current fiscal year. The Naval Sea Systems Command, Washington Navy Yard, Washington, D.C., is the contracting activity. 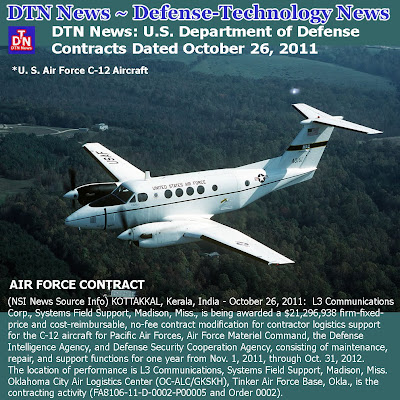 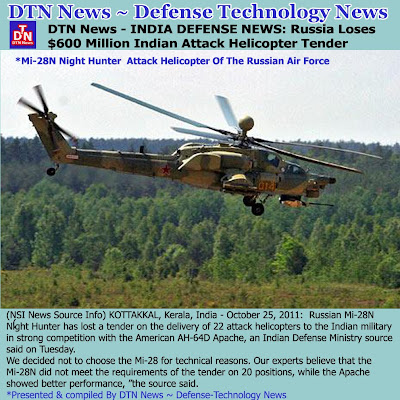 “We decided not to choose the Mi-28 for technical reasons. Our experts believe that the Mi-28N did not meet the requirements of the tender on 20 positions, while the Apache showed better performance,” the source said.
The future contract, worth at least $600 million, envisions an optional delivery of additional 22 helicopters.
Russia is still taking part in two other Indian helicopter tenders: on the delivery of 12 heavy transport helicopters and 197 light general-purpose helicopters.
Mi-28 Combat Helicopters:
The Mi-28 combat helicopter has been developed by Mil Moscow Helicopter Plant and is known by the NATO codename Havoc. In August 1996 Mil rolled out a prototype of the day and night capable version, the Mi-28N Night Havoc. The first production Mi-28N took its first flight in April 2004 and began flight testing with the Russian Air Force in June 2005.
The Russian Air Force has plans to procure up to 60 of this variant, now called the Mi-28NE Night Hunter.
Three were ordered in 2005 and 16 more in 2006 for delivery by 2008. The first production aircraft was delivered in May 2006 and began formal acceptance testing in September 2006. Five aircraft are involved in the testing which is scheduled to conclude in early 2008.
Mi-28 can fly at a maximum speed of 300km/h, can fly rearwards and sideways at speeds up to 100km/h and is able to hover turn at 45° a second.