CONTRACTS
DEFENSE LOGISTICS AGENCY
The Boeing Co., Saint Louis, Mo., was awarded a firm-fixed-price, long-term, sole-source contract with a maximum $30,050,000 for F/A-18 inner wing assemblies.  There are no other locations of performance.  Using service is Navy.  Type of appropriation is fiscal 2012 Navy Working Capital Funds.  The date of performance completion is February 2014.  The Defense Logistics Agency Aviation, Philadelphia, Pa., is the contracting activity (SP0400-03-D-9408 TH04).

Oshkosh Corp., Oshkosh, Wis., was awarded a firm-fixed-price, requirements-type contract with a maximum $9,173,977 for wheel and tire assemblies.  There are no other locations of performance.  Using service is Defense Logistics Agency.  Type of appropriation is fiscal 2012 through fiscal 2014 Army Working Capital Funds.  The date of performance completion is Feb. 21, 2015.  The Defense Logistics Agency Land and Maritime, Warren, Mich., is the contracting activity (SPRDL1-12-D-0022).

Sikorsky Aircraft Corp., Stratford, Conn., is being awarded a $20,521,388 modification to a previously awarded indefinite-delivery/indefinite-quantity contract (N00019-07-D-0004) for special progressive aircraft rework of two VH-3D and one VH-60N executive helicopters, including vendor repairables and component overhaul.  Funds will be obligated on individual delivery orders as they are issued.  Work will be performed in Stratford, Conn., and is expected to be completed in September 2012.  Contract funds will not expire at the end of the current fiscal year.  The Naval Air Systems Command, Patuxent River, Md., is the contracting activity.

AIR FORCE
Northrop Grumman Space Technology, Clearfield, Utah, is being awarded a $13,557,000 cost-plus-award-fee contract to procure sustainment for the Minute Man Missile System incremental funding for exercised option.  The location of the performances is Clearfield, Utah.  Work is expected to be completed by Sept. 30, 2012.  AFNWC/PKME, Hill Air Force Base, Utah, is the contracting activity (F42610-98-C-0001).

ITT Systems Corp., Cape Canaveral, Fla., is being awarded a $8,502,772 cost-plus-award-fee and cost reimbursable contract for Space Lift Range System contract support for increased interim supply support spares to support the eastern and western ranges in case of equipment malfunction or failure.  The location of the performances is Patrick Air Force Base, Fla., and Vandenberg Air Force Base, Calif.  Work is expected to be completed by Oct. 31, 2012.  Space and Missile Systems Center, Peterson Air Force Base, Colo., is the contracting activity (F04701-01-C-0001 P00808). 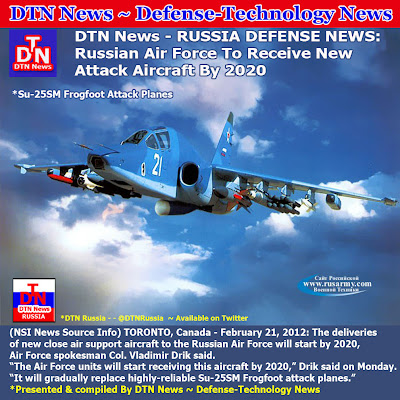 According to Drik, the new aircraft will meet the demands of modern warfare and feature elements of “stealth” technology, the whole range of tactical weaponry, modern radar and navigation equipment.Meanwhile, Russia will continue to upgrade its outdated Su-25 attack aircraft to Su-25SM version, which has a significantly better survivability and combat effectiveness.The Russian Air Force currently has over 30 Su-25SM planes in service and plans to modernize about 80 Su-25s by 2020, Drik said.The Su-25SM is the designation used for upgraded standard production Su-25 single-seat aircraft, and Su-25UBM the designation for a similar upgrade for the Su-25UB. The upgrade is carried out by the 121 ARZ plant at Kubinka Air Base. In 2001, the first Su-25SM was completed followed by a second aircraft in 2003. The test programme was completed in 2005, and the 121 ARZ started series upgrade of the Russian Air Force Su-25 fleet. The first six aircraft were completed in 2006 and handed over to the Russian Air Force on December 28, 2006. They received new serials; side number 01 thru 06. Six more Su-25SMs are scheduled for delivery in 2007, and eight for 2008. Two attack regiments will convert to the Su-25SM, starting with the 368th Attack Aircraft Regiment at Budyonnovsk.Main element of the Su-25SM upgrade is the new PrNK-25SM nav/attack system with satnav receiver, colour multi-purpose LCD, and SUO-39 fire control system. The upgrade is claimed to offer two to three times greater accuracy in weapons delivery and up to ten times in navigation accuracy. The upgrade also replaced the obsolete RWR with the L-150 electronic intelligence station and enables the use of R-73 advanced IR guided air-to-air missiles and KAB-500Kr TV-guided bombs.
Work on the upgrade of the first Su-25UB two-seat combat trainer to Su-25UBM standard in a similar upgrade started in May 2005 according to AFM, but recently it is reported it is planned for 2007.The Su-25KM 'Skorpion' is a Su-25K upgrade offered by the collaboration between Elbit Systems and Georgia's TAM (Tbilisi Aerospace Manufacturing). Improvements include Multi Function Color Displays, new HUD, Elbit Mission Computer, and an optional Helmet Mounted Display. On 27 October 2004, the first Su-25KM Skorpion was delivered to the Turkmenistan Air Force. This makes the Turkmenistan Air Force the first customer for the new variant. Georgia had already overhauled 43 standard Su-25s for Turkmenistan as a part payment for Georgian debts for the supply of gas, which is also believed to be the payment for the Su-25KM delivery.*DTN Russia - - @DTNRussia  ~ Available on Twitter