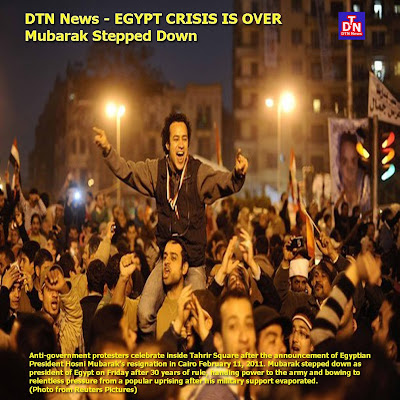 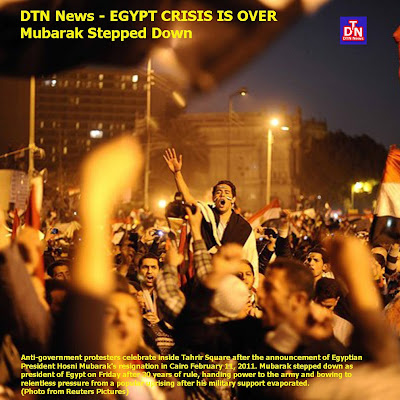 Anti-government protesters celebrate inside Tahrir Square after the announcement of Egyptian President Hosni Mubarak's resignation in Cairo February 11, 2011. Mubarak stepped down as president of Egypt on Friday after 30 years of rule, handing power to the army and bowing to relentless pressure from a popular uprising after his military support evaporated.
Peaceful and unarmed pro-democracy protesters who had shed blood to occupy central Cairo’s Tahrir Square less than a week before, fled from armed assailants on horse and camelback. They huddled behind makeshift barricades under a hail of rocks and Molotov cocktails thrown by loyalists of longtime president Hosni Mubarak.

From a distance, the embattled protesters looked like medieval villagers, outnumbered, outgunned and besieged by an angry horde.

Twelve hours later, almost impossibly, they emerged victorious. Through a smoke screen billowed from the rear of a speeding tank, and with high-calibre automatic gunfire ringing out in Cairo’s darkened streets, the Mubarak supporters fled into the night.

From then on, Tahrir (liberation) Square’s protesters have held their ground, and on Friday, the 18th day of nationwide demonstrations demanding the complete ouster of Mubarak’s regime, they won again.
*This article is being posted from Toronto, Canada By DTN News ~ Defense-Technology News, contact: dtnnews@ymail.com

The aircraft is the first of six C-130Js ordered under a U.S. Foreign Military Sale in late 2008. Senior representatives from the Indian and U.S. governments and air forces were present for the historic event.

“The Indian Air Force is happy to induct the C-130J Super Hercules, the most potent and versatile aircraft in its class,” said Air Chief Marshal P.V. Naik, IAF Chief of Air Staff. “It is an important milestone in transformation of the IAF that is presently underway. The IAF will fly an American aircraft after a gap of more than two decades after the Super Connie, and it is a historic moment for both countries.” The last U.S. aircraft flown by the IAF was a Lockheed Super Constellation, a type retired from the country’s fleet more than two decades ago.

This is India’s first experience with the C-130 so the package being provided by the U.S. government is comprehensive. The contact includes six aircraft, training of aircrew and maintenance technicians, spares, ground support and test equipment, servicing carts, forklifts, loading vehicles, cargo pallets and a team of technical specialists who will be based in India during a three-year initial support period. Also included in the package is India-unique operational equipment designed to increase Special Operations capabilities. The remaining five aircraft will be delivered later this year.

The C-130J is ideally suited to India’s mission environment, which often involves operating out of austere, high elevation airstrips in hot conditions. The C-130J is powered by four Rolls Royce AE2100 engines and Dowty six-bladed props that provide the aircraft with significant power. The C-130J has been operated for the past several years in the mountainous areas of Afghanistan in conditions similar to India and performed exceptionally well.