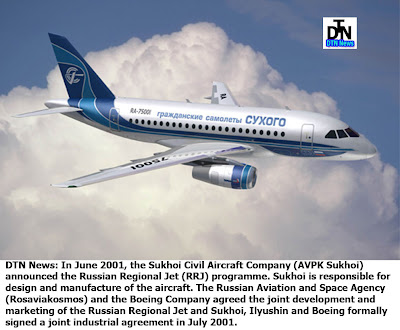 Russian manufacturer Sukhoi's long-waited Superjet 100 made its maiden flight in May 2008, missing an initial 2007 deadline, and the first deliveries of the regional jet are more than a year behind schedule.

The international engine certification process has been the main stumbling block for a plane piched by officials as a new hope for languishing Russian manufacturers eclipsed even at home by Western rivals.

"The certification is practically over," Putin said at the plant where Russia's Saturn makes the SaM 146 engines with French aerospace group Safran. (SAF.PA)

He said Saturn must guarantee production of 140 engines per year by 2014, a number that suggests Sukhoi plans to produce 70 of the jets that year.

Sukhoi management said that provided the certification comes this month, deliveries of the Superjet 100, designed to carry between 75 and 95 passengers, may start this year. The initial deadline was the end of 2008.

Sukhoi, best known for its fighter jets, is owned by Russia's state-controlled United Aviation Corporation (UAC) (UNAC.RTS). It is developing the Superjet 100 in partnership with Italy's Finmeccanica SpA. (SIFI.MI)

About 100 of the planes have been ordered and Russian flag carrier Aeroflot (AFLT.MM) tops the list of future buyers.

Putin, who held a government meeting at the Saturn plant, said the project was a priority and promised to take Saturn's financing needs into account when drafting Russia's 2011 budget.

He said Saturn, part of conglomerate Russian Technologies, will receive some state funding this year.

Russia is eager to breathe new life into its manufacturing and technology sectors as part of a drive to reduce dependence on natural resources. (Writing by Steve Gutterman, editing by Leslie Gevirtz)

Source: DTN News / AFP
(NSI News Source Info) TEHRAN, Iran - June 19, 2010: Iran accused the United States of "deception" on Saturday and insisted its missiles are for self-defence only after a top US official charged that the Islamic republic could rain missiles down on Europe.

"The Islamic Republic's missile capability has been designed and implemented to defend against any military aggression and it does not threaten any nation," Defence Minister Ahmad Vahidi said in a statement carried by state media.

He was reacting to remarks by US Defence Secretary Robert Gates on Thursday that US intelligence has shown that Iran could attack Europe with "scores or hundreds" of missiles, prompting major changes to US missile defences.

Washington seeks to "expand its domination over Europe, and to find an excuse not to dismantle its nuclear weapons stationed in the region, while putting the pressure on Russia and surrounding it," Vahidi said.

"The US seeks to create regional discord and impair (Moscow's) regional ties to humiliate Russia and weaken its relations with neighbouring countries," he added, urging Russia not to fall for "US deception and psychological war."

US President Barack Obama in September cited a mounting danger from Iran's arsenal of short- and medium-range missiles when he announced an overhaul of American missile defence plans.

The new programme uses sea- and land-based interceptors to protect NATO allies in the region, instead of mainly larger weapons designed to counter long-range missiles.

Gates said the United States believed "that if Iran were actually to launch a missile attack on Europe... it would more likely be a salvo kind of attack, where you would be dealing potentially with scores or even hundreds of missiles."

Iran is under mounting international pressure over its controversial nuclear programme of uranium enrichment which the West fears masks a covert weapons drive.

The Islamic republic vehemently denies the charge, but has been flexing its military muscle mainly in the strategic Gulf region by staging regular war games and showcasing an array of Iran-manufactured missiles.

The United States and its top regional ally Israel, the sole if undeclared nuclear-armed power in the Middle East, have never ruled out a military strike to curb Iran's atomic drive.

Iran has vowed to deliver a crushing response if it comes under attack.

It has developed more than a dozen short- and medium-range (up to 2,000 kilometres, 1,240 miles) missiles and continues to expand its ballistic missile capability, even launching satellite carriers into space despite UN sanctions.

The International Institute for Strategic Studies (IISS) has estimated that Tehran will have the capability to fire missiles at western Europe by 2014, but that it will need at least a decade to be able to target the United States.

Despite close economic and energy ties with Iran, Russia supported the latest round of sanctions against Iran on June 9 and froze a deal to sell S-300 anti-missile systems to Tehran.

By Steve Weizman
(NSI News Source Info) JERUSALEM, Israel - June 19, 2010: Israel's UN envoy has told the world body that the Jewish state is entitled to use "all necessary force" to 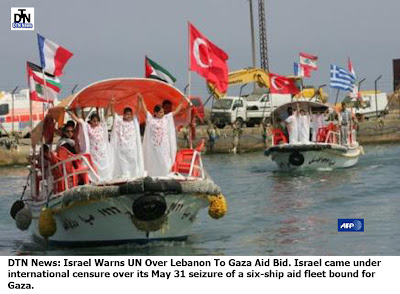 prevent activists sailing from Lebanon to Gaza, Israeli media reported on Saturday. In a letter to Secretary General Ban Ki-moon reported by radio stations and Internet news sites, Ambassador Gabriella Shalev was quoted as saying that Israel suspects that organisers may be linked to Lebanon's Hezbollah. "Israel reserves its right under international law to use all necessary means to prevent these ships from violating the existing naval blockade imposed on the Gaza Strip," the website of newspaper Haaretz quoted her as writing. "It appears that a small number of ships plan to depart from Lebanon and sail to the Gaza Strip which is under the control of the Hamas terrorist regime," she added. "While those who organise this action claim that they wish to break the blockade on Gaza and to bring humanitarian assistance to the people of Gaza, the true nature of the actions remains dubious." A group of dozens of Lebanese women activists is planning to set sail for Gaza on a ship loaded with medical supplies in a new bid to break Israel's four-year blockade of the Palestinian territory. Hezbollah on Friday denied it was backing an all-women aid flotilla planning to sail from Lebanon to Gaza, saying that it did not want to give Israel a pretext to attack the activists. Israel came under international censure over its May 31 seizure of a six-ship aid fleet bound for Gaza, in which nine Turkish activists were shot dead by naval commandos in clashes on the lead boat. Defence Minister Ehud Barak on Thursday warned Lebanon that it would be responsible for any "violent and dangerous confrontation" with any vessel sailing to Gaza from its shores. Last year, a Lebanese freighter which tried to deliver aid to Gaza was intercepted by Israeli warships.