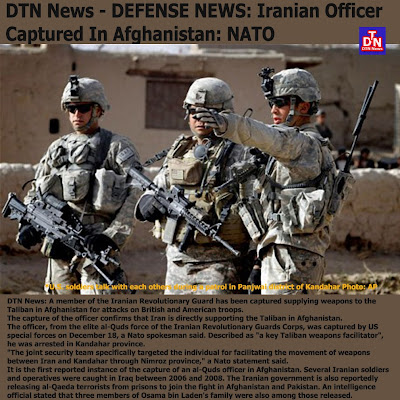 He was targeted "for facilitating the movement of weapons between Iran and Kandahar through Nimroz province," a spokesman for the NATO-led International Security Assistance Force (ISAF) said.
It is thought he was connected to smuggling small arms between the countries.
"The now-detained man was considered a Kandahar-based weapons facilitator with direct ties to other Taliban leaders in the province," the ISAF spokesman added in a statement.
The news again spotlights the complex relationship between Afghanistan, Iran and the United States, whose troops make up roughly two-thirds of the coalition force.
Kabul has insisted that Iran, as a neighbouring country, has a legitimate concern in helping the reconstruction and development of Afghanistan.
But some in Iran's arch foe the US are concerned that Tehran could be funding insurgents or trying to play on anti-Western sentiment in Karzai's government.
British newspaper The Times reported Friday that Iran has released a string of senior Al-Qaeda militants from custody so they can help the network rebuild in the Afghanistan-Pakistan border areas.
The newspaper quoted anonymous Pakistani and Middle Eastern officials accusing Iran of giving covert support to the Islamist militants, often through the Revolutionary Guards.
Earlier this year, it emerged that President Hamid Karzai's government was receiving bags of cash from Iran, prompting the US to voice concern about its potential "negative influence."
Whistleblowing website WikiLeaks released leaked US military intelligence documents earlier this year suggesting Iran was waging a covert campaign against coalition forces by providing money, arms and a safe haven to Taliban insurgents.
Afghanistan's deputy commerce minister Mohammad Sharif Sharifi said this week that Iran was preventing 1,600 fuel tankers from crossing into Afghanistan because Tehran believed they would supply foreign troops.
Southern Afghanistan -- particularly the provinces of Helmand and Kandahar, where the Iranian was captured -- is seen as the Taliban's home turf and is at the heart of the war in Afghanistan between international forces and the Islamist militants.
Six NATO soldiers and two Afghan troops died in a car bombing earlier this month in Zhari district.
The United States last year said it was sending 30,000 extra troops to Afghanistan, raising its numbers there to 90,000 and the overall international presence to 140,000.
It is likely to start a limited withdrawal of troops from July 2011, with Afghan troops and police due to take over responsibility for their country's security in 2014.
*This article is being posted from Toronto, Canada By DTN News ~ Defense-Technology News, contact: dtnnews@ymail.com
Related News;

Reuters Canada - Michelle Nichols, Paul Tait - ‎32 minutes ago‎
KABUL (Reuters) - A man believed to be a member of Iran's Revolutionary Guard has been captured in southern Afghanistan and accused of smuggling weapons to ...

Channel News Asia - ‎7 hours ago‎
LONDON: Iran has released a string of top Al-Qaeda militants from detention so they can rebuild the extremist organisation on the Afghanistan-Pakistan ...

Telegraph.co.uk - Barney Henderson - ‎8 hours ago‎
A member of the Iranian Revolutionary Guard has been captured supplying weapons to the Taliban in Afghanistan for attacks on British and American troops. ...

THE YEAR IN REVIEW: AFGHANISTAN

Independent - Kim Sengupta - ‎8 hours ago‎
AP In Afghanistan, 2009 ended with a major military offensive against the Taliban in Helmand. As 2010 draws to a close, another massive Nato ...

Wall Street Journal - Matthew Kaminski - ‎9 hours ago‎
By carefully reforming local government, the US may entice mid-ranking Taliban to put down their arms. By MATTHEW KAMINSKI Nine months after US Marines ...

CNN (blog) - ‎11 hours ago‎
NATO's command in Afghanistan is investigating a military operation in a northern province that it says led to the "inadvertent" deaths of two people. ...

Winnipeg Free Press - Mike Blanchfield - ‎16 hours ago‎
OTTAWA - The political ground beneath the Harper government's feet is set to shift in 2011 when Canada's military boots on the ground end their combat ...

CTV.ca - ‎16 hours ago‎
Hundreds of Canadian, American and Afghan troops pushed deep into Taliban country this week as part of an operation to rout the insurgents from an area in ...

Sify - ‎21 hours ago‎
Afghan Taliban commanders have reportedly fled Kandahar because of the US military attacks against the insurgent group in the region that was once ...

A NEW MODEL FOR AFGHANISTAN

Ottawa Citizen - ‎Dec 22, 2010‎
Once again, the practice of training and equipping foreign armies in unstable conflict zones is coming to the fore as our solution to conflict in ...

CBC.ca - ‎Dec 22, 2010‎
Defence Minister Peter MacKay is calling on the Afghan government to "pick up the slack" as the Canadian military hammers out the details and logistics of ...

Radio Australia News - ‎2 hours ago‎
NATO says a member of the elite al-Quds force of Iran's Revolutionary Guard has been captured in Afghanistan. International forces say the soldier has been ...

FROM KANDAHAR TO KABUL

Brantford Expositor - Kathleen Harris - ‎21 hours ago‎
The year 2011 will be one of massive transition for Canadian Forces in Afghanistan, as troops close out the mission as combat warriors in ...

LONGER WAR IN AFGHANISTAN IS A PERSONAL AFFRONT 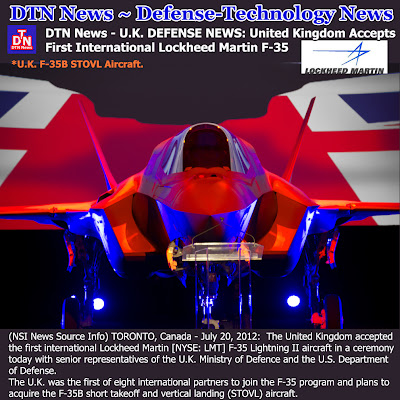 The Right Honourable Philip Hammond, U.K. Secretary of State for Defence, and Mr. Frank Kendall, U.S. Undersecretary of Defense for Acquisition, Technology and Logistics, represented their governments.“We are here to celebrate an important ‘first’ among so many milestones associated with the F-35 program,” said Bob Stevens, Lockheed Martin chairman and chief executive officer. “It’s fitting that our first delivery to an international partner is to the United Kingdom, because without sustained British innovation over many generations, we would not have an event to celebrate today.”The U.K. was the first of eight international partners to join the F-35 program and plans to acquire the F-35B short takeoff and vertical landing (STOVL) aircraft. Lockheed Martin is developing the F-35 with its principal industrial partners, Northrop Grumman and BAE Systems. Headquartered in the U.K., BAE Systems brings a rich heritage of capabilities to the F-35 program, including short takeoff and vertical landing experience, advanced lean manufacturing, flight testing and air systems sustainment, and is responsible for the F-35’s aft fuselage, fuel system, crew escape and life support systems. The U.K. will play a vital role in the F-35’s global production, follow-on development and sustainment over the next 40 years, bringing strong economic benefits to the country.The F-35 Lightning II is a 5th Generation fighter, combining advanced stealth with fighter speed and agility, fully fused sensor information, network-enabled operations and advanced sustainment. Three distinct variants of the F-35 will replace the A-10 and F-16 for the U.S. Air Force, the F/A-18 for the U.S. Navy, the F/A-18 and AV8-B Harrier for the U.S. Marine Corps, and a variety of fighters for at least 10 other countries.
Headquartered in Bethesda, Md., Lockheed Martin is a global security and aerospace company that employs about 120,000 people worldwide and is principally engaged in the research, design, development, manufacture, integration and sustainment of advanced technology systems, products and services. The corporation's net sales for 2011 were $46.5 billion.*F-35B  Related Images; 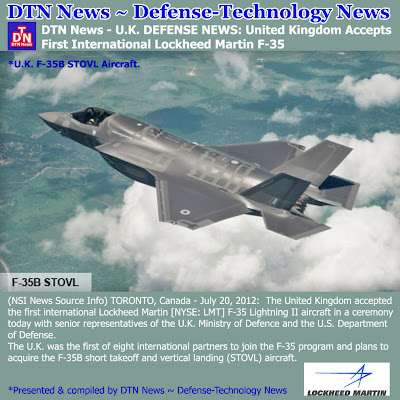 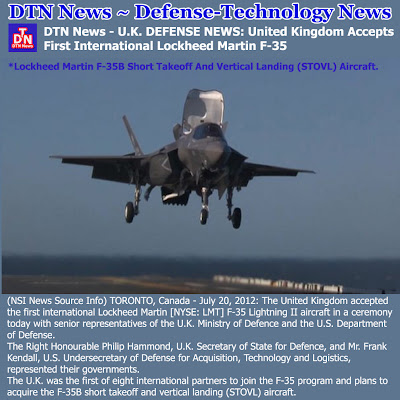