China has become known as the epicenter for producing a wide variety of counterfeit and bootlegged consumer products, but a trend has emerged over the past few years of faking full retail operations. 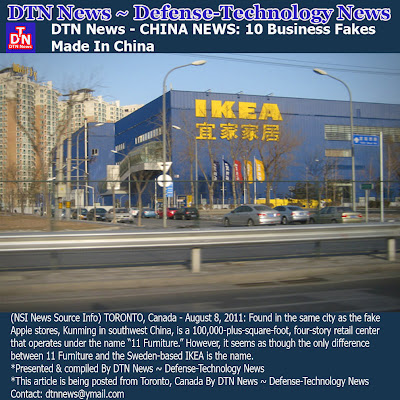 A relatively new phenomenon, these rogue counterfeit businesses are a problem for companies that are trying to establish a brand image in China's emerging economy. While some of these operations sell actual products from the legitimate companies, many simply copy the retail format, right down to even the colors and slogans. Other forms of this type of counterfeiting have followed in the wake of major consumer trends, where illegally copying products, brands, or intellectual property of successful companies has turned into big business in China.

So, what are some examples of retail operations and major brands that have been copied in China?

Recently, the discovery of illegitimate Apple stores in several Chinese cities sparked controversy both in China and the U.S. The fake Apple store, which was uncovered by the Bird Abroad blog , had similar signage, layout and even salespeople as real Apple stores. However, BirdAbroad picked out several key details not common among true Apple stores and correctly pointed out the stores as fake. The stores claimed to have real Apple products, but were not licensed or operated by the company.

Quickly following the public uproar—which included angry customers storming the stores in question demanding refunds—several of the stores were closed, not for their fraudulent use of the Apple brand, but for the lack of proper business licenses.

Although fake stores are relatively widespread in China, more elaborate, but equally illegitimate theme parks have also been built. One of the most glaring examples is the Beijing Shijingshan Amusement Park, which is run by the Shijingshan district government. The park includes structures that closely resemble Walt Disney 's iconic Magic Kingdom and Epcot center, while mascots strikingly similar to trademarked characters such as Shrek, Snow White, The Seven Dwarfs, Mickey Mouse, and Goofy can be seen around the park. Some of the characters were even spotted outside the Bird's Nest Pavilion during the 2008 Beijing Olympics.

Although the park caught the attention of Disney in 2007, it remains in operation today and even maintains an English version of its website.

Found in the same city as the fake Apple stores, Kunming in southwest China, is a 100,000-plus-square-foot, four-story retail center that operates under the name "11 Furniture." However, it seems as though the only difference between 11 Furniture and the Sweden-based IKEA is the name.

According to reports by Reuters, the store copies Ikea's blue and yellow color scheme, mock-up rooms, miniature pencils, signage, and even rocking chair designs. Although the name of the store in English is not the same, in Chinese, 11 Furniture is "Shi Yi Jia Ju," which is quite similar to IKEA, which is "Yi Jia Jia Ju." 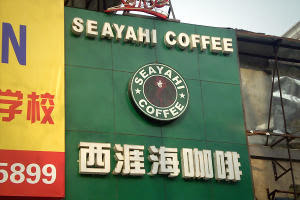 If it works in the West, it's a sign that China copy-cat stores may not be far behind. In 2006, Starbucks was successful in an intellectual property case against a Chinese company that operated under the name Xingbake, which is Chinese for Starbucks.

There have been numerous reports of fake Starbucks in China, including One Dollar Coffee, Seayahi Cofee, Lucky Coffee, Bucksstar Coffee and more. Bucksstar Coffee in particular was part of a mall that featured several fake storefronts, including a store called "Pizza Huh" and "McDnoalds," with similar color schemes and signage as the western originals, according to the U.K.'s Mirror .

If the Disney theme park wasn't enough, an equally brazen Chinese entrepreneur decided to build a theme park based upon the popular World of Warcraft and Starcraft brands, owned by Blizzard Entertainment.

The theme park is called World Joyland and is located in the Changzhou, west of Shanghai. The theme park was an attempt to merge the park and video game experience, and claims to have cost $30 million to build. However, the "Terrain of Magic" and "Universe of Starship" offerings are eerily similar to Blizzard's brands, points out the blog Shanghaiist. 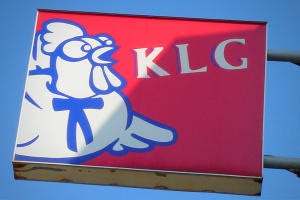 Although the real Kentucky Fried Chicken can be blamed in its own right for fakery in China—as evidenced by it's use of an Obama imposter in several Chinese TV ads —the company is also a victim of storefront forgeries. The fake KFC stores not only use the fast-food chain's branding, but also replace Colonel Sanders with their own rendition .

The fake KFCs may not remain around for long, however, since KFC recently became the largest restaurant company in mainland China, after becoming one of the fastest-growing brands in the country, according to a Harvard Business School study.

Although China has notoriously been a haven for businesses copying American brands and merchandise, the same has happened for Harry Potter books in China's domestic market, reports The New York Times . The Chinese market has been plagued by Harry Potter fakes that come in many forms.

One type of forgery utilized the same title as an upcoming Potter book and peddlers began selling it several days prior to the official book's release date. Other forgeries have used the text from J.R.R. Tolkien's "The Hobbit," swapping out the original character names with those from the Harry Potter universe and re-titling it "Harry Potter and the Leopard Walk-Up-To Dragon." Unlicensed translations and reproductions, of both Harry Potter and other popular books, are also rampant in China. 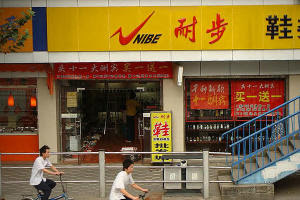 Another popular brand in China is Nike , and along with that popularity comes knock-off stores, such as this one, pictured left. Nike has been manufacturing in the region for decades and China also remains a major source of counterfeit Nike products.

McDonald's is another global brand with a strong and growing presence in China, but not even McDonald's can escape imitation stores. Although the image to the left shows a real McDonalds restaurant, there have been several imitations that mimic a variety of McDonald's looks and logos. Most copy the look and feel of the restaurant, but others have copied the menus and even some of its slogans. Several imitations that can be found are "Mini Dog" and "Mcdnoalds," which both use the distinctive golden arches.

Although the store has been confirmed by Disney to be legitimate, Reuters reports that even this non-fake business has components that are fake. The store, which is also located in Kunming, sells a variety of Disney products, but also has poorly made Angry Birds toys, Reuters reports.

NATO tried to determine on Sunday if Taliban insurgents had shot down a troop-carrying helicopter in Afghanistan, killing 38 in the largest loss of life suffered by foreign forces in a single incident in 10 years of war.

In a bloody two days for foreign forces, another four NATO troops were killed in two separate attacks on Sunday by insurgents in the country's violent east and south, the coalition said. 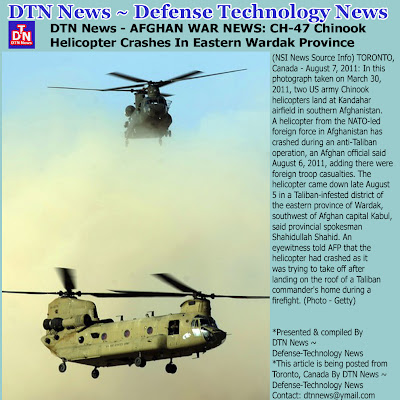 The majority of foreign troops serving in those regions are American, although some French troops are also based in volatile Kapisa province in the east.

The French president's office in Paris said two French soldiers were killed and five wounded when they were attacked by insurgents in Kapisa's remote Tagab valley. There was no immediate confirmation of the nationalities of the other two.

"The head of state expresses again France's determination to continue to work with the International Security Assistance Force (ISAF) to restore peace and stability in this country and contribute to its development," the president's office said in a statement.

The Taliban quickly claimed responsibility for bringing down the helicopter with a rocket-propelled grenade. Although it often exaggerates incidents involving foreign troops, a U.S. official in Washington said the helicopter was believed to have been shot down.

NATO-led ISAF confirmed the death toll overnight, which was first announced by Afghan President Hamid Karzai, and said the cause of the crash was still being investigated.

"The two presidents reaffirmed their commitment to the mission in Afghanistan, which is critical to the security of both our countries, and agreed to stay in close contact," the White House said in a statement.

ISAF officials in Kabul remained tight-lipped on Sunday about possible causes of the crash and said the process of recovering the bodies from the site in a valley about 80 kilometres (50 miles) southwest of the capital was still ongoing.

The deadly crash comes at a time of growing unease in the United States and Europe about the increasingly unpopular and costly war. The last foreign combat troops are due to leave Afghanistan by the end of 2014 but some U.S. lawmakers are asking whether that timetable is fast enough.

Despite its proximity to Kabul, the area is one of the most dangerous in central Afghanistan, with fighters from the Taliban, the al Qaeda-linked Haqqani network and other militant groups all active.

"No words describe the sorrow we feel in the wake of this tragic loss," said General John Allen in a statement released overnight. Allen took over from General David Petraeus three weeks ago as commander of all foreign troops in Afghanistan.

The crash was the deadliest single incident for U.S. troops in Afghanistan since the Taliban was toppled by U.S.-backed Afghan forces in late 2001, ISAF said.

A U.S. official said some of the dead Americans were members of SEAL Team 6, but none of them had been part of the bin Laden raid in Pakistan in May.

Defense Secretary Leon Panetta said in a statement on Saturday the United States would "stay the course" to complete the mission in Afghanistan, a sentiment echoed by NATO Secretary General Anders Fogh Rasmussen.

The weekend's devastating death toll will likely raise more questions about the security transition and how much longer troops should stay.

"While acknowledging the immense personal tragedy of the loss of life in this helicopter disaster it is even more important to acknowledge that a greater tragedy would be to buckle under an understandable wave of emotion, and use it as a reason to withdraw now," General Richard Dannatt, British army commander from 2006 to 2009, wrote in the Sunday Telegraph.

With doubts lingering about the cause of the crash, Karzai met his security advisers on Sunday to discuss what he called the "helicopter incident." He warned them to be on guard for more attempts by insurgents to derail the transition process.

"As there is the transition process going on, enemies of Afghanistan want to disrupt the national process by any means," Karzai said in a statement released by the presidential palace.

U.S. and other NATO commanders have claimed success in reversing a growing insurgency in the Taliban's southern heartland, although insurgents have demonstrated an ability to adapt their tactics and mount attacks in other areas.

But violence is at its worst in Afghanistan since the start of the war, with high levels of foreign troop deaths and record civilian casualties during the first six months of 2011.

Last year was the deadliest of the war for foreign troops in Afghanistan with 711 killed. The crash in Maidan Wardak and Sunday's deaths took the toll of foreign troops killed so far in 2011 to at least 383. More than two-thirds were American.