Source: DTN News - - This article compiled by Roger Smith from reliable sources  Boeing (NSI News Source Info) TORONTO, Canada - January 27, 2012: The Boeing Company [NYSE: BA] today announced that it has renewed its work agreement with Israel Aerospace Industries (IAI) on the Arrow Weapon System, and enhanced the IAI-Boeing Strategic Teaming Agreement to explore and develop new opportunitiesin the missile defense arena. Leaders of both companies gathered at IAI headquarters in Tel Aviv on Jan. 19 for a signing ceremony that also marked the 10th anniversary of the Boeing and IAI partnership. 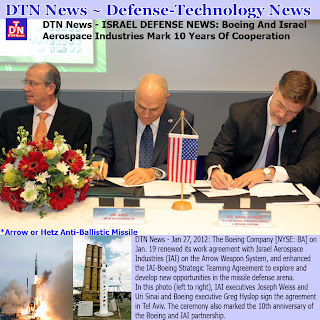 "The Arrow program demonstrates Boeing's commitment to developing international missile defense partnerships around the globe," said Boeing Network & Space Systems President Roger Krone. "We are pleased to mark this 10-year milestone by expanding our cooperation on missile defense initiatives with our partner IAI."
Over the past 10 years, Arrow, the world's first operational national missile defense system, has become a vital anti-ballistic-missile defense strategy for Israel's national defense. IAI is the prime contractor for the Arrow Weapon System. It initiated, developed and deployed the in-service Arrow 2 program and, together with Boeing, is developing the Arrow 3 system -- a crucial asset in Israel's multi-tier anti-ballistic-missile defense strategy.
"This new agreement is the next logical step in our relationship with Boeing and a strong opportunity for both companies to play a bigger role in the missile defense market. It is based on a strong foundation of successful cooperation," said Itzhak Nissan, IAI president and CEO.
"Boeing's relationship with IAI has produced an innovative, versatile and affordable advanced missile defense capability. We look forward to our continued partnership and the development of the next generation of Arrow interceptor," said Greg Hyslop, vice president and general manager of Boeing Strategic Missile and Defense Systems.
The Arrow program has been a cooperative effort between the U.S. Missile Defense Agency and the Israel Missile Defense Organization since 2002.
A unit of The Boeing Company, Boeing Defense, Space & Security is one of the world's largest defense, space and security businesses specializing in innovative and capabilities-driven customer solutions, and the world's largest and most versatile manufacturer of military aircraft. Headquartered in St. Louis, Boeing Defense, Space & Security is a $32 billion business with 63,000 employees worldwide. Follow us on Twitter: @BoeingDefense.
Contact:
Scott Day
Strategic Missile and Defense Systems
Office: +1 703-872-4206
Mobile: +1 703-403-3083
scott.day2@boeing.com
*Link for This article compiled by Roger Smith from reliable sources Boeing *Speaking Image - Creation of DTN News ~ Defense Technology News *This article is being posted from Toronto, Canada By DTN News ~ Defense-Technology News Contact:dtnnews@ymail.com ©COPYRIGHT (C) DTN NEWS DEFENSE-TECHNOLOGY NEWS

Source: DTN News - - This article compiled by Roger Smith from reliable sources Scotsman (NSI News Source Info) TORONTO, Canada - January 27, 2012: The United States is to increase its fleet of unmanned drones by nearly a third and rely more on small, specially trained ground units as part of a slimmed down military.As part of massive cuts to its budget, the army plans to shed 80,000 soldiers over the next few years, defence secretary Leon Panetta announced yesterday. 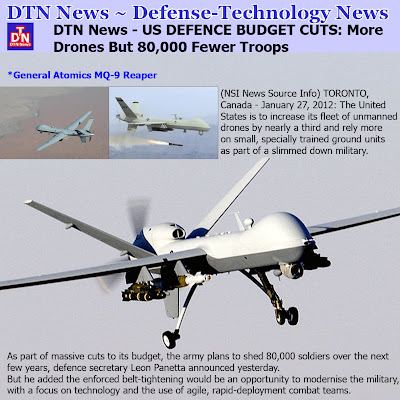 But he added the enforced belt-tightening would be an opportunity to modernise the military, with a focus on technology and the use of agile, rapid-deployment combat teams.
The US would also be refocusing it attention towards China and the Pacific, while seeking strategic partnerships in areas in which it will be cutting its presence, such as Europe.The rethink was prompted by the need to find $487 billion (£310bn) in spending cuts over the next decade. Mr Panetta conceded it meant slashing the number of soldiers in the army from about 570,000 to 490,000 over the next decade.Speaking from the Pentagon, he said: “The military will be smaller and leaner. But it will be agile, flexible, rapidly deployable and technologically advanced. It will be a cutting-edge force”.
He said he refused to allow the “hollowing out” of the US’s military might, and that the new strategy would “emphasise special operation forces”.The effectiveness of these small, dedicated units was seen in the assassination of terror chief Osama bin Laden last year and the rescue of a US aid worker and her Danish colleague from Somali pirates this week.The envisaged refocusing on smaller rotational bases will be at the expense of larger military sites, with closures expected to take place as part of the budget cuts.There will be more money available for technologically advanced weapons and measures to counter cyber-terrorism.Mr Panetta did not say how many more drones would be developed under the plan, but an increase of about 30 per cent has previously been reported.Any rise in the use of umanned aircraft is likely to be met with suspicion by those who believe that their use endangers innocent life.
Figures from the London-based Bureau of Investigative Journalism show CIA drones stuck Pakistan 75 times in 2011, causing up to 655 fatalities. The majority of those killed were alleged militants, but as many as 126 civilians may also have lost their lives, the figures suggest.
The shrinking of the US army was signalled earlier this month in comments made by president Barack Obama.
Outlining plans to trim the armed forces, he said the US was ”turning a page on a decade of war”, with the end of hostilities in Iraq and the drawdown of troops in Afghanistan.
The president also fired a warning shot over China, by indicating the US would refocus its attention towards the Pacific region. As part of that repositioning, the US plans to station troops in Australia and dock navy ships in Singapore.
Meanwhile, US officials have been in talks with their counterparts in the Philippines over greater co-operation and an intensification of war drills in the region. It comes amid greater concern in Washington over both China’s rise as a military power and instability on the Korean peninsula following the death of North Korean leader Kim Jong-il.