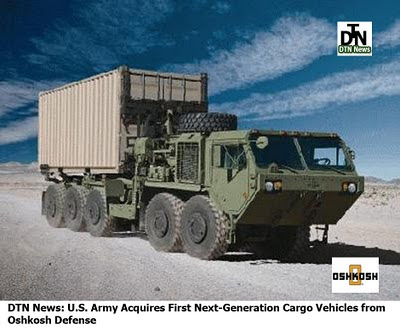 “The heavy tactical trucks that we supply to the U.S. Army have evolved with technological advancements over the years to meet the changing threats and demands of the modern battlefield,” said Mike Ivy, vice president and general manager of Army Programs for Oshkosh Defense. “Whether Iraq, Afghanistan or any other location in the world, the Army can count on Oshkosh for on-time delivery of quality products backed by best-in-class sustainment services. We're proud to serve the men and women who serve our nation.”

The PLS is the backbone of the Army’s distribution and resupply system. Built to transport ammunition and other critical supplies needed in battle, the PLS has proven its ability in front-line resupply missions in Bosnia, Kosovo, Iraq and Afghanistan. Together, the PLS truck and trailer form a complete system that reduces the need for forklifts or other material-handling equipment. The Long-Term Armor Strategy (LTAS)-compliant PLS A1 can accept add-on armor and uses an Oshkosh TAK-4® independent front suspension for improved off-road mobility.

Oshkosh will deliver more than 1,050 PLS A1 trucks under the orders, as well as nearly 150 Heavy Expanded Mobility Tactical Truck (HEMTT) A4s. Deliveries are scheduled to be completed by August 2012. The combined orders are valued at more than $459 million.

About Oshkosh Defense Oshkosh Defense, a division of Oshkosh Corporation, is an industry-leading global designer and manufacturer of tactical military trucks and armored wheeled vehicles, delivering a full product line of conventional and hybrid vehicles, advanced armor options, proprietary suspensions and vehicles with payloads that can exceed 70 tons. Oshkosh Defense provides a global service and supply network including full life-cycle support and remanufacturing, and its vehicles are recognized the world over for superior performance, reliability and protection. For more information, visit www.oshkoshdefense.com.

Forward-Looking Statements This press release contains statements that the Company believes to be “forward-looking statements” within the meaning of the Private Securities Litigation Reform Act of 1995. All statements other than statements of historical fact, including, without limitation, statements regarding the Company’s future financial position, business strategy, targets, projected sales, costs, earnings, capital expenditures, debt levels and cash flows, and plans and objectives of management for future operations, are forward-looking statements. When used in this presentation, words such as “may,” “will,” “expect,” “intend,” “estimate,” “anticipate,” “believe,” “should,” “project” or “plan” or the negative thereof or variations thereon or similar terminology are generally intended to identify forward-looking statements. These forward-looking statements are not guarantees of future performance and are subject to risks, uncertainties, assumptions and other factors, some of which are beyond the Company’s control, which could cause actual results to differ materially from those expressed or implied by such forward-looking statements. These factors include the impact on revenues and margins of the projected decrease in M-ATV production rates; the cost of any warranty campaigns related to the Company’s products; the Company’s ability to start production under the FMTV contract at targeted margins; the cyclical nature of the Company’s access equipment, commercial and fire & emergency markets, especially during periods of global economic weakness and tight credit markets; the duration of the ongoing global economic weakness, which could lead to additional impairment charges related to many of the Company’s intangible assets and/or a slower recovery in the Company’s cyclical businesses than equity market expectations; the expected level and timing of U.S. DoD procurement of products and services and funding thereof; risks related to reductions in government expenditures in light of U.S. defense budget pressures and an uncertain DoD tactical wheeled vehicle strategy; the potential for the U.S. government to competitively bid the Company’s Army and Marine Corps contracts; the consequences of financial leverage associated with the JLG acquisition, which could limit the Company’s ability to pursue various opportunities; risks related to the collectability of receivables, particularly for those businesses with exposure to construction markets; risks related to production delays as a result of the economy’s impact on the Company’s suppliers; the potential for commodity costs to rise sharply, particularly in a future economic recovery; risks related to costs and charges as a result of facilities consolidation and alignment; risks associated with international operations and sales, including foreign currency fluctuations and compliance with the Foreign Corrupt Practices Act; risks related to disruptions in the Company’s distribution networks; and the potential for increased costs relating to compliance with changes in laws and regulations. Additional information concerning these and other factors is contained in the Company’s filings with the Securities and Exchange Commission. The Company disclaims any obligation to update such forward-looking statements.

PARIS - French Defense Minister Hervé Morin told lawmakers he favored tackling an immediate problem in the Afghan theater by buying a medium-altitude, long-endurance drone off the shelf, while seeking an Anglo-French cooperation to build a European system in the medium term. ... full story 15 Oct 15:32 EDT (19:32 GMT)

TEL AVIV - Spurned by Turkey, a partner in bilateral and multilateral military exercises for more than a decade, the Israel Air Force is now conducting routine drills with Ankara's Aegean rival, Greece. The large-scale drill involved UH-60 and AH-64 helicopters and fighter jets from the Israel Air Force, along with Apaches, AS332 Super Puma and fighters from the Hellenic Air Force. ... full story 15 Oct 14:16 EDT (18:16 GMT)