Speaking to members of a House Appropriations subcommittee, Panetta said Iran is becoming increasingly isolated in the world. 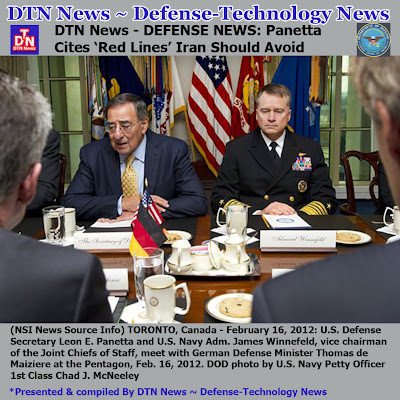 “The international community has sent a very clear message,” he said. “We will not tolerate this. You’ve got to change your ways. You’ve got to come into the international community. You’ve got to abide by international laws, rules and regulations.”
The United States and the international community share the same concerns, Panetta noted. First, he said, “We will not allow Iran to develop a nuclear weapon.”
Panetta said intelligence reports clearly indicate that Iran continues to develop its enrichment capability; however, “intelligence does not show they’ve made the decision to proceed with developing a nuclear weapon.”
“That is the red line that would concern us and that would ensure the international community, hopefully together, would respond,” he said.
The international community also will not allow Iran to close the Strait of Hormuz, the secretary said. The strait is the only sea passage to the open ocean for petroleum-producing nations in the Persian Gulf region. Iran recently threatened to cut off access to the strait if the United States continues to maintain an aircraft carrier presence there.
Other concerns include the spread of violence, the country’s support of terrorism and its attempts to undermine other nations, Panetta added.
“All of that has been made very clear,” he said.
The international community has implemented strong diplomatic and economic sanctions that are having “a very strong impact,” he said.
“We are open … to negotiations with them to try to find a diplomatic solution to these issues, but we do keep all options on the table in the event the red lines, I just made very clear, are crossed,” Panetta said.
*Link for This article compiled by Roger Smith from reliable sources By Elaine Sanchez - American Forces Press Service*Speaking Image - Creation of DTN News ~ Defense Technology News *This article is being posted from Toronto, Canada By DTN News ~ Defense-Technology News Contact:dtnnews@ymail.com ©COPYRIGHT (C) DTN NEWS DEFENSE-TECHNOLOGY NEWS

Black Hills Ammunition, Inc.*, Rapid City, S.D., is being awarded a firm-fixed-price, indefinite-delivery/indefinite-quantity base year contract plus four option years with a possible value of $23,391,000.  This contract is for the manufacture of nine various types of ammunition including five varieties of 5.56mm ammo, three varieties of 7.6mm ammo and one variety of .300 caliber ammo.  The ammunition will support the warfighter mission essential requirements.  Work will be performed in Rapid City, S.D., and is expected to be completed Sept. 30, 2016.  The applicable procurement of ammunition, Navy & Marine Corps contract funds will not expire by the end of the current fiscal year.  This contract was not competitively procured.  The NAVSUP Weapon Systems Support, Mechanicsburg, Pa., is the contracting activity (N00104-12-D-K900).

Honeywell International, Inc., Defense & Space Electronic Systems, Albuquerque, N.M., is being awarded an $8,145,560 modification to a previously awarded firm-fixed-price contract (N00019-10-C-0061) to exercise an option for the procurement of 124 full rate production advanced multi-purpose displays (70 5x5 forward displays; 36 5x5 aft displays; and 18 8x10 displays) for Lot 35 F/A-18F and EA-18G aircraft.  Work will be performed in Albuquerque, N.M., and is expected to be completed in December 2013.  Contract funds will not expire at the end of the current fiscal year.  The Naval Air Systems Command, Patuxent River, Md., is the contracting activity.

Raytheon Network Centric Systems, Marlborough, Mass., is being awarded a $7,027,114 cost-plus-fixed-fee delivery order against a previously issued basic ordering agreement (N00421-09-G-0002) for engineering and technical services in support of the air traffic, navigation, integration, and coordination system for the Air Traffic Control Systems Division (AIR-4.5.8).  These services will provide engineering changes, field support, maintenance support, depot requirements, and system restoration.  In addition, the work provided will include fault isolation, assembly, disassembly, fabrication, refurbishment, upgrading, purchasing of parts, components, assemblies, and materials, and fleet support activities to return the system to a level of serviceability comparable to a new system.  Work will be performed in St. Inigoes, Md., and is expected to be completed in February 2013.  Contract funds will not expire at the end of the current fiscal year.  The Naval Air Warfare Center Aircraft Division, Patuxent River, Md., is the contracting activity.

DEFENSE LOGISTICS AGENCY
Sonosite, Inc., Bothell, Wash., was issued a modification exercising the third option year on contract SPM2D1-09-D-8339/P00023.  The award is a fixed-price with economic price adjustment, indefinite-delivery/indefinite-quantity contract with a maximum $46,303,658 for radiology systems, subsystems, and components.  There are no other locations of performance.  Using services are Army, Navy, Air Force, Marine Corps and federal civilian agencies.  There were 43 responses to the Web solicitation.  Type of appropriation is fiscal 2012/2013 Defense Working Capital Funds.  The date of performance completion is Feb. 18, 2013.  The Defense Logistics Agency Troop Support, Philadelphia, Pa., is the contracting activity.

Tullahoma Industries, L.L.C.*, Tullahoma, Tenn., was awarded a firm-fixed-price contract with a maximum $8,868,065 for soft shell, extreme cold/wet weather jackets.  Other location of performance is Alabama.  Using service is Army.  There were nine responses to the Web solicitation.  Type of appropriation is fiscal 2012/2013 Defense Working Capital Funds.  The date of performance completion is June 15, 2013.  The Defense Logistics Agency Troop Support, Philadelphia, Pa., is the contracting activity (SPM1C1-12-D-1024).

ObjectVideo, Inc., Reston, Va. is being awarded a $9,999,919 cost-plus-fixed-fee contract for creation of an analyst tool to extract relevant information from unstructured imagery that contains little or no metadata by integrating existing computer vision and pattern matching algorithms.  The location of the performance is Reston, Va., and Colombia, Md.  Work is expected to be completed by February 2016.  Air Force Research Laboratory/RKIF, Rome, N.Y., is the contracting activity (FA8750-12-C-0105).

Source: DTN News - - This article compiled by Roger Smith from reliable sources Reuters(NSI News Source Info) TORONTO, Canada - February 16, 2012:  The Afghan Taliban and the United States have made only "exploratory" contacts for possible reconciliation which do not involve the Kabul government, the Afghan ambassador to Pakistan said on Thursday. 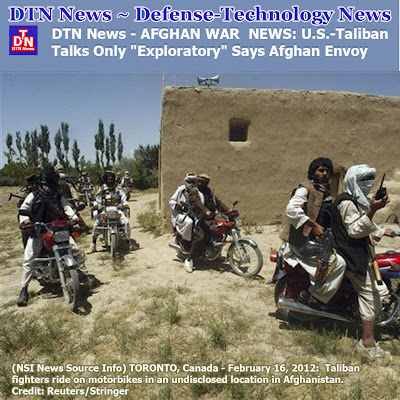 The Wall Street Journal said that the U.S. and Afghan governments had begun secret three-way talks with the Taliban, based on an interview it conducted with Afghan President Hamid Karzai."I must emphasize that word 'exploratory'. They are not talks," Afghan ambassador to Pakistan Umar Daudzai told Reuters."When there's talks, it's supposed to be between the Afghan government and the Taliban. We have not reached to that stage although we wish to reach to that stage."The Wall Street Journal quoted Karzai as saying the Taliban were "definitively" interested in a peace settlement to end the 10-year war in Afghanistan, and that all three sides were now involved in discussions.It said Karzai had declined to specify the location of the talks or go into further detail, saying he feared this could damage the process.Taliban spokesman Zabihullah Mujahid also said the group had not held talks with the Karzai government.The Afghan Taliban announced last month it would open a political office in Qatar, suggesting the group may be willing to engage in negotiations that could likely give it government positions or official control over much of its historical southern heartland."At a high level, (there are) secret talks and American-Taliban talks. I'm not aware of any other than the Qatar process," said Daudzai.
"The Qatar process is exploratory contacts between Taliban and the United States."
The Afghan ambassador said the Kabul government's contacts with the Taliban were limited to communications between low-level officials and local insurgent commanders.
Washington wants to accelerate contacts with the Taliban so it can announce serious peace negotiations at a NATO summit in May, officials say, in what would be a welcome bright spot in Western efforts to end the war in Afghanistan.
The United States hopes it can declare a start to authentic political negotiations between the Afghan government and the Taliban at the May 20-21 summit in Chicago, after a year of initial, uncertain contacts with militant representatives.
It would be a needed victory for the White House and its NATO partners in Afghanistan as they struggle to contain a resilient insurgency and train a local army while moving to bring their troops home over the next three years.
(Additional reporting by Chris Allbritton in ISLAMABAD and Rob Taylor in KABUL; Editing by Michael Georgy and Nick Macfie)
*Link for This article compiled by Roger Smith from reliable sources Reuters*Speaking Image - Creation of DTN News ~ Defense Technology News *This article is being posted from Toronto, Canada By DTN News ~ Defense-Technology News Contact:dtnnews@ymail.com ©COPYRIGHT (C) DTN NEWS DEFENSE-TECHNOLOGY NEWS

Source: DTN News - - This article compiled by Roger Smith from reliable sources By Ben West - Stratfor (NSI News Source Info) TORONTO, Canada - February 16, 2012: Mexican authorities announced Feb. 8 the largest seizure of methamphetamine in Mexican history -- and possibly the largest ever anywhere -- on a ranch outside of Guadalajara. The total haul was 15 tons of pure methamphetamine along with a laboratory capable of producing all the methamphetamine seized. While authorities are not linking the methamphetamine to any specific criminal group, Guadalajara is a known stronghold of the Sinaloa Federation, and previous seizures there have been connected to the group. 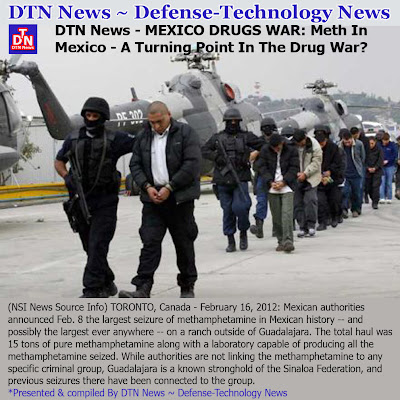 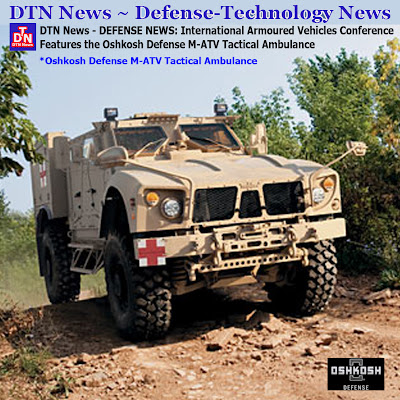 The vehicle is the latest variant within the Oshkosh MRAP All-Terrain Vehicle (M-ATV) family. More than 8,100 life-saving M-ATVs are currently fielded in Afghanistan.“We’re bringing our M-ATV tactical ambulance to the International Armoured Vehicles Conference to showcase the modularity of the M-ATV platform and breadth of the family of vehicles,” said Serge Buchakjian, senior vice president and general manager of International Programs for Oshkosh Defense. “The M-ATV is a proven solution for armed forces looking to modernize their fleets with increased off-road mobility and protection across a variety of missions.”The Oshkosh M-ATV tactical ambulance is designed to help military medics reach and treat casualties in hostile environments across rugged terrain. Quick and easy stretcher loading enables prompt extraction of patients, and the best-in-class Oshkosh TAK-4® independent suspension system can cover tougher terrain at higher speeds than current fleets.
A fully functional ambulance, the M-ATV tactical ambulance has mounting provisions that provide options for a complete suite of medical equipment. The vehicle is available in two configurations that provide ample room to treat two patients on stretchers or four ambulatory patients.
The tactical ambulance is the newest configuration in the M-ATV family of vehicles, which is designed to maximize parts commonality and simplify maintenance and support.About Oshkosh DefenseOshkosh Defense, a division of Oshkosh Corporation, is an industry-leading global designer and manufacturer of tactical military trucks and armored wheeled vehicles, delivering a full product line of conventional and hybrid vehicles, advanced armor options, proprietary suspensions and vehicles with payloads that can exceed 70 tons. Oshkosh Defense provides a global service and supply network including full life-cycle support and remanufacturing, and its vehicles are recognized the world over for superior performance, reliability and protection. For more information, visit www.oshkoshdefense.com.
About Oshkosh CorporationOshkosh Corporation is a leading designer, manufacturer and marketer of a broad range of specialty access equipment, commercial, fire & emergency and military vehicles and vehicle bodies. Oshkosh Corporation manufactures, distributes and services products under the brands of Oshkosh®, JLG®, Pierce®, McNeilus®, Medtec®, Jerr-Dan®, Oshkosh Specialty Vehicles, Frontline™, SMIT™, CON-E-CO®, London® and IMT®. Oshkosh products are valued worldwide in businesses where high quality, superior performance, rugged reliability and long-term value are paramount. For more information, visitwww.oshkoshcorporation.com/.
®, TM All brand names referred to in this news release are trademarks of Oshkosh Corporation or its subsidiary companies.Related Oshkosh Defense M-ATV Tactical Ambulance Images By DTN News; 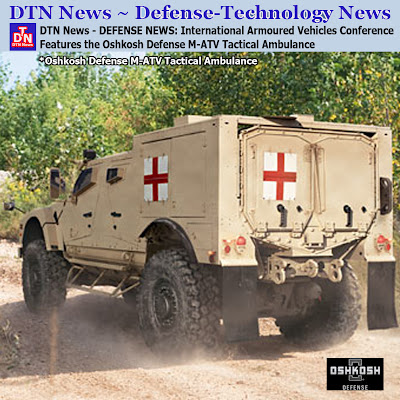 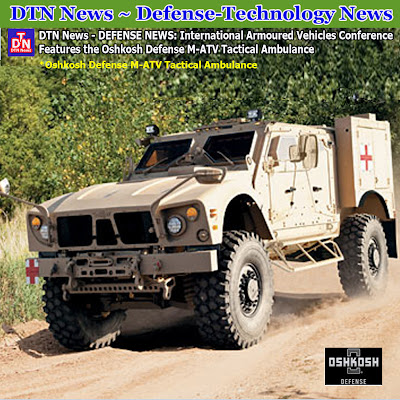