Russia became the world’s second largest arms exporter in 2011 after the United States, the head of the Moscow-based arms think tank Centre for Analysis of World Arms Trade (CAWAT), Igor Korotchenko said on Friday.
The CAWAT ranking revealed that Russia occupied the second position for world arms sales in 2011 with $11.29 billion in revenues, which accounts for 16.1 percent of all international arms supplies, Korotchenko said. “The forecast for 2012 is $11.3 billion or 17.3 percent of global arms sales.”
The Unitied States, however, dominates world arms exports, with over 40 percent of trade globally, or $28.76 billion.
Korotchenko also said that Russia had scored high records on arms exports despite the fact that it had lost the Iranian market because of the arms embargos imposed on Tehran by Washington. Moscow also supported arms sanctions against Libya, suspending all contracts for the supply of military hardware to the country.
The top ten biggest arms suppliers include France, Germany, Britain, Italy, Israel, Spain, Sweden and China, according to the CAWAT ranking.
Russia exports weaponry to over 100 countries.
Its main arms customers are India, Algeria, China, Venezuela, Malaysia and Syria. Vietnam also emerged as a key importer after it signed a deal to buy submarines, aircraft and other military hardware from Russia late last year.

Russia is ready for constructive dialogue on missile defense with its Western partners but hopes for give and take, President Dmitry Medvedev said on Thursday.
“I only want to confirm that we are open for constructive dialogue and substantive work with our partners, if they learn to listen to us,” Medvedev said in his final state-of-the-nation address before he steps down next year.
“We count on reciprocity in order to reach mutually acceptable solutions as soon as possible and to maintain an atmosphere of trust.”
Russia-NATO missile defense talks have stalled as Moscow is seeking legally binding guarantees that the U.S.-backed European missile defense program will not be directed against it.
Washington, however, refuses to provide the guarantees, saying the shield is directed against rogue states such as Iran and North Korea. 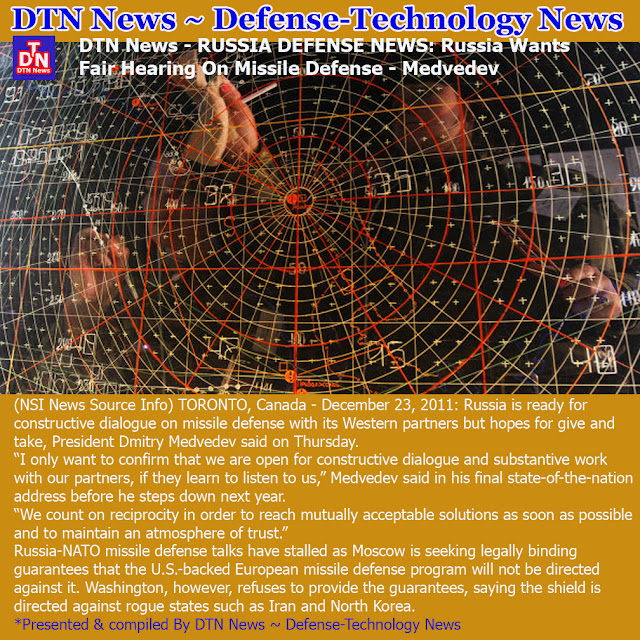