Hindus are upset at the depiction of the Hindu Goddess Lakshmi on swimwear displayed at recently concluded Rosemount Australian Fashion Week (RAFW), held in Sydney, Australia, which they termed repugnant. 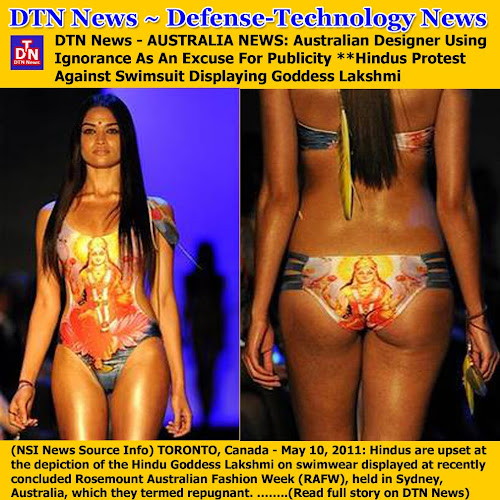 Indian political activists of the Bharatiya Janata Party (BJP) burnt photocopies of a model wearing the controversial swimwear in protest against Australian designer Lisa Burke who produced swimwear featuring the Hindu deity. The controversy began when models walked the ramp on May 4 in the ungodly swimwear, which can be considered an insult to members of the Hindu community

Lakshmi is the goddess of good fortune and beauty in Hinduism and is also known as 'world-mother'. Lisa Burke's Lisa Blue Swimwear claims to represent "the girl of the future who can be sexy, beautiful, powerful and environmentally aware at the same time."

Acclaimed Indian fashion designer Ritu Kumar feels that many contemporary designers use Hindu imagery "without understanding the symbolism attributed to our gods and goddesses." Ashish Soni, another well-known fashion designer echoed her viewpoint when he said to the Times of India, "Most of this happens out of ignorance. They don't realize the use of godly images, and the fact that they are actually deities worshiped."

Hindu American statesman Rajan Zed, said that it was disturbing to see goddess Lakshmi, who was highly revered in Hinduism, on a swimwear displayed by a model at a fashion show. Lakshmi was meant to be worshiped in temples or home shrines and not for pushing swimwear in fashion shows for mercantile greed of an apparel company, Zed argued.

Zed, who is President of Universal Society of Hinduism, asked the manufacturer Lisa Blue Swimwear and RAFW organizers to publicly apologize, and immediately recall all swimwear, which showed Hindu Goddess Lakshmi. Inappropriate usage of Hindu deities or concepts for commercial or other agenda was not okay as it hurt the devotees, he said. Symbols of any faith, larger or smaller, should not be mishandled, Zed stressed.

Meanwhile, Lisa Blue in a press release issued an apologia: "The use of images of Goddess Lakshmi was not in any way a measure of calculated risk taking, simply it was a desire to celebrate different cultures and share that through our brand.

"We would like to offer an apology to anyone we may have offended and advise that the image of Goddess Lakshmi will not appear on any piece of Lisa Blue swimwear for the new season, with a halt put on all production of the new range and pieces shown on the runway from last week removed. This range will never be available for sale in any stockists or retail outlets anywhere in the world.
"We apologise to the Hindu community and take this matter very seriously," said the designer's web site.

Indeed, ignorance is bliss, but sometimes it can turn into blisters! What do you feel? Please post your valuable comments below.

At other time there are special temples which are dedicate to Goddess Lakshmi so people can go and pray there and ask for wealth and richness. [23] Whether or not we need religion is really not the issue. I would say not, I do not believe in any god, but some people do & I respect their right to do so, without ridicule. It is inappropriate to put any religious iconography on a piece of swimwear, worn by a 1/2 clad woman. It doesn't matter whether she looks good in it or not. It is essentially mocking & deliberately (or displaying breathtaking ignorance in the act of) belittling someone elses belief. Have some respect for other people & their choices in life, or maybe you are happy for someone to have no respect for you.[28] Regardless of how seriously Lisa Burke and her team are taking the matter, some doubt the apology will have any effect. KOHLI: Where ever she has picked up these pictures from, they have not really come out of nowhere. They would have come through the internet or somewhere and I don't think designers normally tend to just do something without doing their homework. [23]