Source: DTN News / The New York Times By CLIFFORD J. LEVY and ELLEN BARRY (NSI News Source Info) MOSCOW, Russia - April 3, 2010: Baby-faced, she looks barely a teenager. But the pistol she is holding in the photograph suggests the violent destiny that she would choose: blowing herself up in a subway station in Moscow during the morning rush on Monday. 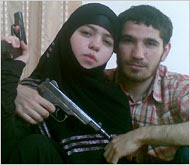 In this photo distributed by Newsteam, a Russian news agency, and published in Kommersant, a Russian daily newspaper, Dzhennet Abdullayeva is identified posing with her husband Umalat Magomedov. Russian investigators have said that Ms. Abdullayeva, 17, was one of the suicide bombers who blew themselves up in the Moscow subway on March 29, and Mr. Magomedov was a militant Islamist who was killed in 2009. The agency did not give a date for the photo or explain the circumstances in which it was taken.

And posing with his arm around this 17-year-old woman is the man who would put her on this path, a 30-year-old militant leader who lured her from her single mother, drew her into fundamentalist Islam and married her. He was killed by federal forces in December, driving her to seek revenge.

On Friday, as the photograph circulated widely, the couple turned into an unsettling symbol of Islamic militancy inRussia — deeply repugnant to most people but also likely to be embraced by other extremists as a propaganda coup, a kind of Bonnie and Clyde of the insurgency.

The story of the woman, Dzhanet Abdullayeva, from Dagestan, a volatile, predominantly Muslim region of southern Russia, near Chechnya, speaks to the challenges facing the Kremlin as it vows to stamp out the armed underground. Harsher measures can backfire, further radicalizing a population alienated by endemic poverty and corruption. And men are not the only threat.

“These religious ideas are very attractive, because they give a kind of alternative to the world that exists,” said Zaur Gaziyev, editor in chief of Svobodnaya Respublika, an independent newspaper in Dagestan. “And so this young girl, who grew up without a father, who didn’t know male power, suddenly she meets a strong, brutal man, who gives her the sense of support.”

“She is herself a child,” Mr. Gaziyev said. “I don’t think she even understood what she was doing.”

In the photograph, Ms. Abdullayeva and her husband, Umalat Magomedov, are both brandishing weapons. In a separate photograph, she is by herself, holding a grenade. Her head is covered by a black Islamic scarf.

She is a striking example of the phenomenon of the so-called Black Widows — young women from the Caucasus who are deployed as human bombs and sent off to kill civilians in Russian cities, often after their husbands are killed by security forces.

Especially active in the early part of the last decade, they have carried out at least 16 bombings, including two aboard planes.

An official at the Interior Ministry of Dagestan said that it was not difficult for militant groups to recruit teenage women in a region with more women than men.

“The girls say, ‘Here is how you will live, and a man will always be beside you,’ ” the official said. “There is some romance about a man with a gun, with an automatic weapon. They make the fighters into heroes, naturally. These girls aren’t thinking straight.”

This happens with increasing frequency, as young women strike up Internet relationships with older men who persuade them to accept fundamentalist Islam and, out of naïveté and romantic impulse, to abandon their families, said Ragimat Adamova, news editor for Novoye Delo, a newspaper in Dagestan.

Ms. Adamova says that once women are brought into the militant structure, they typically never leave. If a woman’s husband is killed, she typically marries a second, third or even a fourth fighter.

“Crudely speaking, these women are passed along like trophies,” she said. “They do not let their girls go.”

A local official in a Kostek, a Dagestani village, said that Ms. Abdullayeva was raised there by her mother, who traded goods at a local market. Though the family left for a larger city several years ago, teachers in the village remember Ms. Abdullayeva as a promising student who recited poetry in local competitions, said the official, Aida Aliyeva.

“People are in shock here; they say it couldn’t be true,” Ms. Aliyeva said. “We are honest workers here. We think that the city must have had some influence on her, because we don’t have anything like that here.”

Ms. Abdullayeva’s husband was said to have been appointed a commander last spring byDoku Umarov, a former Chechen separatist who is now a proponent of global jihad andwho took responsibility for organizing the subway attacks.

On Dec. 31, federal forces stopped Mr. Magomedov’s car on a highway and killed him in a firefight. Ms. Abdullayeva then apparently made her decision.

Over the weekend, she and a second bomber, who has not been identified, took a private bus generally used by traders to Moscow from Dagestan, arriving in the city at 2 a.m. Monday, investigators said. The bus driver, who identified the two women from photographs, recalled that they were accompanied by a stocky man.

The police said they had identified an apartment rented by the women’s accomplices, where they say they believe the explosives were assembled. The accomplices met the women in a subway station and gave them belts fitted with explosives, an official told the Interfax news service.

“One of the men left with the first woman, and the other with the second,” the official said. “It is these two men who set off the bombs using a remote control.”

Ms. Abdullayeva’s life ended at 8:40 a.m. Monday at the Park Kultury subway station. Riding in a train, Sim Eih Xing, a medical student from Malaysia, said he noticed a strange-looking woman near the door “in a very abnormal posture.”

“She wasn’t wearing a scarf,” he told The Moscow Times. “Her eyes were very open, like on drugs, and she barely blinked, and it was scary. But I didn’t think she was a suicide bomber. I thought that she might be just mentally ill. So I stood behind her.”

He got off at Park Kultury and was a few feet away from the woman when the bomb detonated. Sparks appeared before his eyes and the station went silent. When he came to, he saw bodies in piles on the floor of the train. One of them was Ms. Abdullayeva’s.

Source: DTN News / Boeing (NSI News Source Info) KENNEDY SPACE CENTER, Fla., April 2, 2010: The Boeing Company [NYSE: BA] has been providing NASA with a wide variety of hardware and services -- including troubleshooting a stuck valve -- to ensure Space Shuttle Discovery launches as scheduled on April 5. One of two helium isolation valves in the shuttle's starboard Orbital Maneuvering System (OMS) pod failed in the open position on March 13 during helium tank preparations prior to OMS pod propellant loading. High-pressure helium is used to push propellants from storage tanks into small rocket motors used for routine orbital maneuvers. "As the original equipment manufacturer for the space shuttle and a major subcontractor on the program, Boeing engineers were a part of a NASA-led problem resolution team that analyzed the complex data and provided recommendations," said John Mulholland, Boeing Space Shuttle Program vice president and program manager. "The team concluded that given the redundancy in the system, the space shuttle is safe to fly with the valve in this configuration." Shuttle mission STS-131 will transport four experiment racks to the International Space Station (ISS), along with one systems rack, seven resupply stowage platforms, and four resupply stowage racks. Boeing engineers in Huntsville, Ala., designed and built two of the four experiment racks -- the Expedite the Processing of Experiments to Space Station (EXPRESS) Rack 7 and the Window Observational Research Facility (WORF). EXPRESS Rack 7 is a multipurpose payload rack system that will store and support science experiments aboard the ISS. Experiments can be easily integrated into the system, which includes structural interfaces, power, command/data, video, cooling, nitrogen, vacuum exhaust, and other items needed to operate experiments in space. The WORF fits over the U.S. Destiny lab window and will maximize the use of the window via attachments for cameras, camcorders, and other instruments to capture imagery of the Earth and space. The mission also will deliver an Ammonia Tank Assembly (ATA) that Boeing refurbished at Kennedy Space Center. The ATA works in conjunction with the station's External Active Thermal Control System to help cool the exterior and interior components of the ISS. The Boeing Checkout, Assembly and Payload Processing Services (CAPPS) team prepared the entire mission payload for launch. The services and support Boeing provides under its CAPPS contract include planning for and receiving payloads, maintaining associated ground support systems, integrating payloads with the space shuttle, launch support, and space shuttle post-landing payload activities. Boeing is the prime contractor to NASA for the ISS. In addition to designing and building all the major U.S. elements, Boeing also is responsible for ensuring the successful integration of new hardware and software -- including components from international partners -- as well as for providing sustaining engineering work for the ISS. A unit of The Boeing Company, Boeing Defense, Space & Security is one of the world's largest defense, space and security businesses specializing in innovative and capabilities-driven customer solutions, and the world's largest and most versatile manufacturer of military aircraft. Headquartered in St. Louis, Boeing Defense, Space & Security is a $34 billion business with 68,000 employees worldwide.
Posted by Defense-Technology News at 4/02/2010 10:40:00 AM No comments: