Source: DTN News - - This article compiled by K. V. Seth from reliable sources By Bill Gertz
(NSI News Source Info) TORONTO, Canada - March 12, 2014: China’s military has allowed the public release of the first photographs of a warplane variant deployed on the Liaoning — the aircraft carrier that saw its first visit by U.S. officials this week. 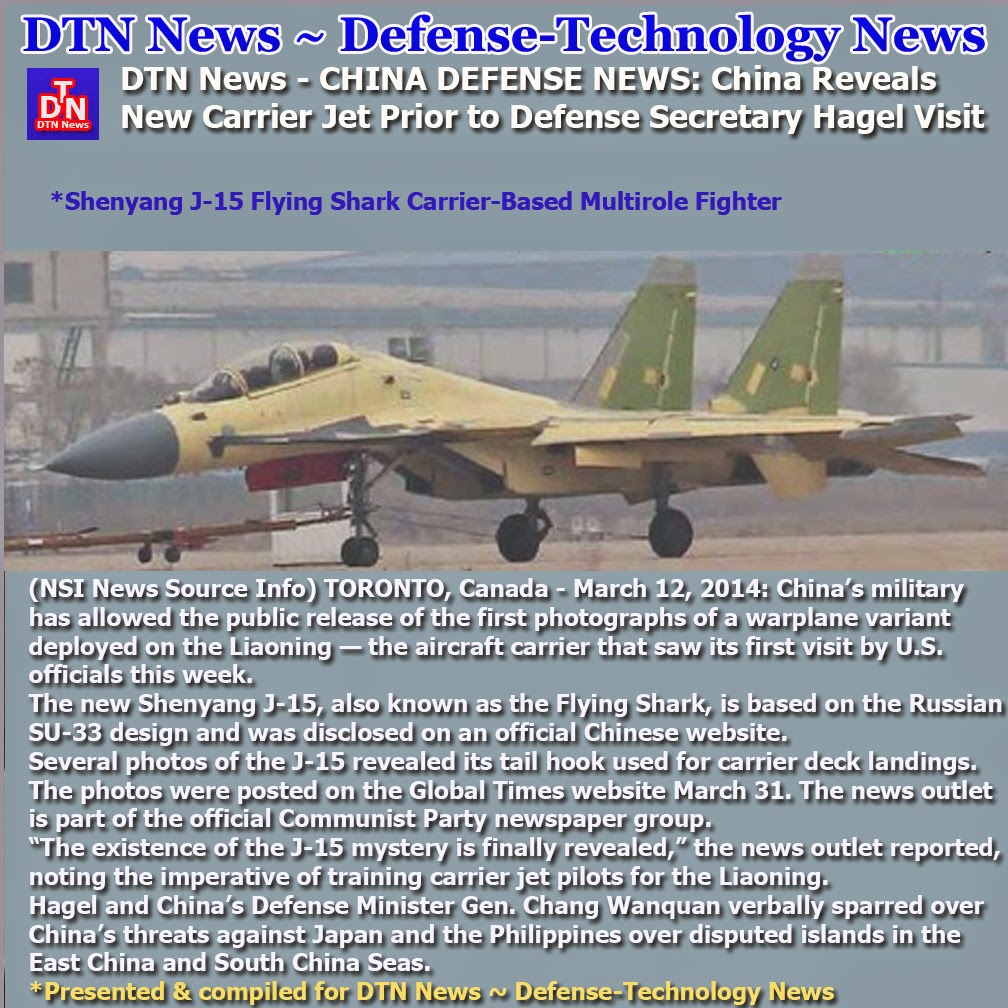 The new Shenyang J-15, also known as the Flying Shark, is based on the Russian SU-33 design and was disclosed on an official Chinese website.
Several photos of the J-15 revealed its tail hook used for carrier deck landings.
The photos were posted on the Global Times website March 31. The news outlet is part of the official Communist Party newspaper group.
“The existence of the J-15 mystery is finally revealed,” the news outlet reported, noting the imperative of training carrier jet pilots for the Liaoning.
Hagel and China’s Defense Minister Gen. Chang Wanquan verbally sparred over China’s threats against Japan and the Philippines over disputed islands in the East China and South China Seas.
Chang asserted that China would not be the first to use military force in the islands’ disputes, but blamed Japan for causing trouble.
At a press conference, Hagel wagged his finger and said “the Philippines and Japan are longtime allies of the United States. We have mutual self-defense treaties with each of those countries” and the United States is “fully committed to those treaty obligations.”
Rick Fisher, a specialist on the Chinese military said China’s development of the J-15 “will enable the [People’s Liberation Army’s] PLA Navy to train carrier-based pilots more efficiently, but it will also form the basis for a carrier strike-fighter to attack naval and land-based targets.”
The J-15 and a new J-16, also a twin-seat jet and copy of the Russian SU-27 will be outfitted with new active phased array radar and thus are more capable than the U.S. F-18 jets, which need to be upgraded, said Fisher, with the International Assessment and Strategy Center.
“China’s potential J-15 threat at a minimum justified an investment in better engines for the F/A-18E/F and far more capable air-to-air weapons,” he said.
“By giving Secretary of Defense Hagel the honor of the first foreign tour of their first aircraft carrier, China is signaling that in the next decade it will become a global competitor to the United States,” Fisher said. 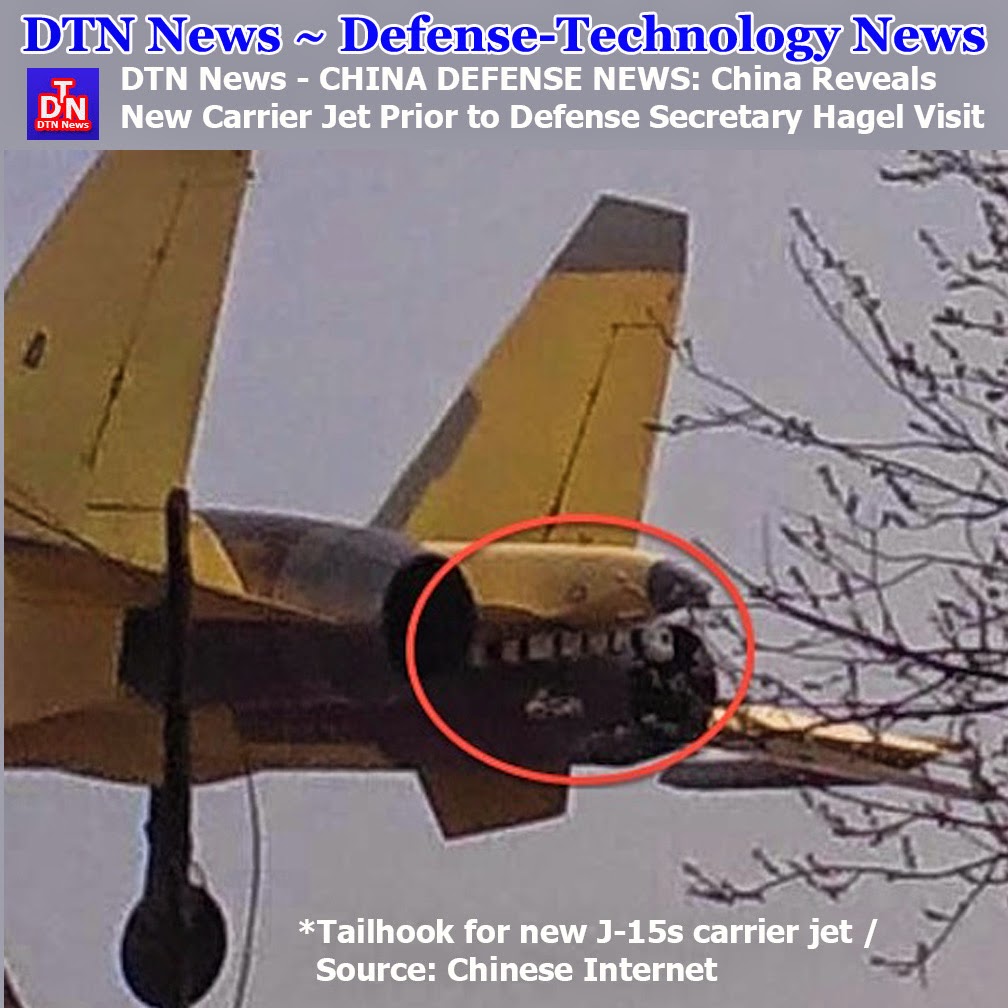 The timing of the J-15 disclosure shortly before the visit to China by Hagel appears similar to China’s military conducting the first J-20 stealth jet test flight in January 2011 in a bold political statement during the visit of then-Defense Secretary Robert Gates.
China frequently uses such disclosures to highlight its growing military prowess.
In this case, Hagel and several defense officials were given the first visit to China’s refurbished Soviet aircraft carrier, the Liaoning, in a move Beijing sought to demonstrate military openness.
Hagel, as part of a 10-day visit to the Asia Pacific, traveled to the port of Qingdao on Monday to visit the Liaoning.
The two-hour ship visit included a briefing on the carrier’s capabilities and operating schedule given by Chinese Capt. Zhang Zheng. 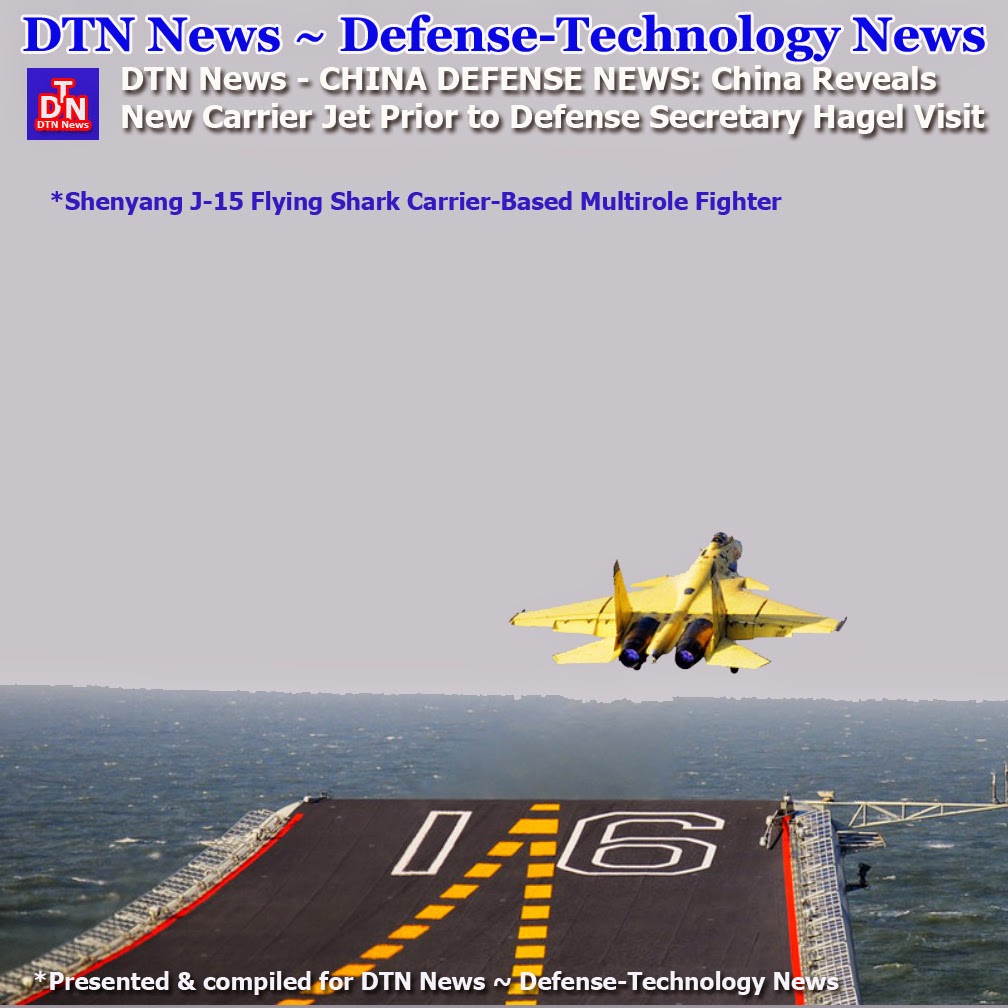 “The briefing lasted about 30 minutes, and then we saw medical facilities on the ship, some of the living quarters, the flight control station where they control flight operations, the pilot house, and the bridge, where they drive the ship,” a defense official told reporters.
The secretary and accompanying officials saw the flight deck and launch stations but did not see carrier landings and takeoffs.
“It’s a new capability they’re trying to develop, and I think they all appreciate the importance of it to the PLA, but also the difficulty of it,” the official said. “On more than one occasion, the officers who were with us said quite frankly they know they have a long way to go in naval aviation. It is a difficult military capability to develop and to perfect … and they expressed that they believe they can still learn much from us in terms of how to get better at it.”
The carrier has three launch stations for jets and four arresting wires used for landings.
The Chinese would not say when an operational air wing would be deployed on the carrier, which is still undergoing sea trials.
Fisher said that in addition to China’s carrier and plans for several indigenous carriers in the future another alarming development is China’s building of a new large cruiser-sized warship. “Sometimes called the Type 055, this cruiser may be close to 10,000 tons, will be equipped with a large number of anti-air, anti-ship, and land-attack missiles, and become the principal escort for China’s future aircraft carrier battle groups,” he said.
It also may employ Chinese laser and rail-gun weapons.
The new cruiser confirms assessments that “China is building its capacity for future global power projection” and not solely for regional use, Fisher said.
“As Washington tilts toward Asia, watch for Beijing to tilt to Africa and Latin America,” he said. “Seeking the capacity to deter China in Asia alone is no longer sufficient to defend American interests.”
The U.S. Navy will need to become larger and more capable to counter China’s “rebalance” against the United States, he said.
The carrier was purchased from the Soviet Union under an arrangement that it would not be used as a warship. China’s government initially said the ship would be used as a floating casino in Macau, a statement that turned out to be a deception. 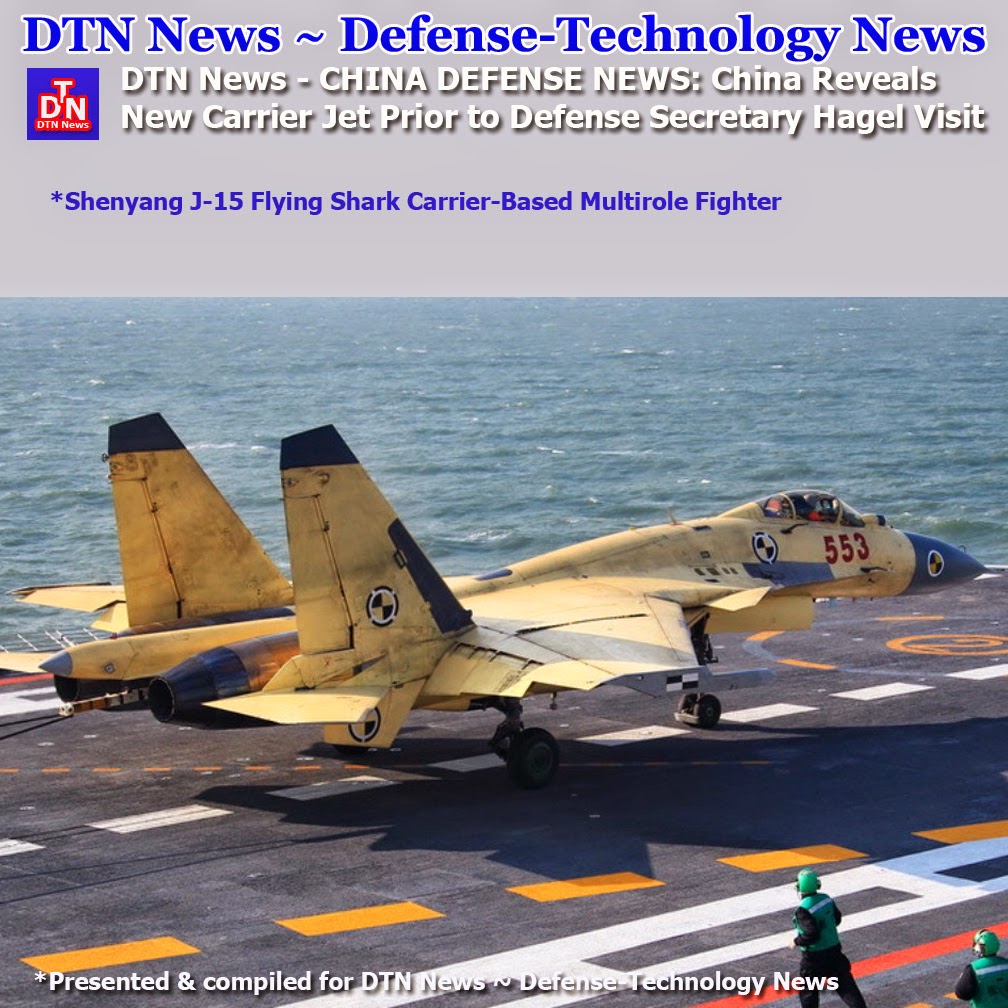 Defense officials hailed the visit as a step toward military transparency by China.
However, China’s military continues to refuse in substantive talks on its advanced military capabilities, including cyberwarfare, anti-satellite, and unique weapons, such as the DF-21D anti-ship ballistic missile.
Hagel spoke to the Chinese military’s National Defense University on Tuesday and said he hoped to develop closer military relations with the PLA.
“As the PLA modernizes its capabilities and expands its presence in Asia and beyond, American and Chinese forces will be drawn into closer proximity, which increases the risks of an incident, an accident, or a miscalculation,” Hagel said. “But this reality also presents new opportunities for cooperation.”
China nearly triggered a shootout between warships in the South China Sea when a Chinese naval ship nearly caused a collision with the guided missile cruiser, the USS Cowpens. The Cowpens was forced to turn sharply to avoid collision after the Chinese amphibious landing ship stopped within 100 yards of the cruiser.
During a press conference, Chinese Defense Minister Wanquan criticized Japan’s government for “trying to stir up troubles and violating China’s rights.” He also criticized the Philippines for its dispute with China over the Spratly Islands in the South China Sea.
“China has indisputable sovereignty over” the disputed islands in the South China and East China Seas and adjacent waters, Chang said.
“[The] territorial sovereignty issue is China’s core interest,” he said. “On this issue, we will make no compromise, no concession, no trading, not even a tiny bit of violation is allowed.”
Asked about comments by U.S. Navy Capt. James Fanell last month that Chinese military exercises indicated China is preparing for a “short, sharp war” against Japan, Chang denied the exercises were preparation for a conflict.
The exercises were not directed against any country or region, he said, “so this is only a presupposition, so your question does not exist.”
“It is Japan who has been making provocative [moves] against China, and China has been exercising restraint to the maximum,” Chang said.
During an earlier portion of the trip, Hagel visited Japan and announced the Pentagon is adding two missile defense warships to its arsenal in Asia.
Hagel travels to Mongolia before returning to the United States on Thursday.
This entry was posted in National Security and tagged China, Chuck Hagel. Bookmark the permalink.