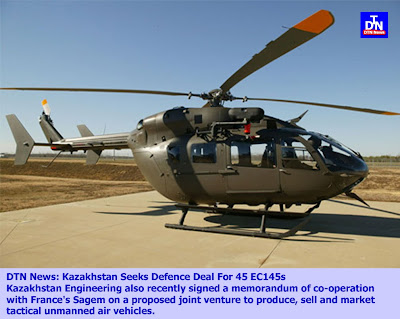 Eurocopter says the nation should take delivery of the new aircraft within a six-year period under the proposed deal, which was signed by Kazakh president Nursultan Abishuly Nazarbayev during his visit to France in late October.

A related agreement calls for the establishment of a new joint venture with local company Kazakhstan Engineering, which will complete the newly designated KH145s in Astana. It should deliver the first batch of six aircraft in late 2011, Eurocopter says, with the co-production pact expected to become operational next month. "The agreement also includes the development of local maintenance and training activities," the company adds.

Eurocopter chief executive Lutz Bertling says the arrangement will create "several hundreds of highly qualified jobs" and also "foster helicopter usage in Kazakhstan". He also believes the new joint venture will be able to compete for additional business in Belarus, Russia and central Asia, with other applications including parapublic operations and supporting the oil and gas sector.

Sales of the EC145 have now topped 400 aircraft, Eurocopter says. This includes the UH-72A Lakota variant being delivered to the US Army by American Eurocopter under the service's light utility helicopter programme. The company has so far handed over its 114 of the aircraft, says Flightglobal's HeliCAS database.

Source: DTN News - - This article compiled by Roger Smith from reliable sources by Stephen Trimble - Flight International
(NSI News Source Info) HONG KONG - November 11, 2010: A subset of the US Navy's Lockheed Martin P-3C Orion fleet is being upgraded to remain airworthy for at least a decade beyond its scheduled replacement by the Boeing 737-based P-8A Poseidon. 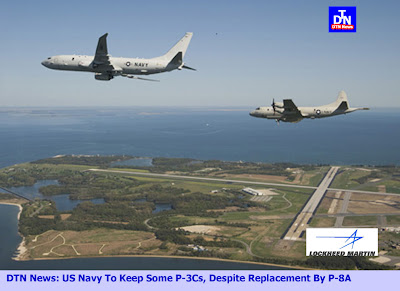 In addition to fleet-wide fatigue repairs, the navy is investing to replace the outer wing assemblies on at least 29 P-3Cs. The first 17 have already been ordered, with the service currently soliciting vendors for another 12, plus options for two more.

Lockheed, the P-3C manufacturer and outer-wing replacement contractor, believes the USN will buy even more assemblies and keep substantial numbers of Orions flying beyond the type's scheduled retirement date.

"There's going to be a subset of P-3s that the new platform at this point is not scheduled to take over," says Mark Jarvis, Lockheed's director of P-3 design and production. "We still think, if you look at their special mission airplanes, there is a universe of anywhere between 40 to 60 possible re-wing candidates."

Rondeau acknowledges that the current requirement has declined from an original figure of 54 cited in 2007. This was reduced after the navy determined that about 25 wings were repairable as their damage had been caused by corrosion and not fatigue.

The USN agrees that the re-winged subset of its P-3C fleet will be maintained beyond the bulk of the Orion fleet's 2019 retirement date to perform special missions. This includes its 16 EP-3E Aries II electronic intelligence aircraft. The navy has installed Raytheon's littoral surveillance radar system on at least seven P-3Cs, providing a capability similar to the US Air Force's Northrop Grumman E-8C JSTARS.

Navy officials earlier this year cancelled the service's EPX programme, which would have replaced its EP-3s. Funding and requirements for a new programme are currently being determined. 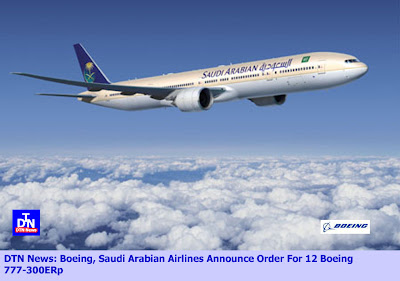 This order previously was attributed to an unidentified customer on Boeing's orders and deliveries website. The order is valued at $3.3 billion at average list prices.

“Our decision to order the 777-300ER is part of a long-term growth strategy to expand and modernize our fleet with newer, more fuel-efficient airplanes, and is based on the airplane’s proven efficiencies,” said H.E. Eng. Khaled Al-Mulhim, director general of Saudi Arabian Airlines.

“We see direct benefit because of the 777-300ER’s improved fuel efficiency, seat-mile costs and the economics of operating a twin-engine airplane over long distances.”

Saudi Arabian Airlines took delivery of its first Boeing 777, a 777-200ER, in December 1997 and since then has deployed the 777 on a number of short-, medium- and long-haul routes.

Pictured here is a 777-300ER in Saudi Arabian Airlines livery. 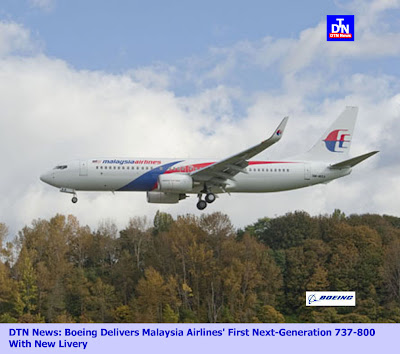 The national carrier of Malaysia is the first full-service airline to operate the 737-800 with the new Boeing Sky Interior.

The new 737 Boeing Sky Interior features sculpted sidewalls and window reveals, and new, larger stow bins that accommodate more bags while taking up less space in the cabin. Attendants can select from different LED lighting schemes from soft blue overhead sky simulation to a calm, relaxing, pallet of sunset colors. To date, 50 customers have ordered the new interior for 1,386 airplanes. 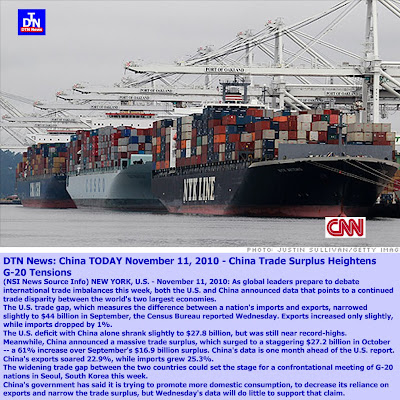 The U.S. trade gap, which measures the difference between a nation's imports and exports, narrowed slightly to $44 billion in September, the Census Bureau reported Wednesday. Exports increased only slightly, while imports dropped by 1%.

The U.S. deficit with China alone shrank slightly to $27.8 billion, but was still near record-highs. Meanwhile, China announced a massive trade surplus, which surged to a staggering $27.2 billion in October -- a 61% increase over September's $16.9 billion surplus. China's data is one month ahead of the U.S. report. China's exports soared 22.9%, while imports grew 25.3%.

The widening trade gap between the two countries could set the stage for a confrontational meeting of G-20 nations in Seoul, South Korea this week.

China's government has said it is trying to promote more domestic consumption, to decrease its reliance on exports and narrow the trade surplus, but Wednesday's data will do little to support that claim.

"China's delegation to this week's G-20 summit will have a hard job convincing others that China's government is doing all it can to stimulate domestic spending," Mark Williams, senior China economist at Capital Economics wrote in a note to clients. China's trade surplus with the U.S. is among the most glaring, according to Williams. In the last month, China shipped $25 billion in goods to the U.S. and bought only $7 billion in return, he said.

The United States has accused China of keeping its currency, the yuan, undervalued by buying up large reserves of foreign currencies. A cheaper yuan gives an advantage to Chinese exporters by allowing them to undercut foreign competitors.

In September, the House passed a bill that would allow for tariffs on Chinese goods. Before the bill becomes law, it must pass the Senate and be signed by President Obama.

Since then, Treasury Secretary Timothy Geithner has been urging G-20 nations to take strong action against currency manipulation, and change economic policies in countries running large trade surpluses to reduce dependence on exports.

At a meeting of finance ministers of the G-20 group of nations in Gyeongju, South Korea, last month, the ministers pledged not to engage in currency wars, but stopped short of an outright ban on currency manipulation.

In the G-20 finance ministers' closing statement, they said they would "move towards more market determined exchange rate systems that reflect underlying economic fundamentals and refrain from competitive devaluation of currencies."

The ministers added that the G-20 member nations would "continue to resist all forms of protectionist measures and seek to make significant progress to further reduce barriers to trade."

Last week, the U.S. Federal Reserve announced it would pump another $600 billion into the U.S. economy through the purchase of long-term Treasuries, a move known as quantitative easing.

But the move has drawn harsh criticism from leaders who are concerned it will devalue the dollar, and stoked fears of a "currency war" in which nations deliberately devalue their own currencies to keep their own exports competitive in the global marketplace.

On Tuesday, a Chinese rating agency downgraded its rating on the United States, warning that the Federal Reserve's bond-buying spree could trigger a creditor crisis.

China also announced on Wednesday, that it would raise the reserve requirement ratio on major banks by half a percentage point, in an attempt to control the flow of new money.

CNN's Helena Hong and Annalyn Censky contributed to this report