DTN News -OSAMA BIN LADEN NEWS / PAKISTAN NEWS: Pakistan Taliban Strikes To Avenge Osama bin Laden Death
**The Pakistani Taliban struck to avenge the death of Osama bin Laden by carrying out a double suicide bombing that killed at least 80 recruits at a military training centre in the north-west of the country.

By Rob Crilly, Islamabad and Ashfaq Yusufzai in Shabqadar- The Telegraph 6:00PM BST 13 May 2011
(NSI News Source Info) TORONTO, Canada / Islamabad, Pakistan - May 13, 2011: Pakistan has been braced for deadly reprisals ever since US Navy Seals shot dead the al-Qaeda leader on May 2. 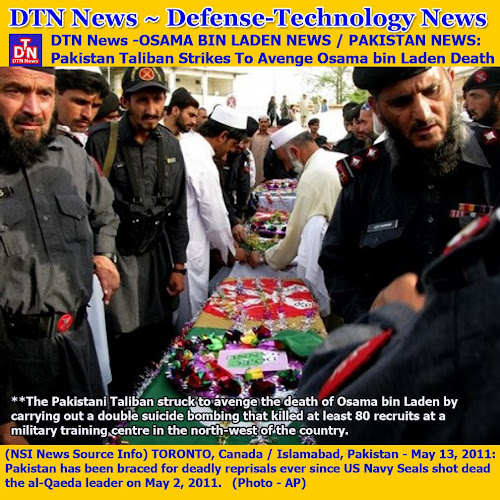 Relations between Islamabad and its western allies have been strained after it emerged bin Laden managed to live for five years under the noses of the Pakistani military in the garrison town of Abbottabad.

The suicide bombers struck at the gates killing the mostly young recruits.

Witnesses said the recruits were waiting to board buses to begin their leave after completing their training when two bombers on motorbikes detonated their explosives shortly before 6am in Shabqadar.

"We have carried out the attack to take revenge of Osama's death and will continue targeting military personnel as they are defending the US," Ihsanullah Ihsan, a spokesman for the Tehrik-i-Taliban Pakistan said.

Another 140 people were wounded, 40 of them seriously, according to police officers, in the attack on the Frontier Constabulary base – the bloodiest this year.

"These attacks were cowardly and indiscriminate, killing many innocent bystanders and targeting those who serve to protect Pakistan," he said.

"They prove once again that such extremist groups have no regard for the value of human life." The site of the attack was a scene of devastation. More than a dozen buses were destroyed in the blasts.

Charred remains were left on the ground where the recruits had fallen.

"It was around 5:55am when we saw two persons riding on motorcycles and then massive blasts that shattered the nearby shops," said Haji Ghufran, a tea-maker in the bazaar that runs beside the training centre.

"There was blood and human flesh all around."

The Frontier Constabulary is a paramilitary police force that polices the porous border with Afghanistan.

Its members are drawn largely from the Pashtun community, the same ethnic group who form the bedrock of Taliban support, in the hope that their local knowledge can be turned against the fundamentalist militia.

Hours after the bombing, a US drone aircraft fired missiles at a vehicle in the North Waziristan region on the Afghan border, killing five militants, according to Pakistani security officials.

Yesterday's attack is also a reminder of the high price paid by Pakistan at the hands of extremists. Officials estimate that more than 30,000 people have been killed by terrorists since September 11.

However, one of bin Laden's wives has told interrogators that the al-Qaeda leader lived in Pakistan for the past seven years, deeply embarrassing the Pakistan government.

Pakistan's civilian government said on Thursday it would review counter-terrorism co-operation with the United States as it comes under growing domestic pressure to punish Washington for the apparently unauthorised raid – stoking anti-Western sentiment.

It emerged that a senior military officer cancelled a trip to the US in the latest sign of escalating tensions.

General Khalid Shameem Wynne, chairman of the joint chiefs of staff to the Americans he would withdraw from next week's visit "in view of the prevailing environment", said a senior official.