CONTRACTS
DEFENSE LOGISTICS AGENCY
Henry Schein Inc., Melville, N.Y., has been awarded an estimated $25,328,219 fixed-price with an economic-price-adjustment modification (P00009) to contract (SPM2DE-09-D7444) for the distribution of a wide range of general dental supplies to all contiguous United States and outside contiguous United States facilities that participate in the Dental Electronic Catalog (ECAT) program. This award exercises option-period four with a July 15, 2014 performance completion date. The award was competed on the DLA Internet Bid Board system and there were 10 responses received. Using military services are Army, Navy, Air Force, Marine Corps and federal civilian agencies. Type of appropriation is fiscal 2014 defense working capital funds. The contracting activity is Defense Logistics Agency Troop Support, Philadelphia, Pa.

NAVY
The Whiting-Turner Contracting Co., Greenbelt, Md., is being awarded $38,635,704 for firm-fixed-price task order #0008 under a previously awarded multiple award construction contract (N40085-10-D-5330) for energy efficiency improvements at Marine Corps Base, Camp Lejeune. The work to be performed provides for replacement of a central steam system which will entail the removal of steam equipment at each facility and the installation of high efficiency systems such as natural gas fired hot water appliances, high efficiency heat pumps and hot water equipment to meet heating load requirements. Work will be performed in Jacksonville, N.C., and is expected to be completed by December 2015. Fiscal 2013 operation and maintenance, Marine Corps funds in the amount of $38,635,704 are being obligated on this award and will expire at the end of the current fiscal year. Four proposals were received for this task order. The Naval Facilities Engineering Command, Mid-Atlantic, Norfolk, Va., is the contracting activity.

Tutor Perini Corp., Sylmar, Calif., is being awarded $23,813,707 for firm-fixed-price task order #JQ02 under a previously awarded multiple award construction contract (N62742-10-D-1312) for whole house revitalization work at Lockwood Terrace on Naval Base Guam. The work to be performed provides for the upgrade of 60 existing housing units in order to bring them to current Navy standards which include reconfiguration of interior living spaces and expanding existing living areas. Work will be performed in Santa Rita, Guam, and is expected to be completed by September 2015. Fiscal 2009, fiscal 2012, and fiscal 2013 family housing improvements, Navy (military construction) contract funds in the amount of $23,813,707 are being obligated on this award and will not expire at the end of the current fiscal year. Five proposals were received for this task order. The Naval Facilities Engineering Command, Marianas, Guam, is the contracting activity.

International Marine and Industrial Applicators LLC*, Saint Augustine, Fla., is being awarded a $15,181,444 modification to previously awarded indefinite-delivery/indefinite-quantity contract (N4523A-12-D-0003) to definitize a delivery order for preservation work on the USS John C. Stennis (CVN 74). This delivery order was awarded under an existing five-year contract for planning and execution of preservation work for aircraft carriers, submarines and surface ships. The USS John C. Stennis will be undergoing a docking planned incremental availability which is the opportunity in the ship’s life cycle to conduct maintenance to systems and hull not available when the ship is waterborne. This modification will bring the total cumulative value to $27,181,444. Work will be performed in Bremerton, Wash., and is expected to be completed by August 2014. Fiscal 2013 operations and maintenance, Navy funding in the amount of $15,181,444 will be obligated at the time of award and will expire at the end of the current fiscal year. Puget Sound Naval Shipyard and Intermediate Maintenance Facility, Bremerton, Wash., is the contracting activity.

Lockheed Martin Corp., Missiles and Fire Control - Technical Services, Orlando, Fla., is being awarded a $12,598,136 cost-plus-fixed-fee contract for design agent engineering services. This contract includes options which, if exercised, would bring the cumulative value of this contract to $38,574,075. This contract combines purchases for the U.S. Navy (80.4 percent), Spain (6.7 percent), Germany (4.9 percent), Norway (1.9 percent), Japan (3.9 percent), and Australia (2.2 percent). Work will be performed at various shipyards (based on ship availabilities) both inside and outside the United States (70 percent), onboard ships at sea (25 percent), and Port Hueneme, Calif. (5 percent), and is expected to be completed by September 2014. Fiscal 2013 operations and maintenance, Navy contract funds in the amount of $1,300,000 will be obligated at time of award and will expire at the end of the current fiscal year. This contract was not competitively procured in accordance with the statutory authority of 10 U.S.C. 2304(c)(1) as implemented by FAR 6.302-1, only one responsible source and no other supplies or services will satisfy agency requirements. The Port Hueneme Division, Naval Surface Warfare Center, Port Hueneme, Calif. is the contracting activity (N63394-13-C-1307).

Northrop Grumman Corp., Electronic Systems, Linthicum Heights, Md., is being awarded a $10,761,825 modification (P00115) under a previously awarded cost-plus-fixed-fee contract (M67854-07-C-2072) to increase the estimated cost ceiling by $10,761,825 for the ground/air task-oriented radar (G/ATOR) engineering and manufacturing development phase and associated other direct costs to account for the G/ATOR gallium nitride transition. Work will be performed in Linthicum Heights, Md., and is expected to be completed by Dec. 31, 2014. Fiscal 2013 research and development funds in the amount of $10,761,825 will be obligated at the time of award and will not expire at the end of the current fiscal year. This contract modification was not competitively procured, as the contract effort is within the scope of the current contract and is entered into pursuant to the changes clause. The Marine Corps Systems Command, Quantico, Va., is the contracting activity.

MOOG Inc., Aurora, N.Y., is being awarded $9,920,000 for firm-fixed-price delivery order #7084 against previously issued basic ordering agreement (N00383-09-G-002D) for the repair of 155 Swashplate actuators in support of the V-22 aircraft. Work will be performed at Aurora, N.Y., and is expected to be completed by July 11, 2014. Fiscal 2013 Navy working capital funds will be obligated at the time of award, and will not expire at the end of the current fiscal year. This was a non competitive requirement in accordance with FAR 6.302-1. NAVSUP Weapon Systems Support, Philadelphia, Pa., is the contracting activity (N00383-09-G-002D).

General Dynamics Armament and Technical Products, Williston, Vt., was awarded an $18,716,689 firm-fixed-price, option-eligible, multi-year contract modification (P00147) of contract (W31P4Q-10-C-0190) in exercise of its option to reduce hardware unit price for the Hydra rockets, motors and practice warheads in accordance with contract terms and conditions in support of the Army, Navy, Air Force and foreign military sales. Performance location will be Williston, Vt., and Camden, Ark., with funding from fiscal, 2012, 2013 and 2014 other authorizations funds. This contract was solicited via the web with one bid received. The U.S. Army Contracting Command - Redstone Arsenal (Missile), Redstone Arsenal, Ala., is the contracting activity.

Wiley & Wilson Inc., Alexandria, Va., was awarded a $12,000,000 firm-fixed-price, non-option eligible, non-multi-year contract for multi-discipline architectural engineering services for secure projects supported by the real property services field office. Performance location and funding will be determined with each order. This contract was a non-competitive acquisition with one bid solicited and one received. The U.S. Army Corps of Engineers - Baltimore District, Baltimore, Md., is the contracting activity (W912DR-13-D-0026).

Facility Defense Consultants and Hanke Constructors*, Wentzville, Mo., was awarded a $7,630,698 firm-fixed-price, non-option eligible, non-multi-year contract for a general construction mental health building for expansion of services at the Marion, Ill., Veterans Association medical center. Performance location will be Marion, Ill., with fiscal 2013 other authorizations funding. This contract was a competitive acquisition via the web with four bids received. The U.S. Army Corps of Engineers - St. Louis District, St. Louis, Mo., is the contracting activity (W912P9-13-C-0410).

IBIS TEK LLC*, Butler, Pa., was awarded a $7,493,288 firm-fixed-price, option eligible, non-multi-year contract for long-term armor solution B-kits for the family of medium tactical vehicles. Performance locations will be Butler, Pa., with funding from fiscal 2013 other procurement authorization funds. This contract was a competitive acquisition via the web with seven bids received. The U.S. Army Contracting Command - Tank and Automotive (Warren), Warren, Mich. is the contracting activity (W56HZV-13-C-0036).

AIR FORCE
Georgia Tech Applied Research Corp., Atlanta, Ga., has been awarded a $7,956,371 delivery order (HC1047-05-D-4000-0244) for Army electronic protection to analyze the response of Army systems to advanced jamming and develop mitigation techniques and methods against this jamming. Work will be performed at Atlanta, Ga., and is expected to be completed by November 10, 2015. Fiscal 2013 research and development funds in the amount of $623,700 will be obligated at time of award. Enterprise Sourcing Group/PKS, Offutt Air Force Base, Neb., is the contracting activity.

Source: K. V. Seth - DTN News & Reuters
(NSI News Source Info) TORONTO, Canada - September 11, 2013:  US President Barack Obama temporarily set aside his Syrian agenda to lead the US in a moment of silence to observe the 12th anniversary of 9/11, the worst terrorist attack on American soil.

Families and friends of victims are also gathering near Ground Zero to remember those who died .

The US has heightened security of facilities abroad for the anniversary, the White House said citing the attack that killed four US government employees in Benghazi, Libya, last year.

Mr Obama, joined by first lady Michelle Obama and vice president Joe Biden and his wife Jill gathered on the South Lawn of the White House, where flags were at half-staff.

They stood silent at 8.45am (1.45pm Irish time), the time on September 11th 2001, when a hijacked American Airlines Flight 11 smashed into the north Tower of the World Trade Center in New York City. Almost 3,000 people died in the terrorist attacks.

“On September 11, 2001, no matter where we came from, what God we prayed to, or what race or ethnicity we were, we were united as one American family,” Mr Obama said in a proclamation issued yesterday. “May the same be said of us today, and always.”

The proclamation declared today as Patriot Day and a National Day of Service. US flags were to be lowered to half- staff, and the president called on the nation to observe a moment of silence at 8.46am and mark the day with appropriate ceremonies and activities. 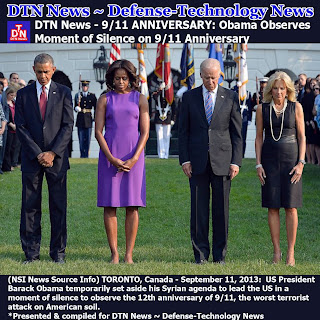 The president was scheduled to participate in a separate ceremony later today at the Pentagon, which was hit by American Airlines Flight 77, the jet hijacked and turned into a weapon killing 59 passengers and crew and 125 people on the ground.

Mr Obama also planned to participate in a service project in the afternoon in the Washington DC area.

The Obama administration said in a statement that it has taken several steps to prevent another 9/11-style attack in the US.

Mr Obama’s counterterrorism aide Lisa Monaco has been in charge of reviewing security measures in place for the anniversary, the White House said.

Four Americans including the US ambassador to Libya were killed in an attack on a compound in Benghazi a year ago. The administration initially said the assault grew out of anti-Western protests. Later, however, it turned out that Islamist extremists launched the attack on the September 11th anniversary.


The administration was forced for months to defend its handling of the events at Benghazi, with critics charging officials deliberately played down the nature of the attack to protect the president’s re-election bid. The White House said its first reports were based on incomplete information. “The events of last year, losing four brave Americans - Chris Stevens, Sean Smith, Glen Doherty and Tyrone Woods - brought home the reality of the challenges we face in the world,” the White House said.