The Philippines accused China on Wednesday of flaring tensions anew by sending more government and fishing vessels to Scarborough (Panatag) Shoal despite ongoing talks to resolve the two-month-old standoff. 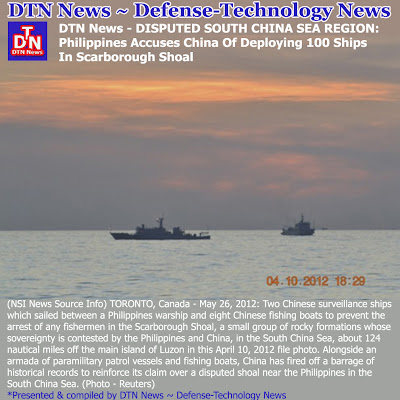 Department of Foreign Affairs (DFA) spokesperson Raul Hernandez said the number of Chinese vessels at Scarborough Shoal increased to 92 from 77 on Tuesday. They included four government ships and fishing and utility boats.
Hernandez said the Philippines had only two vessels in the area, which both countries claim.
Hernandez said the DFA handed Chinese Ambassador Ma Keqing a diplomatic note on Monday to protest the presence on that day of 77 Chinese vessels-five government ships, 16 fishing boats and 56 dinghies used to load fish or corals.
A Chinese foreign ministry spokesperson, Hong Lei, on Wednesday said that nearly 100 Chinese boats or dinghies arrived at the shoal.
"The Philippine side has recently taken some provocative actions in the Huangyan Island waters, thus the Chinese side has adopted corresponding measures to strengthen management and control," Hong said, using China's name for Scarborough Shoal.
"To our knowledge, now there are about 20 Chinese fishing boats working in that area. This number is roughly the same with that in the same period of the previous years," Hong said.
"The way these fishing boats are working complies with the related Chinese laws and the fishing moratorium issued by the Chinese government," he added.
Hernandez said that despite China's fishing ban, Chinese vessels were observed fishing and collecting protected corals at the shoal.
The Philippines has separately imposed its own ban on fishing in the area.
Seventh protest
Hernandez said the Philippines had filed a seventh diplomatic protest because of China's sending more vessels to the shoal despite ongoing talks to resolve the dispute.
He said that at around 7 p.m. on Monday, there were five Chinese government vessels (CMS 71, CMS 84, FLEC 301, 303 and 310) in the area, which were accompanied by 16 fishing boats (10 inside the lagoon and six outside), and 56 utility boats (27 inside the lagoon and 29 outside).
"Yesterday (Tuesday), there were still 16 Chinese fishing vessels and the number of utility boats went up to 76," Hernandez said
He explained that utility boats were dinghies that helped the fishing boats collect their harvest of giant clams and corals by dredging.
Pullout demanded
Manila demanded an immediate pullout of the vessels, saying they violate Philippine sovereignty and a nonbinding Declaration of Conduct on the South China Sea signed by China and Southeast Asian Countries.
"It is regrettable that these actions occurred at a time when China has been articulating for a deescalation of tensions and while the two sides have been discussing how to defuse the situation in the area," Hernandez added.
Both sides claim the uninhabited, horseshoe-shaped shoal, which is 230 kilometers (124 nautical miles) from Zambales province, the nearest Philippine coast.
Hernandez said the Philippines remained committed to defusing the tensions in the area.
He said Assistant Foreign Secretary for Asia-Pacific Affairs Teresa Lazaro and Ambassador Ma were discussing the dispute in Manila while similar talks were going on in Beijing.
The Philippines is also taking the dispute to the International Tribunal on the Law of the Sea (Itlos), but China rejects international arbitration. 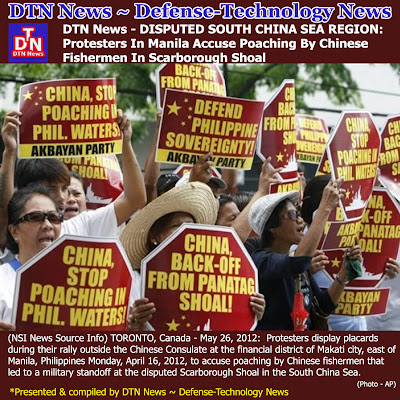 China also opposes the intervention of other countries in its territorial dispute with the Philippines.
"The Philippines' attempt to draw any third party into interfering or intervening through whatever means in the incident is bound to further escalate the situation or even change the nature of the issue and will meet steadfast opposition from the Chinese side," Hong said.
Hong was referring to Foreign Secretary Albert del Rosario's earlier statement that some countries were helping the Philippines establish a "minimum credible defense posture" by providing the country with patrol boats and military aircraft to complement its diplomatic initiative in dealing with China.
According to Hong, "the Chinese side has been actively engaged in diplomatic consultation to urge the Philippine side to correct its wrongdoing and ease the situation, for the sake of normal growth of bilateral relations."
"China's principles and stance over the Huangyan Island issue are clear-cut," Hong said. "Huangyan Island has always been China's territory, and China possesses indisputable sovereignty over the island. The Philippine side should concretely respect China's territorial sovereignty. At the same time, China's position of committing to diplomatic consultation to address the current situation remains unchanged."
Hernandez said "the plan [to establish a minimum credible defense posture] has been there for a long time."
"We have to substantiate our diplomatic capacity with a minimum credible defense posture … that is what we're doing. We are trying to upgrade or modernize our military which has been neglected for several years," Hernandez said.
Help from Japan, Korea
Del Rosario earlier said that Japan would likely provide the country with 10 40-meter patrol boats under its official development aid and two larger ones as grants.
He said South Korea had provided the Armed Forces of the Philippines equipment, such as vests and helmets, under a logistics agreement. "I understand our defense department is looking to possibly purchase aircraft from there," Del Rosario said.
In November last year, President Benigno Aquino III asked visiting South Korean President Lee Myung-bak for aircraft, patrol boats and other hardware to help boost the Philippines' military capability amid tensions with China on the Spratly islands in the West Philippine Sea (South China Sea).
Lee's response was not disclosed, but he said Seoul wanted to help Manila resolve its maritime problems.
Del Rosario said the Philippines could expect to receive from Australia "a number of vessels for search and rescue, as well as significant training here and abroad for large numbers of our military" when a status of visiting forces agreement between the two countries is ratified this week.
Earlier, the military announced it would be getting a second Hamilton-class cutter from the United States.
Del Rosario has repeatedly said the country was determined to "improve our national defense by building a minimum credible defense posture."
He said that this year, the Philippines would receive S$160 million (about P6.25 billion) in defense assistance from the United States.
He also said he had secured US funding for a S$70-million (about P2.3 billion) radar system for the Philippine Coast Guard.
The Chinese Embassy in Manila admitted that the People's Liberation Army recently conducted a "regular training program" in the "West Pacific waters."
Citing the Information Office of China's Ministry of Defense, the embassy said, "The recent drill by a naval fleet of China's People's Liberation Army in the West Pacific waters is a regular training program included in its annual plan, not aimed at any particular country or target."
Related News;
*Link for This article compiled by Roger Smith from reliable sources Guardian UK*Speaking Image - Creation of DTN News ~ Defense Technology News *This article is being posted from Toronto, Canada By DTN News ~ Defense-Technology News Contact:dtnnews@ymail.com ©COPYRIGHT (C) DTN NEWS DEFENSE-TECHNOLOGY NEWS 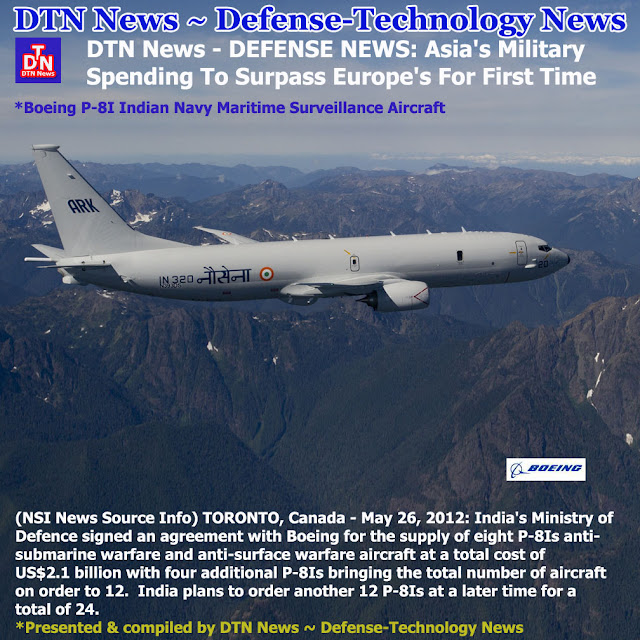