The Boeing Co., St. Louis, Mo., is being awarded a $12,592,123 cost-plus-fixed-fee order against a previously issued basic ordering agreement (N00019-11-G-0001) for non-recurring engineering associated with Engineering Change Proposal 6381 for the F/A-18 and EA-18G AN/APG-79 Active Electronically Scanned Array Radio Detection and Ranging General Purpose Processor 3. In addition, this order provides for the procurement of 12 engineering development modules. Work will be performed in El Segundo, Calif. (65 percent); Forest, Miss. (20 percent); and St. Louis, Mo. (15 percent). Work is expected to be completed in January 2012. Contract funds will not expire at the end of the current fiscal year. The Naval Air Systems Command, Patuxent River, Md., is the contracting activity.

Rolls-Royce Engine Services-Oakland, Inc., Oakland, Calif., is being awarded a $6,867,154 modification to a previously awarded indefinite-delivery/indefinite-quantity contract (N00019-09-D-0006) for the repair of up to 10 T56-A-427 Series IV engines for the E-2C and C-2 aircraft. Work will be performed in Oakland, Calif., and is expected to be completed in August 2011. Contract funds will not expire at the end of the current fiscal year. The Naval Air Systems Command, Patuxent River, Md., is the contracting activity.

WASHINGTON, - May 2, 2011: Osama bin Laden received a Muslim ceremony as he was buried at sea, a senior defense official said here today. 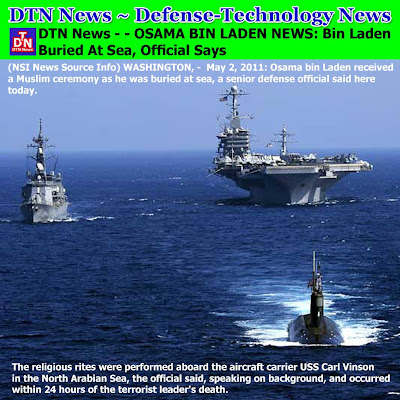 The religious rites were performed aboard the aircraft carrier USS Carl Vinson in the North Arabian Sea, the official said, speaking on background, and occurred within 24 hours of the terrorist leader's death.

"Preparations for at-sea [burial] began at 1:10 a.m. Eastern Standard Time and were completed at 2 a.m.," the official said.

The burial followed traditional Muslim burial customs, the official said, and bin Laden's body was washed and placed in a white sheet.

"The body was placed in a weighted bag. A military officer read prepared religious remarks, which were translated into Arabic by a native speaker," the official added.

Afterward, Bin Laden's body was placed onto a flat board, which was then elevated upward on one side and the body slid off into the sea.

The deceased terrorist was buried at sea because no country would accept bin Laden's remains, a senior defense official said.

CIA and Defense Department officials are sure it was the body of bin Laden. CIA specialists compared photos of the body with known photos of bin Laden and said with 95-percent certainty it was the terrorist leader, a senior intelligence official said.

In addition, the intelligence official said, bin Laden's wife identified the al-Qaida leader by name while the strike team was still in the compound.

CIA and other specialists in the intelligence community "performed the initial DNA analysis matching a virtually 100-percent DNA match of the body against the DNA of several of bin Laden's family members," the official added.

The United States has killed al Qaeda leader Osama bin Laden and recovered his body, according to numerous media reports May 1 citing U.S. officials. U.S. President Barack Obama is scheduled to make an announcement on the subject. It is not clear precisely how bin Laden was killed or how his body was recovered, but the assertion that he is dead is significant. 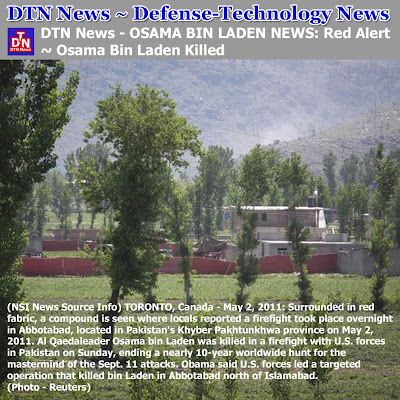 Bin Laden had become the symbol of al Qaeda, even though the degree to which he commanded the organization was questionable. The symbolic value of his death is obvious. The United States can claim a great victory. Al Qaeda can proclaim his martyrdom.

It is difficult to understand what this means at this moment, but it permits the Obama administration to claim victory, at least partially, over al Qaeda. It also opens the door for the beginning of a withdrawal from Afghanistan, regardless of the practical impact of bin Laden’s death. The mission in Afghanistan was to defeat al Qaeda, and with his death, a plausible claim can be made that the mission is complete. Again speculatively, it will be interesting to see how this affects U.S. strategy there. 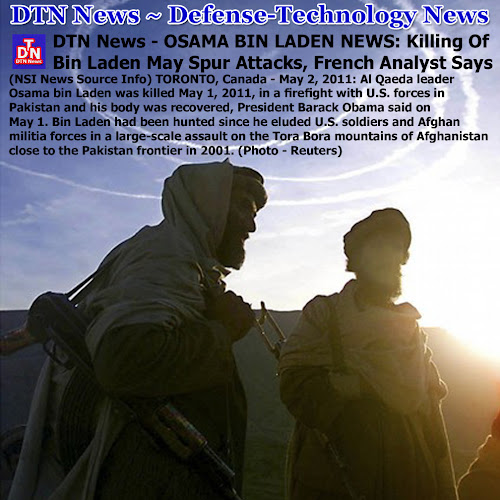 “It doesn’t change much on the ground, even if it has a symbolic importance,” Giudicelli said in a telephone interview. “There has been such a process of decentralization within the movement that operations are now all local.”

“Osama bin Laden was at the head of an ideological movement, but he no longer had the central role in planning operations that he had until 2001. Groups like al-Qaeda in the Maghreb and in Yemen have lost a spiritual father, but their actions go on independently,” Giudicelli said. “This death may even give them new impetus and new justifications to carry out attacks.”

Bin Laden, the mastermind of the Sept. 11, 2001, terror attacks on the U.S., was killed yesterday by U.S. special forces in Pakistan.

To contact the reporter on this story: Gregory Viscusi in Paris at gviscusi@bloomberg.net.

To contact the editor responsible for this story: James Hertling at jhertling@bloomberg.net