Egyptian police have fired rubber bullets and tear gas at protesters outside the Israeli embassy in Cairo, after a group of demonstrators reportedly attempted to storm the building. 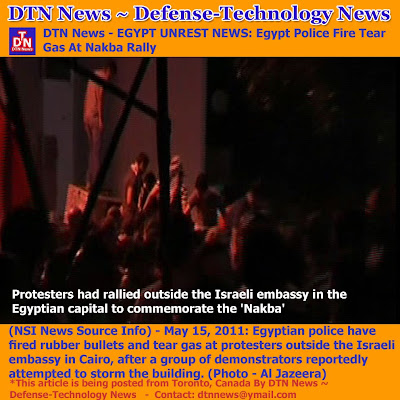 Thousands of protesters had massed outside of Egypt police fire tear gas at Nakba rally the embassy in the capital on Sunday to commemorate the 63rd anniversary of the "Nakba" or "catastrophe" - the day Israel declared its independence and hundreds of thousands of Palestinians fled or were expelled from their homes.

Witnesses said a group of demonstrators later tried to storm the entrance of the embassy. Police used rubber coated steel bullets and tear gas to disperse the crowd, wounding at least 40 people. Several people were arrested.

Al Jazeera's Rob Gilles, who was at the scene, said that some protesters responded by burning tires in the middle of the road and throwing stones.

"The security forces have made a charge outside the embassy to clear the street in front of it and most of the protesters are being forced back," he said.

"They've sealed off the main area into it but there is still a determined presence here, they are determined not to move, spurred on by the images they've seen of the Nakba protests in other parts of the Middle East.

"We've seen a few people laid out on the floor mainly suffering from gas inhalation more than anything else."

Activists had earlier called for marches to start on Sunday to reach the Rafah border crossing between Israel and Egypt.

The incident followed the visit to Egypt by a senior Israeli defence ministry official - the first trip by a top Israeli official since a popular uprising toppled former president Hosni Mubarak in February.

Amos Gilad was to hold talks with several Egyptian officials "to discuss the latest developments in the region, in light of the Palestinian reconciliation agreement", MENA, Egypt's state news agency reported on Sunday.

The long-awaited accord, inked by the two rivals among 13 factions, aims to put a stop to the animosity which has split the Palestinian territories into opposing camps since 2007.

The agreement envisages Hamas and Fatah working to put together an interim government of candidates who are unaffiliated with either faction, who would govern until presidential and legislative elections within a year.

Hours after its chief, Dominique Strauss-Kahn, was arrested in connection with the alleged sexual attack of a maid at a Midtown Manhattan hotel, the International Monetary Fund on Sunday named John Lipsky as acting managing director.

Mr. Lipsky, the I.M.F.’s first deputy managing director, is a former U.S. Treasury executive and onetime banker at JP Morgan. William Murray, an I.M.F. spokesman, said that Mr. Lipsky, who has been overseeing the logistics of the bailout of the Greek economy, would meet with members of the I.M.F. board in Washington later in the day, according to Reuters. 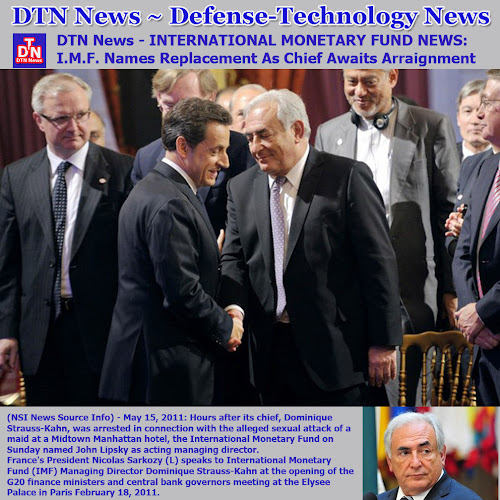 “In line with standard I.M.F. procedures, John Lipsky, first deputy managing director, is acting managing director while the M.D. is not in D.C.,” Mr. Murray said in a statement. “Mr. Lipsky will chair the informal Board session today.”

Mr. Strauss-Kahn, 62, was awaiting arraignment on Sunday afternoon in Manhattan. The New York Police Department formallly arrested him at 2:15 that morning “on charges of criminal sexual act, attempted rape, and an unlawful imprisonment in connection with a sexual assault on a 32-year-old chambermaid in the luxury suite of a Midtown Manhattan hotel yesterday” about 1 p.m., Deputy Commissioner Paul J. Browne, the department’s chief spokesman, said.

Reached by telephone, Benjamin Brafman, a lawyer, said he would be representing Mr. Strauss-Kahn with William Taylor, a lawyer in Washington.

“We have not yet been able to meet with our client and we may have more to say tomorrow,” said Mr. Brafman, who said he had been contacted late Saturday night. He said Mr. Strauss-Kahn was being housed at the police department’s Special Victims Unit.

Early Sunday morning, Mr. Brafman said that his client “will plead not guilty.”

Mr. Stauss-Kahn was widely expected to become the Socialist candidate for the French presidency, was apprehended by detectives of the Port Authority of New York and New Jersey in the first-class section of the jetliner, and immediately turned over to detectives from the Midtown South Precinct, officials said.

Mr. Strauss-Kahn, a former French finance minister, had been expected to declare his candidacy soon, after three and a half years as the leader of the fund, which is based in Washington. He was considered by many to have done a good job in a period of intense global economic strain, when the institution itself had become vital to the smooth running of the world and the European economy.

His apprehension came at about 4:40 p.m. at Kennedy Airport, when two detectives of the Port Authority suddenly boarded Air France Flight 23, as the plane idled at the departure gate, said John P. L. Kelly, a spokesman for the agency.

“It was 10 minutes before its scheduled departure,” Mr. Kelly said. “They were just about to close the doors.”

Mr. Kelly said that Mr. Strauss-Kahn was traveling alone and that he was not handcuffed during the apprehension.

“He complied with the detectives’ directions,” Mr. Kelly said.

The Port Authority officers were acting on information from the Police Department, whose detectives had been investigating the assault of a female employee of Sofitel New York, at 45 West 44th Street, near Times Square. Working quickly, the city detectives learned he had boarded a flight at Kennedy Airport to leave the country.

Though Mr. Strauss-Kahn received generally high marks for his stewardship of the fund, his reputation was tarnished in 2008 by an affair with a Hungarian economist who was a subordinate there. The fund decided to stand by him despite concluding that he had shown poor judgment in the affair. Mr. Strauss-Kahn issued an apology to I.M.F. employees and to his wife, Anne Sinclair, an American-born French journalist.

In his statement then, Mr. Strauss-Kahn said, “I am grateful that the board has confirmed that there was no abuse of authority on my part, but I accept that this incident represents a serious error of judgment.” The economist, Piroska Nagy, left the fund as part of a buyout of nearly 600 employees instituted by Mr. Strauss-Kahn to cut costs.

As she was in the foyer, “he came out of the bathroom, fully naked, and attempted to sexually assault her,” Mr. Browne said, adding, “He grabs her, according to her account, and pulls her into the bedroom and onto the bed.” He locked the door to the suite, Mr. Browne said.

“She fights him off, and he then drags her down the hallway to the bathroom, where he sexually assaults her a second time,” Mr. Browne added.

At some point during the assault, the woman broke free, Mr. Browne said, and “she fled, reported it to other hotel personnel, who called 911.” He added, “When the police arrived, he was not there.” Mr. Browne said Mr. Strauss-Kahn appeared to have left in a hurry. In the room, investigators found his cellphone, which he had left behind, and one law enforcement official said that the investigation uncovered forensic evidence that would contain DNA.