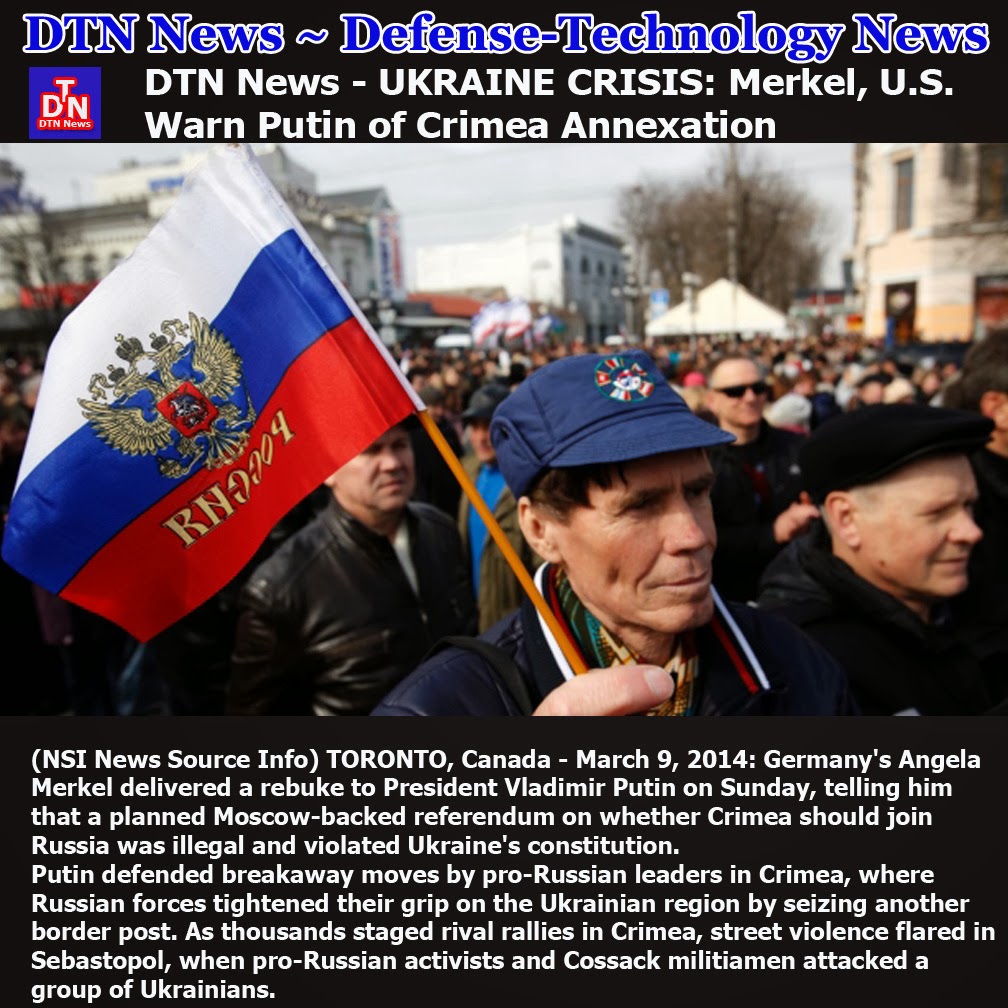 
Putin defended breakaway moves by pro-Russian leaders in Crimea, where Russian forces tightened their grip on the Ukrainian region by seizing another border post.
As thousands staged rival rallies in Crimea, street violence flared in Sebastopol, when pro-Russian activists and Cossack militiamen attacked a group of Ukrainians.
Russian forces' seizure of the Black Sea peninsula has been bloodless but tensions are mounting following the decision by pro-Russian groups there to make Crimea part of Russia.
The operation to seize Crimea began within days of Ukraine's pro-Russian President Viktor Yanukovich's flight from the country last month. Yanukovich was toppled after three months of demonstrations against a decision to spurn a free trade deal with the European Union for closer ties with Russia. 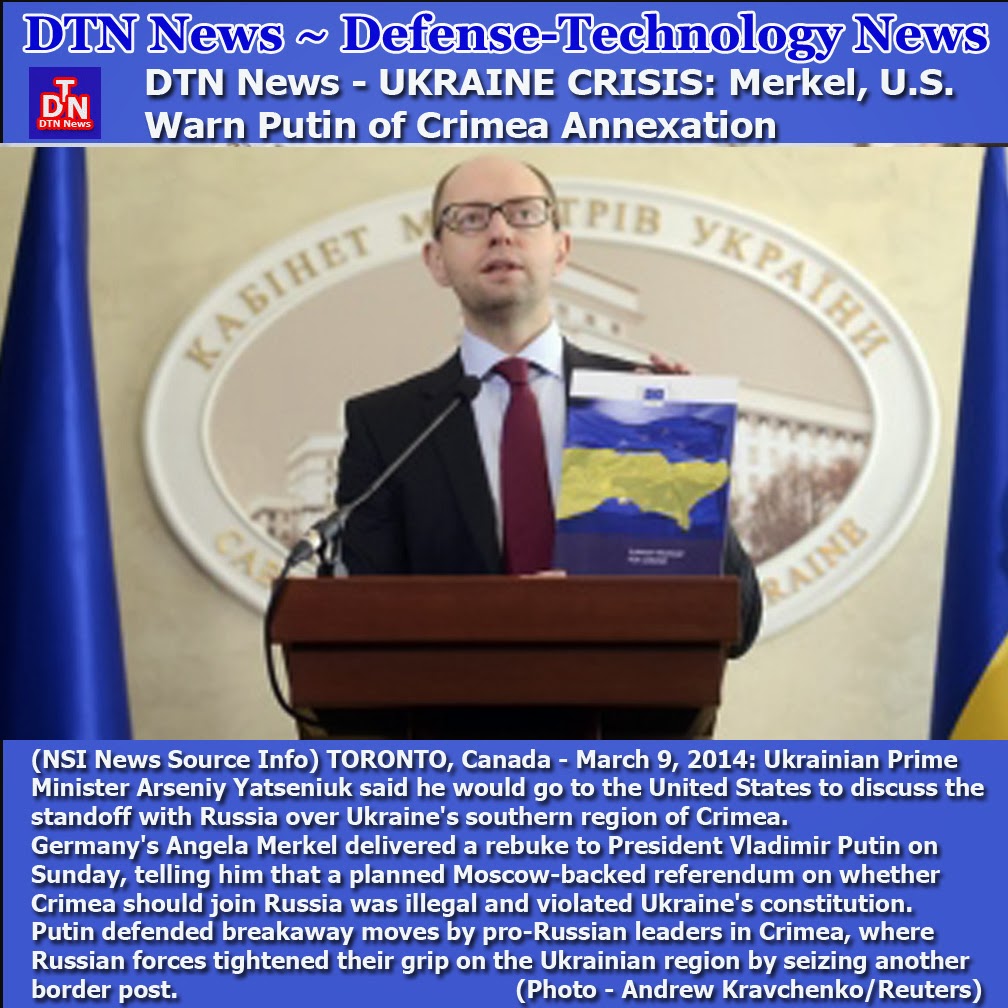 Ukrainian Prime Minister Arseniy Yatseniuk will hold talks with President Barack Obama in Washington on Wednesday on how to find a peaceful resolution to the crisis, the White House said.
One of Obama's top national security officials said the United States would not recognise the annexation of Crimea by Russia if residents vote to leave Ukraine in a referendum next week.
Putin declared a week ago that Russia had the right to invade Ukraine to protect Russian citizens, and his parliament has voted to change the law to make it easier to annex territory inhabited by Russian speakers."We won't recognize it, nor will most of the world," deputy national security adviser Tony Blinken said.
Speaking by telephone to Merkel and British Prime Minister David Cameron, Putin said steps taken by authorities in Crimea were "based on international law and aimed at guaranteeing the legitimate interests of the peninsula's population," the Kremlin said.
A German government statement, however, said the referendum was illegal. "Holding it violates the Ukrainian constitution and international law."

Late on Sunday, an armed pro-Russian force wearing military uniforms bearing no designated markings sealed off another military airport in Crimea, a defence ministry spokesman on the peninsula said.
The 80 or so-strong group, who were supporting 50 civilians, blocked off the entrance to the airport near the village of Saki and established machine-gun posts along the landing strip, the spokesman, Vladislav Seleznyov, told Reuters by telephone.

'Despite the differences in the assessments of what is
happening, they (Putin, German Chancellor Angela Merkel, British PM David Cameron) expressed a common
interest in de-escalation of the tensions and normalization of
the situation as soon as possible.'
The civilian group, who were wielding sticks and clubs, sought to break into the airport's control terminal, he said
Earlier in the day, Russian forces seized a border post on the western edge of Crimea, trapping about 15 personnel inside, a border guard spokesman said, revising an earlier figure of 30.
The spokesman, Oleh Slobodyan, said Russian forces now controlled 11 border guard posts across Crimea, a former Russian territory that is home to Russia's Black Sea fleet and has an ethnic Russian majority.
In Sevastopol, several hundred people held a meeting demanding that Crimea become part of Russia, chanting: "Moscow is our capital."
Across town at a monument to Ukrainian poet Taras Shevchenko, violence flared at a meeting to commemorate the 200th anniversary of his birth, when pro-Russian activists and Cossacks attacked a small group of Ukrainians guarding the event and the police had to intervene.
Footage from the event showed a group of men violently kicking one of the Ukrainians as he lay on the ground and a Cossack repeatedly hit him with a long black leather whip.
Former Russian oil tycoon, Mikhail Khodorkovsky, released from jail in December, addressed a crowd in Kyiv's Independence Square lambasting his old foe Putin for his heavy-handed approach to protesters in Ukraine. 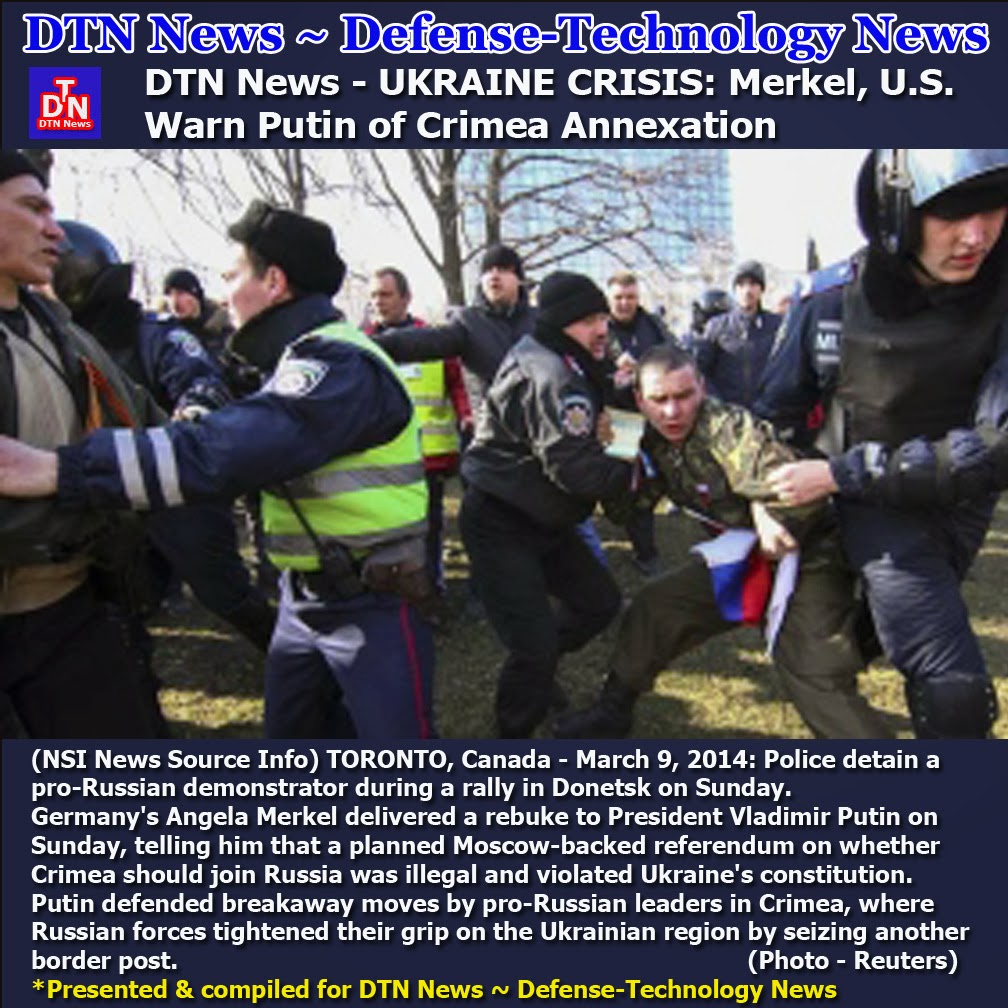 "Russian propaganda lies, as always. There are no fascists or Nazis here, no more than on the streets in Moscow or St  Petersburg," said Khodorovsky, who spent 10 years in a Russian prison. "These are wonderful people who stood up  for their freedom."
In Simferopol, Crimea's main city, pro- and anti-Russian groups held rival rallies.
Vladimir Kirichenko, 58, an engineer, opposed the regional parliament's plans for a vote this month on Crimea joining Russia. "I don't call this a referendum. It asks two practically identical questions: Are you for the secession of Ukraine or are you for the secession of Ukraine?
So why would I go and vote?"Several hundred opponents of Russian-backed plans for Crimea to secede gathered, carrying blue and yellow balloons the colour of the Ukrainian flag. The crowd sang the national anthem, twice, and an Orthodox Priest led prayers and a hymn.

Around 2,000 Russian supporters gathered in Lenin Square, where there is a statue of the Soviet state founder, clapping along to nostalgic Soviet era songs being sung from the stage. 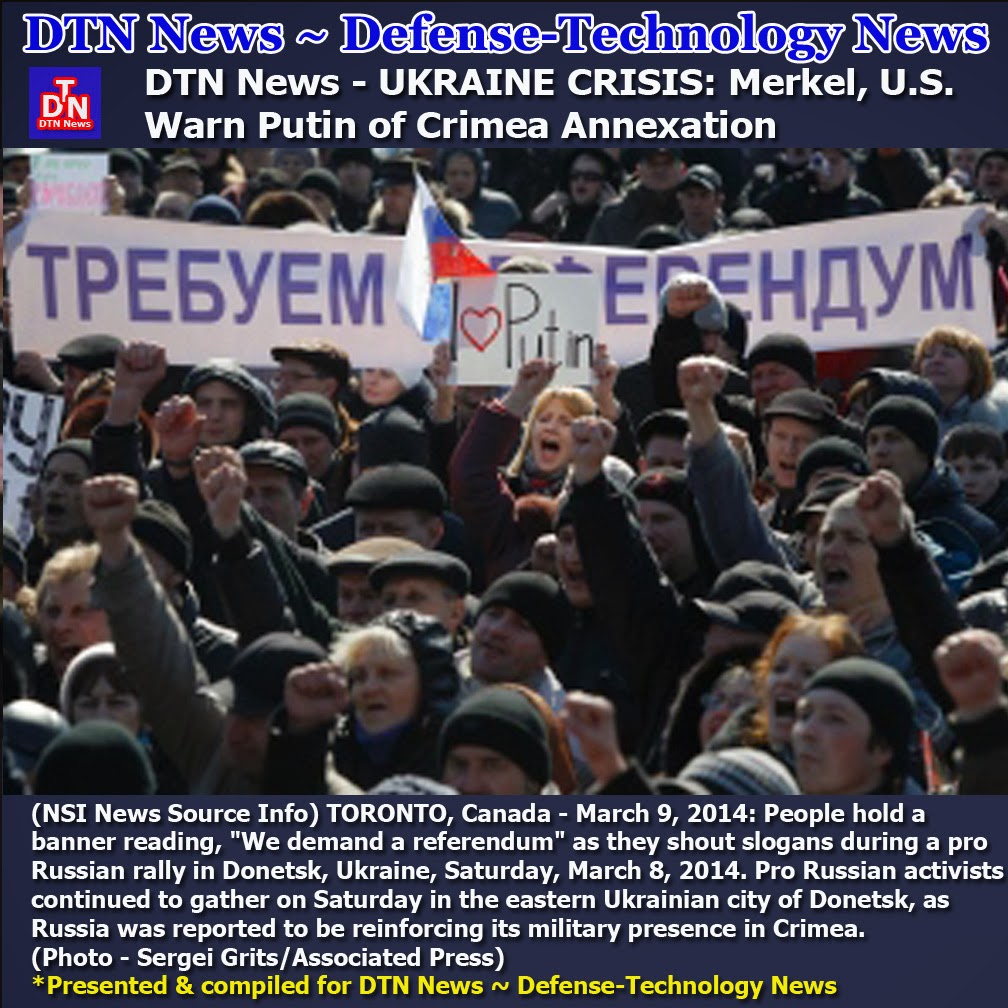 Alexander Liganov, 25 and jobless, said: "We have always been Russian, not Ukrainian. We support Putin."
President Vladimir Putin declared a week ago that Russia had the right to invade Ukraine to protect Russian citizens, and his parliament has voted to change the law to make it easier to annex territory inhabited by Russian speakers.
At a rally in the eastern city of Donetsk, home to many Russian speakers, presidential candidate Vitaly Klitschko, a former boxing champion, said Ukraine should not be allowed to split apart amid bloodshed.
"The main task is to preserve the stability and independence of our country," he said.
U.S. Secretary of State John Kerry, speaking to Russia's foreign minister for the fourth day in a row, told Sergei Lavrov on Saturday that Russia should exercise restraint.The worst face-off with Moscow since the Cold War has left the West scrambling for a response, especially since the region's pro-Russia leadership declared Crimea part of Russia last week and announced a March 16 referendum to confirm it.
"He made clear that continued military escalation and provocation in Crimea or elsewhere in Ukraine, along with steps to annex Crimea to Russia, would close any available space for diplomacy, and he urged utmost restraint," a U.S. official said. 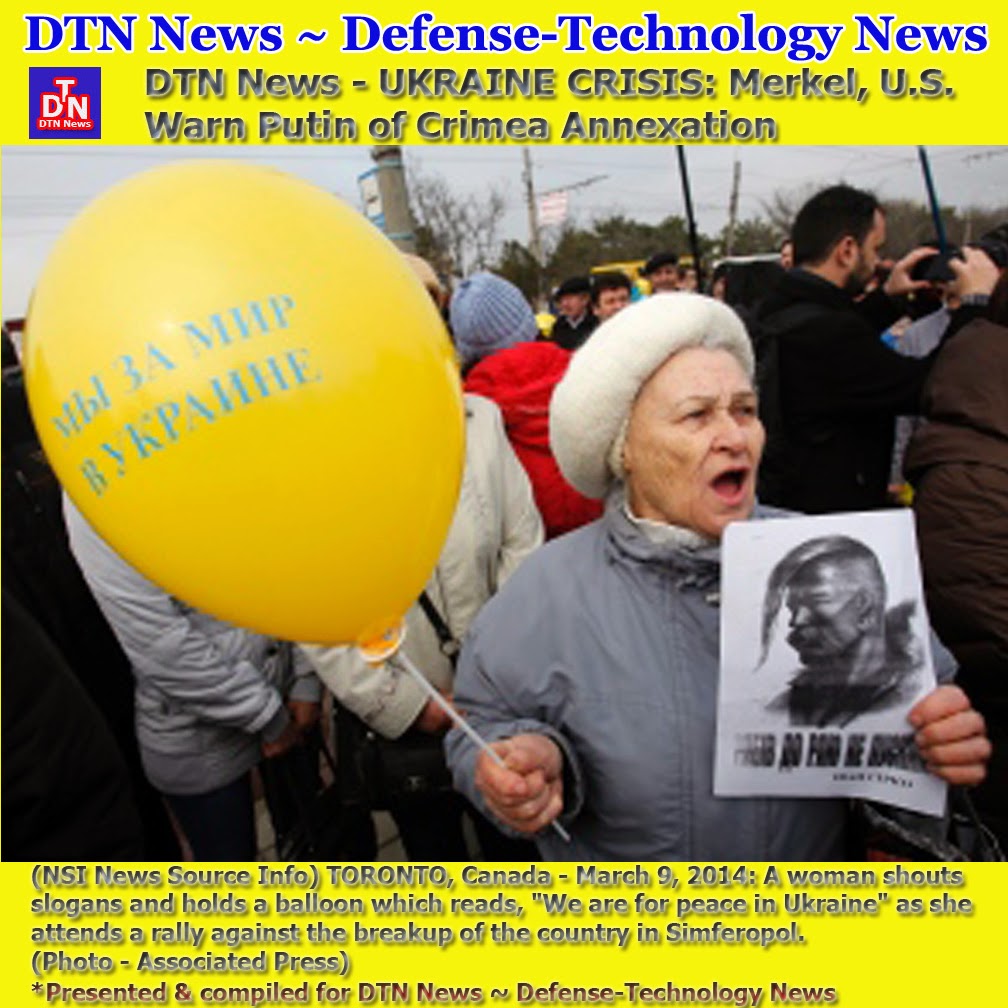 A spokeswoman for the Organization for Security and Cooperation in Europe said military monitors from the pan-Europe watchdog had on Saturday been prevented for the third time in as many days from entering Crimea.
Moscow denies that the Russian-speaking troops in Crimea are under its command, an assertion Washington dismisses as "Putin's fiction." Although they wear no insignia, the troops drive vehicles with Russian military plates.Shots were fired to turn back the mission of more than 40 unarmed observers, who have been invited by Kyiv but lack permission from Crimea's pro-Russian authorities to cross the isthmus to the peninsula. No one was hurt.
A Reuters reporting team filmed a convoy of hundreds of Russian troops in about 50 trucks, accompanied by armoured vehicles and ambulances, which pulled into a military base north of Simferopol in broad daylight on Saturday.
Ukrainian troops are performing training exercises in their bases but there are no plans to send them to Crimea, Interfax news agency quoted acting Defence Minister Ihor Tenyukh as saying. Ukraine's military, with 130,000 troops, would be no match for Russia's. So far Kyiv has held back from any action that might provoke a response.
*Link for This article compiled by K. V. Seth from reliable sources CBC News
*Speaking Image - Creation of DTN News ~ Defense Technology News
*Photograph: IPF (International Pool of Friends) + DTN News / otherwise source stated
*This article is being posted from Toronto, Canada By DTN News ~ Defense-Technology News Contact:dtnnews@ymail.com
©COPYRIGHT (C) DTN NEWS DEFENSE-TECHNOLOGY NEWS