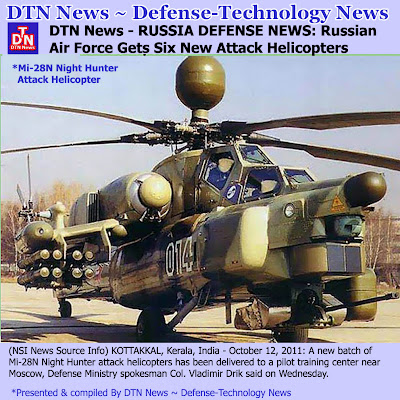 “The helicopters have been delivered to the Torzhok training center to improve the pilot training program there,” Drik said.
The Mi-28N is the latest modification of the Mi-28 Havoc attack helicopter, manufactured by the Rostvertol plant in southern Russia. It has been designed to conduct hunter-killer missions against main battle tanks, helicopters, ground forces, and armor in any weather conditions.
The deliveries of Mi-28Ns to the units in Russia’s North Caucasus and Central military districts started in 2009. A total of 24 Mi-28s were in service with the Russian Air Force as of February 2011.
Two Mi-28Ns were lost in crashes during training flights in 2009 and 2011.
Russia's Defense Ministry has said it is planning to procure between 45 and 67 Mi-28Ns in the next few years, and to fully replace the Mi-24 Hind helicopters with Mi-28Ns in the Armed Forces by 2015.

Source: DTN News - - This article compiled by Roger Smith from reliable sources Boeing
(NSI News Source Info) KOTTAKKAL, Kerala, India - October 12, 2011: Boeing (NYSE: BA) and Cargolux Airlines shared another milestone in the history of the iconic 747, as the airline took delivery of the first Boeing 747-8 Freighter today. Following delivery at the Boeing Delivery Center at the company's Everett site, the airplane departed for Seattle-Tacoma International Airport, where the new freighter will receive its first cargo load, destined for Cargolux headquarters in Luxembourg. 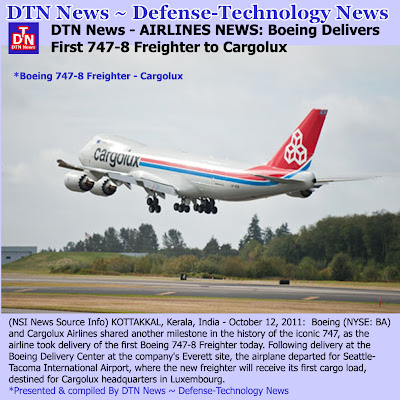 Boeing, Cargolux and Nippon Cargo Airlines announced the initial orders for the 747-8 Freighter in November 2005. Today's delivery comes nearly 18 years after Cargolux was the recipient of the first Boeing 747-400 Freighter, which went on to become the workhorse and standard of the air cargo industry.
"This is a great day for The Boeing Company and for Cargolux," said Jim Albaugh, president and CEO, Boeing Commercial Airplanes. "The 747-8 Freighter is truly the Queen of the Skies for the 21st Century, and will continue the promise of the 747 for decades to come."
The airplane will be a perfect addition to the Cargolux fleet, said Frank Reimen, Cargolux president and CEO. "The new Boeing 747-8 Freighter will help Cargolux maintain its position as an industry leader that we built upon our 747-400 Freighter operation. We look forward to the efficiency and environmental benefits that come with this great airplane," he added.
Cargolux has ordered a total of 13 747-8 Freighters – its 10-airplane launch order in 2005 and a follow-on order for three additional airplanes placed in 2007.
"The new 747-8 Freighter stands as a monument to the incredible team that designed and built this airplane," said Elizabeth Lund, vice president and general manager of the 747 program. "And it's a pleasure to deliver this airplane to Cargolux, an airline that has long been dedicated to Boeing and the 747 program."
The 747-8 Freighter offers double-digit improvements in fuel burn, operating cost and lower emissions over the airplane it replaces. It also provides 16 percent more revenue-generating cargo volume, which allows it to hold seven additional pallets. The new model carries a maximum structural payload capacity of 147.6 tons (133.9 metric tonnes) while providing the same nose-door loading capability, industry-standard 10-foot (3-m) -high pallets and real-world cargo density capability at 9.9 pounds per cubic foot (159 kg/m3) as the industry standard 747-400 Freighter and maintaining interlining capability with the Boeing 777 Freighter.
The new GEnx-2B67 engines incorporate the latest technologies – such as a composite fan case and blades and a revolutionary turbine – to create double-digit efficiency gains over the engines it replaces.
Eight customers have ordered a total of 75 747-8 Freighters.