Despite the move, American and European diplomats frantically worked throughout Friday to try and lay out clearer terms for peace negotiations as a means to ultimately lure the Palestinian side away from the U.N. track.

Palestinians in Ramallah listened Friday to their leader, Mahmoud Abbas, argue for statehood at the U.N.

The so-called Quartet of powers brokering Middle East peace, which comprises the U.S., European Union, U.N. and Russia, outlined a one-year timeline by which to conclude negotiations on a creating an independent Palestinian state. This would include a requirement for the Israelis and Palestinians to provide comprehensive proposals on borders and security within three months and economic incentives from the international community to the Palestinian Authority.

"This is a concrete proposal to be negotiated without delay or preconditions," U.S. Secretary of State Hillary Clinton said.

The Palestinians didn't formally respond to the Quartet's offer, but said privately that it didn't address their two most pressing requirements for returning to negotiations. These include a complete freeze on Jewish construction in the West Bank and East Jerusalem and Israel's willingness to use its borders prior to the 1967 Six Day war as the baseline for talks, while recognizing the need for some territorial swaps.

"I don't think this is going to fly," said a senior Palestinian official in response to the Quartet's statement. "They ignored our most important requirements." 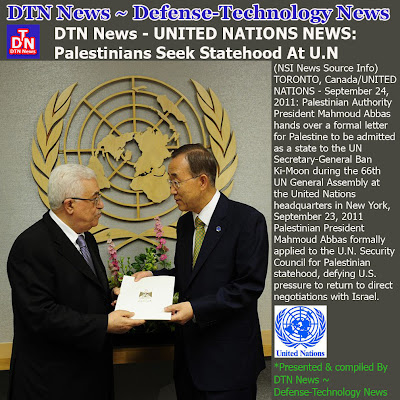 Palestinian Authority President Mahmoud Abbas hands over a formal letter for Palestine to be admitted as a state to the UN Secretary-General Ban Ki-Moon.

Tens of thousands of jubilant Palestinians gathered in the West Bank in anticipation of Mr. Abbas's speech to the U.N., while in New York, the prospect of the first serious peace talks in nearly three years seemed to suggest the possibility—even if faint—of a way forward.

Mr. Abbas drew standing ovations earlier on Friday when he addressed the U.N. General Assembly, calling for a "Palestinian spring." He spoke only moments after submitting a formal request for Palestinian statehood to U.N. Secretary-General Ban ki-Moon.

Mr. Abbas said the Israeli-Palestinian conflict was the principal issue standing in the way of stability in the Mideast and charged the international community with denying his people a homeland for over six decades.

"It is a moment of truth and my people are waiting to hear the answer of the world. Will it allow Israel to continue its occupation, the only occupation in the world?" Mr. Abbas said in his 45-minute address.

He proudly raised the letter he had presented Mr. Ban, smiled, and waved it to the room.

The 76-year-old Arab leader said he had been forced to go to the U.N. Security Council because the negotiating process under Israeli Prime Minister Benjamin Netanyahu had broken down. He charged that continued Jewish construction in the West Bank and East Jerusalem was rapidly making a two-state solution to end the Arab-Israeli conflict unviable.

"The occupation is racing against time to redraws the borders on our land according to what it wants and to impose a fait accompli on the ground," Mr. Abbas said.

Mr. Netanyahu followed Mr. Abbas in addressing the General Assembly and directly challenged his narrative on the nature of the Mideast conflict. He said that the Palestinians' refusal to recognize Israel as a Jewish state, rather than any settlement activity, was the primary motivator for the conflict.

Mr. Netanyahu stressed that any efforts to forge a two-state solution without extensive negotiations on Israel's security could be disastrous for the Jewish state's security.

He reminded the General Assembly that Israel pulled out all of its security forces and settlers from the Gaza Strip in 2005, but that the militant group Hamas filled the power vacuum in the Palestinian territory.

Responding to Mr. Abbas's statement that the Palestinians were armed "only with their hopes and dreams," Mr. Netanyahu said, "Hopes, dreams—and 10,000 missiles and Grad rockets supplied by Iran."

Still, Mr. Netanyahu challenged Mr. Abbas in front of the U.N. to immediately engage in direct negotiations with his government. He said that an independent Palestinian state could never be created through the offices of the U.N., which he said worked at times like the "theater of the absurd."

"I continue to hope that President Abbas will be my partner for peace…Why don't you join me? Mr. Netanyahu said to the General Assembly. "We've both flown thousands of miles to New York. So let's meet here today in the United Nations…What is there to stop us?"

The Palestinian Authority is pressing hard for the votes it needs to pass an application recognizing its statehood in the U.N. Security Council, despite the likelihood of a U.S. veto, Foreign Minister Riad Malki says in an interview. If the effort fails, he says, both the Palestinians and the U.S. will be worse off.

Mr. Abbas's submission to the U.N. Security Council was a direct rebuke of the Obama administration's foreign policy. And it called into question Washington's future role as the ultimate arbiter on diplomacy in the Mideast, a position it has held for the past 25 years.

U.S. officials have lobbied Mr. Abbas for months to return to direct negotiations with the Israelis, arguing it was the only path to peace. The U.S. Congress, meanwhile, has threatened to cut off hundreds of millions of dollars in annual financial assistance to the Palestinian Authority if Mr. Abbas goes forward.

U.S. and European officials said their primary focus in the coming days will be to convince Messrs. Abbas and Netanyahu to return to the negotiating table under the Quartet's plan. But they also said a push was already beginning inside the 15-nation U.N. Security Council to convince the majority of its members not to back the Palestinian bid.

Lebanon, the current president of the Security Council, said it would introduce the Palestinian application for statehood for discussion at the 15-nation council on Monday.

The U.S., as one of five permanent members of the Security Council, has a veto. But U.S. officials privately acknowledge that they worry about the impact of Washington's standing in the Middle East if it is forced to utilize it.

Mr. Abbas needs nine of 15 Security Council members to gain a recommendation for membership to the General Assembly, where a two-thirds majority would then be required. But U.S. officials believe France and the U.K. are likely to abstain, while developing countries like Colombia and Bosnia-Herzegovina are undecided.

Palestinian officials acknowledge that a Security Council vote against their measure could have disastrous political consequences for Mr. Abbas.

Alternately, the Palestinians are also considering presenting a resolution to the U.N. General Assembly that would give the Palestinian Authority advanced standing at the U.N. and allow it to join such bodies as the International Criminal Court and the U.N. Human Rights Committee. Israeli officials worry the Palestinians could use these forms to charge Israeli military officials with war crimes.

Getting Out the Vote

Where members of the U.N. Security Council are believed to stand on the U.N. recognizing a Palestine state; nine votes are needed with no veto

U.N. diplomats said such a resolution at the 193-nation General Assembly would pass by a large margin.

Tens of thousands of Palestinians gathered in cities across the West Bank to celebrate the move and watch Mr. Abbas's speech on large television screens set up in central squares for the occasion. They were the largest public gatherings since the funeral of Mr. Abbas's predecessor, Yasser Arafat, in 2004. There were no rallies in Gaza, where the militant group Hamas is in control and opposed Mr. Abbas's UN initiative.

In the West Bank, the mood was jubilant as crowds made up of whole families gathered hours before the speech to sing, dance, chant slogans and wave Palestinian flags. Among the many posters and banners, a few criticized U.S. President Barack Obama, whose opposition to the statehood bid deeply disappointed Palestinians and Arabs across the Middle East.

In the West Bank city of Ramallah, seat of Mr. Abbas's Palestinian Authority, the crowd filled Arafat square and lined the rooftops surrounding it. It erupted in cheers and flag-waving when Mr. Abbas asked the U.N. to accept his application for statehood.

"It was an emotional moment for me," said Ghadir Aydieh, a 23-year old said, a Palestinian flag wrapped around her head. "He carried the message of the Palestinian people. It has given us some hope."

The gatherings were overwhelming peaceful, but the Palestinian security and police forces mobilized all 29,000 of its officers to prevent violence and clashes with the Israeli military.

Israel itself mobilized more than 20,000 riot police and security officials. Major checkpoints were manned with thousands of soldiers in riot gear, and there were between youths throwing rocks and Israeli soldiers at some checkpoints.

—Joe Lauria contributed to this article.

Write to Jay Solomon at jay.solomon@wsj.com