Source: DTN News - - This article compiled by Roger Smith from reliable sources AP
(NSI News Source Info) TORONTO, Canada / WADI EL-HAI, Libya- August 13, 2011: Libya's rebels on Saturday fought with regime troops for control of a key mountain town that is a strategic gateway on the road to Tripoli in an intensified western offensive aiming to push toward Moammar Gadhafi's stronghold in the capital. 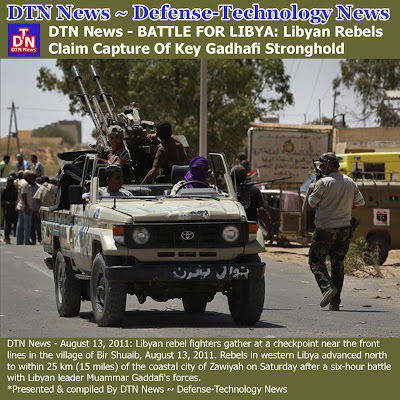 Rebels earlier claimed control of Gharyan, saying they had moved into the centre of the town and that Gadhafi's troops had withdrawn. But several hours later, regime forces returned with reinforcements and the two sides clashed, said rebel spokesman Gomma Ibrahim.
Gharyan lies at the northern end of the Nafusa Mountains, and Gadhafi's hold on the town had been a sticking point for rebels who have taken control of most of the range. The town lies on the main road leading directly from Nafusa to Tripoli, 50 miles (80 kilometres) to the north on the Mediterranean coast.
Rebels have been trying for weeks to take Gharyan, and NATO airstrikes have hit Gadhafi's forces several times in the area.
On Saturday morning, rebel fighters moved into the town and, alongside residents, battled for about four hours with the remains of regime forces in the town -- mostly young fighters and mercenaries, said Ibrahim. The Gadhafi troops withdrew, but after a brief lull, the troops returned in intensified numbers, he said.Ibrahim said that Gharyan residents had joined with the entering rebel fighters, in part out of anger that some 2,500 of the town's men had been arrested in recent months for voicing opposition to Gadhafi. The claims could not immediately be confirmed independently."This is the biggest stop on the way to Tripoli, where we will topple down the tyrant and liberate all Libya," Ibrahim said.
The capture of Gharyan would solidify the rebels' flank as they push ahead with a new offensive launched from further west in the Nafusa range, pushing down into the coastal plain where Gadhafi's forces have been concentrated. The rebels are hoping to take several cities along the coast before moving on to Tripoli.
Rebel commander Fathi el-Ayeb said his fighters were 10 miles (15 kilometres) away from Gadhafi-held Zawiya, a key target in the offensive. He said the rebels scouts who returned from Zawiya claim the local residents there were waiting for the rebels to reach the city's outskirts to join their fight against Gadhafi.
"They are waiting for the rebels to come and they will join them," said el-Ayeb.
Dozens of Libyan families have been taking advantage of the fighting to flee from Tripoli and head into the Nafusa Mountains.
The families were making their way through desert back roads that appeared to be less guarded amid the fighting between rebels and Gadhafi's forces near Bir Ghanam, 50 miles (80 kilometres) southwest of Tripoli.
The rebels said they registered 55 families that fled Tripoli in the past three days for the Nafusa mountains. Many were originally from the west but had escaped to Tripoli when the fighting broke out in the mountains months ago.
One of those on the road, Sassi Ahmed, a 47-year-old social studies teacher, said he left Tripoli with his wife and six children because the situation in the capital was "very dangerous and frightening," with no gas or electricity.
Ahmed told The Associated Press the family piled up their belongings onto their car and sneaked out of the city in a convoy with at least five other families.
Another man, who would not give his name because he feared for relatives who remained in Tripoli, said Gadhafi's troops first turned him back from one road but he managed to find another way, travelling with his wife and two daughters.
Libya's revolt began in February, with the rebels quickly wresting control of much of the eastern half of the country, as well as pockets in the west. The conflict later settled into a stalemate with the rebels failing to budge the front lines in the east since April.
The assault from Nafusa is an attempt to try to circumvent the deadlock.
At the main front in the east, rebels fighting Gadhafi's forces claimed they captured part of a strategic port city of Brega that has repeatedly changed hands in the 6-month-old civil war.
The Benghazi-based rebels' military spokesman, Col. Ahmed Bani, said that rebel fighters are clashing with Gadhafi forces to lay control over the rest of the city. "Very soon all Brega will be liberated," he said.
Related News;
*Link for This article compiled by Roger Smith from reliable sources AP
*Speaking Image - Creation of DTN News ~ Defense Technology News
*This article is being posted from Toronto, Canada By DTN News ~ Defense-Technology News
Contact:
dtnnews@ymail.com 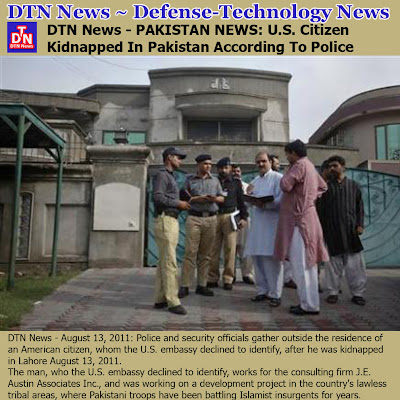 The man, who the U.S. embassy declined to identify, works for the consulting firm J.E. Austin Associates Inc., and was working on a development project in the country's lawless tribal areas, where Pakistani troops have been battling Islamist insurgents for years.

A U.S. embassy spokesman said they were trying to confirm the reports.

"Some six to eight people broke into his house at around 3:30 a.m., when security guards on duty were making preparation for fasting," police official Tajamal Hussain told Reuters, referring to the Ramadan fast observed by Muslims.

"Two of the assailants came from the front gate while about six others used the backdoor. They tortured the guards and then took the American with them."

A security official familiar with the incident said the gunmen forced the man's driver to knock on his bedroom door. When the man opened it, they took him.

Hussain said the man, in his 60s, had been living in Pakistan five to six years. He mostly lived in Islamabad but had been traveling to Lahore.

The security official said there has been no claim of responsibility.

Kidnap for ransom is relatively common in Pakistan, though foreigners are not often targets. Militants also occasionally take foreigners hostage.

Pakistani Taliban, linked to al Qaeda, have claimed responsibility for kidnapping a Swiss couple in July in the volatile southwestern province of Baluchistan.

They said the couple could be freed in exchange for a Pakistani woman serving a jail term in the United States for shooting FBI agents and U.S. soldiers in Afghanistan.

Anti-U.S. sentiments runs high in Pakistan, and already prickly ties between Islamabad and Washington hit a low point after the May 2 killing of al Qaeda chief Osama bin Laden in an attack that Pakistan termed a breach of its sovereignty.