Source: DTN News - - This article compiled by Roger Smith from reliable sources
ABC News
(NSI News Source Info) TORONTO, Canada - July 23, 2011:
People in Norway are in shock today after a man dressed as a police officer is suspected of shooting and killing at least 84 at a summer youth camp Friday, just hours after setting off an explosion in nearby Oslo that killed seven. 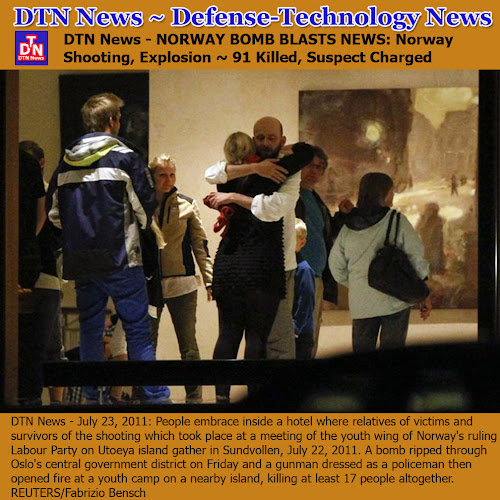 Officials initially reported that at least 10 people were killed at the youth camp on the island of Utoya but later increased the death toll after more bodies were found, according to the Associated Press.
Officials said that the death toll could still rise.
Norwegian police have arrested a Norwegian man for the attacks.
Police would not confirm the identity of the suspect but said they have charged him with acts of terrorism.
The man is believed to be responsible for both attacks.
TV2, Norway's largest broadcaster, was among several local media outlets that identified the suspect as Anders Behring Breivik, 32.
Breivik is described as a member of "right-wing extremist groups in eastern Norway."

Police said the investigation is still open and they are trying to determine an exact motive and whether he was working with anyone.

"This is beyond comprehension. It's a nightmare. It's a nightmare for those who have been killed, for their mothers and fathers, family and friends," Prime Minister Jens Stoltenberg told reporters early today.

Just hours before the shooting at a summer youth camp run by Norway's ruling party on the island of Utoya, explosions ripped through a government building in the capital city of Oslo and left at least seven people dead.

The suspect had been seen in Oslo earlier in the day, according to media reports.

After blasts rocked Oslo, the shore of a once idyllic lake at Utoya became a horrific triage area.

"The guy was dressed as a policeman and he was trying to ensure that he was helping us and he said, 'come here,'" said witness Jorgen Benone. "He had a rifle or a sniper which he was using to shoot at us. It was total chaos."

Many tried to swim to safety but the gunman armed with several weapons was able to shoot them as they swam.

Bodies after bodies were pulled from the lake.

The boats and helicopters couldn't move the dead and injured fast enough.

"People were jumping out of windows and running everywhere in all directions - terrified for their lives," said Benone. "Most people ran towards the water hiding behind stones and small hills."
Adrian Pracon, a 21-year-old district secretary, says shooting victims were falling on top of him on the island.
He said he played dead in order to save his own life.
"I feel his breath, I could feel his boots, I could the warmth from the barrel but I didn't move and that's what saved my life," said Pracon.
ABC News' Brian Ross, Mark Schone, Josh Haskell, Robin Respaut and the Associated Press contributed to this report.
*Link for This article compiled by Roger Smith from reliable sources ABC News
*Speaking Image - Creation of DTN News ~ Defense Technology News
*This article is being posted from Toronto, Canada By DTN News ~ Defense-Technology News
Contact:
dtnnews@ymail.com 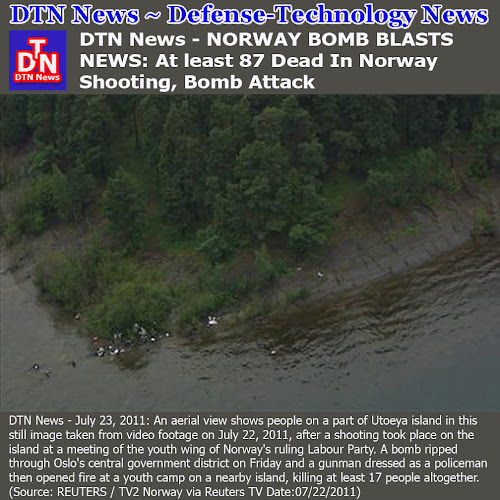 Witnesses said the gunman, identified by police as a 32-year-old Norwegian, moved across the small, wooded Utoeya holiday island firing at random as young people scattered in fear. Norwegian television TV2 said the gunman detained by police was described as tall and blond and had links to right-wing extremism.

"We had all gathered in the main house to talk about what had happened in Oslo. Suddenly we heard shots. First we thought it was nonsense. Then everyone started running," a survivor, 16-year-old called Hana told Norway's Aftenposten.

"I saw a policeman stand there with earplugs. He said 'I'd like to gather everyone'. Then he ran in and started shooting at people. We ran down toward the beach and began to swim." Hana said the gunman fired at people in the water.

Many sought shelter in buildings as shots echoed across the island, ran into the woods or tried to swim to safety. Boats searched for survivors into the night, searchlights sweeping the coast. Rescue helicopters flew overhead.

The bomb, which shook the city center in mid-afternoon, blew out the windows of the prime minister's building and damaged the finance and oil ministry buildings. Prime Minister Jens Stoltenberg, who was not in the building at the time, will give a press conference at 0600 GMT on Saturday.

There were no immediate reports of other suspects. But acting police chief Sveinung Sponheim said authorities were working on the hypothesis that several people may have been involved.

Police seized the gunman, named by local media as Anders Behring Breivik, and later found undetonated explosives on the island, a pine-clad strip of land about 500 meters long, to the northwest of Oslo.

Breivik's Facebook page appeared to have been blocked by late evening. Earlier it had listed interests including bodybuilding, conservative politics and freemasonry.

Norwegian media said he had set up a Twitter account a few days ago and posted a single message on July 17 saying: "One person with a belief is equal to the force of 100,000 who have only interests."

About 10 police officers were outside the address registered to his name in a four-story red brick building in west Oslo.

The Norwegian daily Verdens Gang quoted a friend as saying

he became a right-wing extremist in his late 20s. It said he expressed strong nationalistic views in online debates and had been a strong opponent of the idea that people of different cultural backgrounds can live alongside each other.

With police advising people to evacuate central Oslo, and some soldiers taking up positions on the streets, the usually sleepy capital was gripped by fear of fresh attacks. Streets were strewn with shattered masonry, glass and twisted steel.

Norwegians reacted with horror to television images of the bodies of young men and women strewn around the island.

"I just saw people jumping into the water, about 50 people swimming toward the shore. People were crying, shaking, they were terrified," said Anita Lien, 42, who lives by Tyrifjord lake, a few hundred meters (yards) from Utoeya island, northwest of Oslo.

"He walked slowly but surely around it (the island) and shot everyone. Eventually he came to where I sat and then he slowly went over and shot ten people." She escaped by jumping into the water."

"He was so calm, that is what was so strange."

It is the most violent event to strike Norway since World War Two," said Geir Bekkevold, an opposition parliamentarian for the Christian Peoples Party.

The prime minister declined to speculate on who had been involved. But he told a televised news conference. "No one will bomb us to silence, no one will shoot us to silence."

NUPI Senior Research Fellow Jakub Godzimirski said he suspected a right-winger, rather than any Islamist group. Right wing groups have grown up in Norway and elsewhere in northern Europe around the issue of immigration.

"It would be very odd for Islamists to have a local political angle. The attack on the Labour youth meeting suggests it's something else. If Islamists wanted to attack, they could have set off a bomb in a nearby shopping mall rather than a remote island."

Right-wing militancy has generated sporadic attacks in other countries, including the United States. In 1995, 168 people were killed when Timothy McVeigh detonated a truck bomb at a federal building in Oklahoma City.

NATO member Norway has been the target of threats before over its involvement in conflicts in Afghanistan and Libya.

Violence or the threat of it has already come to the other Nordic states: a botched bomb attack took place in the Swedish capital Stockholm last December and the bomber was killed.

Denmark has received repeated threats after a newspaper published cartoons of the Prophet Mohammad in late 2005, angering Muslims worldwide.

In Oslo, the building of a publisher which recently put out a translation of a Danish book on the cartoon controversy was also affected, but was apparently not the target.

The Oslo district attacked is the very heart of power in Norway. Nevertheless, security is not tight in a country unused to such violence and better known for awarding the Nobel Peace Prize and mediating in conflicts, including the Middle East and Sri Lanka.