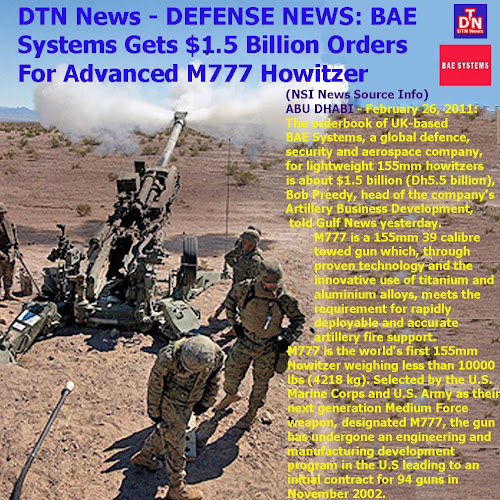 "We deliver 10 guns every month. We conduct foreign military sales through the US government. So far, we have delivered 760 guns," Preedy said on the sidelines of the International Defence Exhibition and Conference (Idex-2011).

Preedy also said the price of one howitzer is approximately $3 million and its customers are primarily the US Army, US Marine Corps, Canada and Australia.

Later at a news conference, BAE Systems announced that a US order for 46 M777 howitzers takes the number of guns ordered to 1,001. "The order comes as BAE Systems continues deliveries of M777 to Canada and Australia, in addition to the US," the company said.

Weighing less than 4,200 kilograms, the revolutionary M777 is the world's first artillery piece to make widespread use of titanium and aluminium alloys, resulting in a howitzer that is half the weight of conventional 155mm systems. As a result, it can be deployed by medium-lift helicopters quickly and beyond the reach of roadside bombs to otherwise inaccessible areas, extending its reach over the theatre of operations.

Mike Smith, managing director of BAE Systems' Global Combat Systems Weapons business, said in a statement that the M777 has passed every development and operational test in vital areas such as accuracy, consistency, operational flexibility and mobility.

BAE Systems said the success of the M777 in operations in Iraq and Afghanistan is reflected in the global interest in the howitzer.

Under the auspices of a recently signed Global Supply Chain (GSC) Deed, Lockheed Martin will establish long-term partnerships by offering Australian companies new opportunities to compete for subcontracts on a full range of Lockheed Martin products and services. 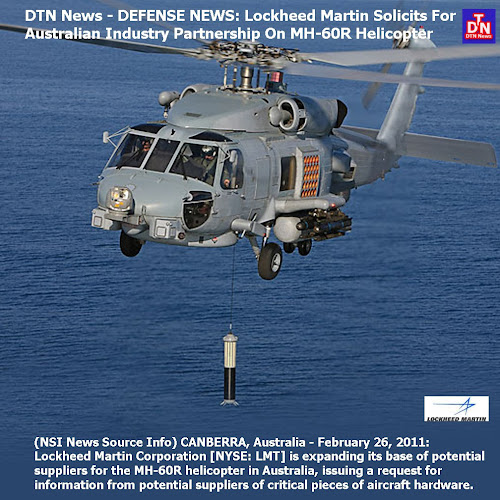 Manufacture of the MH-60R weapons pylons is one of the first opportunities for Australian industry to bid on a project under the GSC Deed. The pylons, which are located on either side of the aircraft, are designed to carry the missiles and torpedoes the MH-60R uses for Anti-Submarine Warfare and Anti-Surface Warfare missions.

“Growth in orders for the MH-60R has resulted in an urgent need for an expanded supply base, and Australian industry has a depth of capability that would be an ideal supplement to our dedicated supplier base,” said George Barton, Lockheed Martin’s director of Naval Helicopter Programs.

The request for information asks potential bidders for cost estimates on varying quantities of pylons, which would include Lockheed Martin’s forecasted domestic demand as well as supply for potential Foreign Military Sales customers through 2018. The Royal Australian Navy is one of those potential customers. The MH-60R is being offered for the country’s Air 9000 Phase 8 competition. Team Romeo—comprising Lockheed Martin and airframe manufacturer Sikorsky Aircraft Corp., General Electric, Raytheon and CAE—is poised to provide 24 multi-mission MH-60R, or “Romeo,” aircraft to Australia.

The source selection process for the MH-60R pylons is expected to conclude by the end of 2011. Lockheed Martin is also considering other prospective GSC and Australia Industrial Capability opportunities on the Air 9000 Phase 8 and other programs.

The first production model of the Lockheed Martin [NYSE: LMT] F-35 Lightning II made its inaugural flight today in preparation for delivery to the U.S. Air Force this spring. The jet will head to Edwards Air Force Base, Calif., to support developmental testing shortly after the Air Force takes delivery. 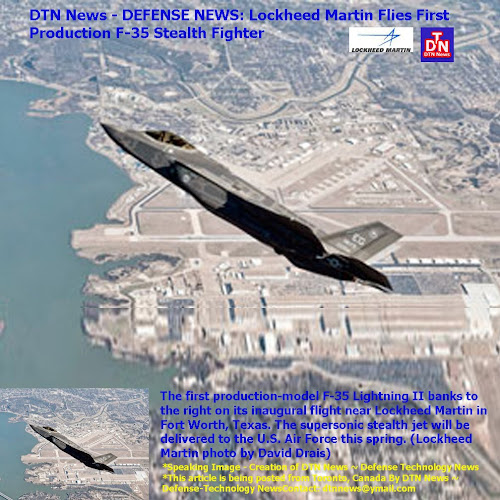 “The aircraft was rock-solid from takeoff to landing, and successfully completed all the tests we put it through during the flight,” said Lockheed Martin Test Pilot Bill Gigliotti. “The Air Force is getting a great jet that represents a huge leap in capability, and we’re looking forward to getting it into the hands of the service pilots in just a few more weeks.”

During the flight, the conventional takeoff and landing (CTOL) F-35A variant, known as AF-6, underwent basic flight maneuvering and engine tests. Test Pilot Gigliotti took off from Naval Air Station Fort Worth Joint Reserve Base at 3:05 p.m. CST and landed at 4:05 p.m. The jet will continue flight tests in Fort Worth for about a month before it is accepted by the Air Force.

The F-35A CTOL variant – designed to meet U.S. Air Force requirements – is also the primary export version of the Lightning II. The air forces of Italy, the Netherlands, Turkey, Canada, Australia, Denmark, Norway and Israel will employ the F-35A.

Photos and videos are available for download at: http://multivu.prnewswire.com/player/42215-lockheed-martin-f-35/ 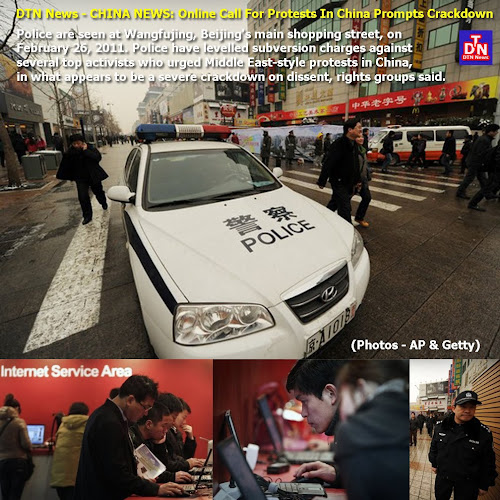 The strict response by authorities comes after a U.S.-based Chinese-language website, Boxun.com, called for repeated attempts each Sunday to launch a "jasmine revolution" in about two dozen cities, including Beijing and Shanghai. The first planned attempt, which was held last Sunday, brought out a swarm of police and foreign media in some of the designated sites but provided no evidence the country was on the cusp of a popular uprising. Still, with regimes toppling in North Africa and the Middle East, authorities in China deemed the threat strong enough to have interrogated, arrested and detained at home dozens of people suspected of fomenting the anti-government movement. Human rights groups based outside China said Friday that police had charged five activists this week with "subversion of state power" and "inciting subversion of state power," serious crimes that carry potentially decade-long prison sentences.
The five were Ran Yunfei, 46, a widely followed blogger and public intellectual; Ding Mao, 45, a student leader during the 1989 Tiananmen democracy protests who spent 10 years in jail; Hua Chunhui, 47, an insurance company manager who has advocated on civil society issues; Liang Haiyi, no age given, a woman accused of posting foreign links about the jasmine revolution on a popular Chinese instant-messaging service; and Chen Wei, 42, a leading human rights activist in central Sichaun province.
The arrests coincide with the disappearance this month of three human rights lawyers, Jiang Tianyong, Tang Jitian and Teng Biao. "The numbers point to a bad situation that is only getting worse," Renee Xia, international director of Chinese Human Rights Defenders, an advocacy group, said in a written statement. "In the matter of a few days, we have seen more cases of prominent lawyers subjected to prolonged disappearances, more criminal charges that may carry lengthy prison sentences for activists, more home raids, and a heavier reliance on extralegal measures." Supporters of the jasmine revolution have been communicating on Twitter, a site only accessible in China with circumvention software since it was blocked by Web censors in 2009. Many cautioned those who planned to attend demonstrations Sunday to be wary of police.