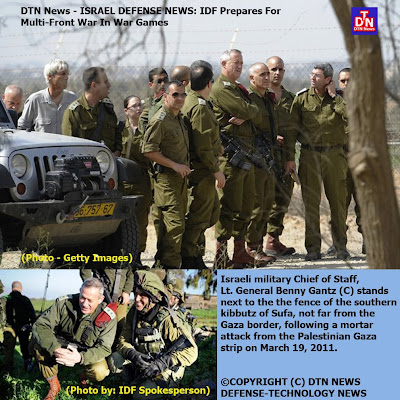 In the face of a changing Middle East, the IDF held a set of war games this week aimed at preparing the military for all-out war against Hezbollah, Syria and Hamas. The exercise did not include soldiers or live-fire exercises, but was held to drill commanders and their decisions in the event of a large-scale war on multiple fronts.
The exercise was the first overseen by new Chief of General Staff Lt.-Gen. Benny Gantz. It was organized by Maj.-Gen. Gershon Hacohen, head of the IDF Colleges. The IDF stressed that the drill was part of the military’s routine exercise program and included all of its various branches – ground, air and navy – with an emphasis on interoperability and operational continuity. The scenarios simulated during the drill included a war with Hezbollah in Lebanon, sparked by a terrorist attack overseas as well as the involvement of Syria, Hamas and Iran. “The drill is part of our need to retain a level of readiness,” Gantz said.
Defense Minister Ehud Barak and members of the Knesset’s Foreign Affairs and Defense Committee visited the base where the exercise was held, even though the political echelon did not play an active role in the war games. Hacohen said the exercise was meant to prepare the IDF for a future war in light of the recent changes in the region. “The IDF is utilizing this opportunity to drill itself and to formulate new understandings,” he said. Meanwhile Thursday, Barak visited the site of the Iron Dome counter-rocket defense system outside of Beersheba, vowing that Israel would deploy additional batteries in the coming years. Barak decided last week to deploy the first battery, which is still undergoing operational tests, outside Beersheba after 100 rockets and mortars hit Israel in the recent round of hostilities in the Gaza Strip.
“This is not a 100-percent solution, and we still do not have it on all of our other fronts. It will take us several more years before we are equipped with more batteries,” Barak said.
RELATED: Yadlin doesn’t see conflict between Israel, Syria Maps released of Hizbullah's military sites, bunkers New security bosses will face sharper challenges
*Link for This article compiled by Roger Smith from reliable sources
By Yaakov Katz - The Jerusalem Post
*Speaking Image - Creation of DTN News ~ Defense Technology News
*This article is being posted from Toronto, Canada By DTN News ~ Defense-Technology News
Contact:
dtnnews@ymail.com

A man, whose identity is not yet known, died on a Singapore Airlines (SIA) flight bound forSan Francisco on Saturday. 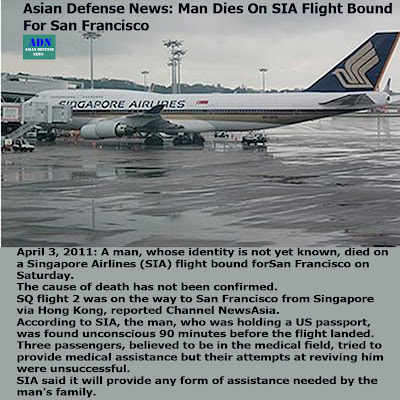 A man, whose identity is not yet known, died on a Singapore Airlines (SIA) flight bound forSan Francisco on Saturday.

The cause of death has not been confirmed.

SQ flight 2 was on the way to San Francisco from Singapore via Hong Kong, reportedChannel NewsAsia.

According to SIA, the man, who was holding aUS passport, was found unconscious 90 minutes before the flight landed.

Three passengers, believed to be in the medical field, tried to provide medical assistance but their attempts at reviving him were unsuccessful.

SIA said it will provide any form of assistance needed by the man's family. 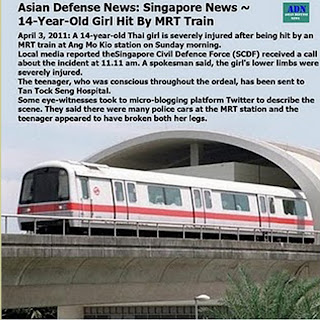 Local media reported theSingapore Civil Defence Force (SCDF) received a call about the incident at 11.11 am. A spokesman said, the girl's lower limbs were severely injured.

The teenager, who was conscious throughout the ordeal, has been sent to Tan Tock Seng Hospital.

Some eye-witnesses took to micro-blogging platform Twitter to describe the scene. They said there were many police cars at the MRT station and the teenager appeared to have broken both her legs.

Felicia Chen (@caesius_helios) tweeted that she was on the way to Toa Payoh when "people suddenly screamed" and she saw the accident victim under the train before MRT officers "ushered us down from the platform".

An SMRT spokesman said train services were not disrupted. Commuters however said there were delays of five to 10 minutes on the North-South Line.

The SMRT is assisting the police with investigations.

Source: DTN News - - This article compiled by Roger Smith from reliable sources Asian Defense News
(NSI News Source Info) TORONTO, Canada -
April 3, 2011: At least one person was killed and 16 others injured on Sunday as new protests erupted in the Afghan province ofKandahar against the burning of a Koran in the United States, local officials said. 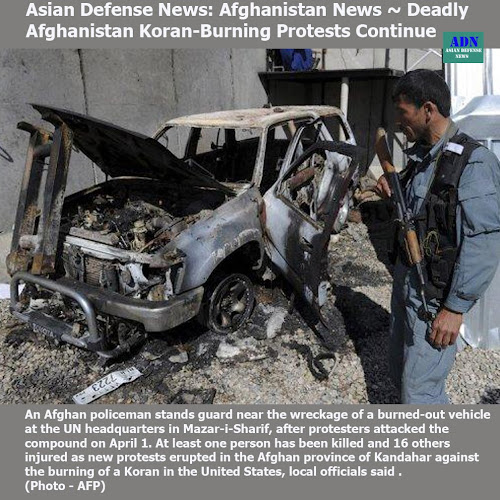 A fresh wave of protests took place in Kandahar and the adjoining districts of Dand and Panjwayi -- the third day of violent demonstrations against the burning of a copy of Koran organised by a Florida pastor.

At least one person was killed, according to another government official who asked not to be named as he was not authorised to speak to the media.
*Link for This article compiled by Roger Smith from reliable sources
Asian Defense News
*Speaking Image - Creation of DTN News ~ Defense Technology News
*This article is being posted from Toronto, Canada By DTN News ~ Defense-Technology News
Contact:
dtnnews@ymail.com

April 3, 2011: Japanese engineers grappling on Sunday to control the world's worst nuclear crisis sinceChernobyl tried to seal a crack leaking radiation into the Pacific sea from a crippled reactor. 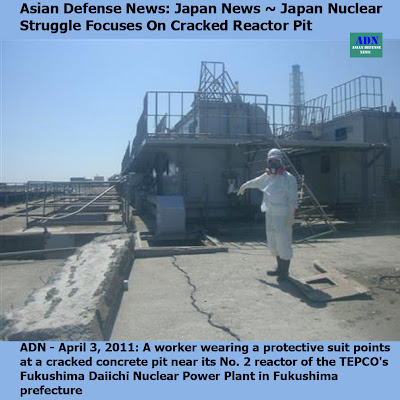 The drama at the six-reactor Fukushima Daiichi complex has dragged into a fourth week, unsettling the global nuclear industry and compounding Japan's suffering after an earthquake and tsunami that left about 27,500 people dead or missing.

Radiation has leaked into the sea, food, drinking water and air. It is hindering efforts to cool overheating fuel rods work at the plant and regain control of the damaged reactors.

Experts say that beyond the disaster zone, there is minimal risk to human health further afield in Japan or abroad.

But the nation is staring at months of work to control the plant, followed by years of cleaning up and containment in the worst atomic crisis since Chernobyl in 1986.

"The Japanese people's main concern is when the leakage of radioactive substances will stop," said Goshi Hosono, a ruling party lawmaker and aide to embattled Prime Minister Naoto Kan.

At the weekend, plant operator Tokyo Electric Power Co (TEPCO) found a crack in a concrete pit at the No.2 reactor, generating readings of 1,000 millisieverts of radiation per hour in the air inside.

The leaks did not stop after concrete was poured into the pit, so TEPCO was turning to water-absorbent polymers to prevent more contaminated water escaping.

The crack may be one source of leaks that have sent radiation levels in the sea soaring to 4,000 times the legal limit.

To cool damaged reactor No. 2, engineers were looking at alternatives to pumping in water, including an improvised air conditioning system, spraying the reactor fuel rods with vaporized water or using the plant's cleaning system.

"We must not let our guard down as the situation at the nuclear plant is unpredictable," said Japan's chief cabinet secretary Yukio Edano, who has been the government's main public face since the March 11 disaster.

Under enormous pressure over its handling of the crisis and prior safety preparations, TEPCO confirmed on Sunday two of its employees missing since the March 11 disaster had been found dead in a basement, presumed killed by the tsunami.

Journalists peppered officials with questions over why the 21- and 24-year-old men's bodies had not been found earlier and how they came to die, while others survived, as they were checking installations after the quake.

Asia's biggest utility, TEPCO shares have fallen 80 percent during the crisis and its chief executive has been in hospital.

Several hundred Japanese protested against nuclear power at the company's headquarters in Tokyo on Sunday.

The damage from the 9.0 magnitude earthquake and ensuing tsunami that hit the northeast coast may top $300 billion -- the world's costliest natural disaster.

Farmers in the countryside surrounding the reactor are fretting that consumers in Japan will reject their crops, given their origin in Fukushima province.

"There is no way we will be able to sell anything," said 73-year-old farmer Akio Abiko. "People in Tokyo are just too sensitive about this kind of thing."

Some unhappy farmers came to Tokyo from Fukushima at the weekend, using Geiger counters to show their produce was safe.

Though more than three weeks have passed, about 164,000 people remain in evacuation centers. Harrowing stories are still emerging of just what happened when the tsunami hit.

Civil servant Takako Suzuki, 40, narrowly escaped when water rose to within a few inches from the ceiling of an evacuation center she had rushed too. "I was thinking 'if the water rises a little bit, I'm finished' - but fortunately the water suddenly stopped rising and began receding," she recounted to Reuters.

Suzuki spent a night huddled with 11 other survivors in the deep water, bodies floating around them.

Thousands of Japanese and U.S. soldiers have been conducting searches for bodies using dozens of ships and helicopters to sweep across land still under water along the northeast coast.

The teams hope when a large spring tide recedes it will be easier to spot bodies in a nation where proper treatment of the dead is paramount in Buddhist culture.

The consequences for the world's third largest economy are big. There is sure to be a short-term hit on gross domestic product, though the reconstruction push is expected to act as a stimulus and compensate that later in the year.

Japan's manufacturing slumped to a two-year low in March. Disruptions to its globally-renowned automobile and technology sectors have affected supply chains the world over.

(Additional reporting by Chizu Nomiyama and Ruairidh Villar in Tokyo, David Dolan in Fukushima and Damir Sagolj in Rikuzentakata; Writing by Paul Eckert and Andrew Cawthorne, editing by Jonathan Thatcher)