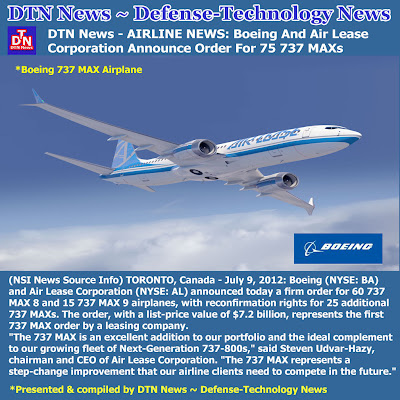 "The 737 MAX is an excellent addition to our portfolio and the ideal complement to our growing fleet of Next-Generation 737-800s," said Steven Udvar-Hazy, chairman and CEO of Air Lease Corporation. "The 737 MAX represents a step-change improvement that our airline clients need to compete in the future."
The 737 MAX is a new-engine variant of the world's best selling airplane and builds on the strengths of today's Next-Generation 737. The 737 MAX incorporates the latest-technology CFM International LEAP-1B engines to deliver the highest efficiency, reliability and passenger comfort in the single-aisle market.
Airlines operating the 737 MAX will see a 13 percent fuel burn improvement over today's most fuel efficient single-aisle airplanes and an eight percent operating cost per seat advantage over tomorrow's competition.
"This 737 MAX order continues ALC's disciplined approach to building its young, fuel-efficient fleet," said Boeing Commercial Airplanes President and CEO Ray Conner. "The ALC leadership team has an excellent record of placing Boeing airplanes with airlines worldwide. They are an ideal partner to help establish the 737 MAX in the leasing market."
The ALC order builds on the continued market success of the 737 MAX. To date, the 737 MAX has orders and commitments for more than 1,000 airplanes.
ALC has ordered a total of 170 airplanes from Boeing including 75 737 MAX, 78 Next-Generation 737-800s, five 777-300ERs (Extended Range) and 12 787-9 Dreamliners.
About Air Lease Corporation (NYSE: AL)
ALC is an aircraft leasing company based in Los Angeles, California, that has airline customers throughout the world. ALC and its team of dedicated and experienced professionals are principally engaged in purchasing commercial aircraft and leasing them to its airline partners worldwide through customized aircraft leasing and financing solutions. For more information, visit ALC's website atwww.airleasecorp.com.
Contact:
Tim Bader
North America and Leasing Communications
+1 425-717-0672
Tim.s.bader@boeing.com
www.boeing.com
More information: http://www.boeing.com/newairplane//737max/
Photo and caption are available here: http://boeing.mediaroom.com
SOURCE Boeing
*Link for This article compiled by Roger Smith from reliable sources Boeing*Speaking Image - Creation of DTN News ~ Defense Technology News *This article is being posted from Toronto, Canada By DTN News ~ Defense-Technology News Contact:dtnnews@ymail.com ©COPYRIGHT (C) DTN NEWS DEFENSE-TECHNOLOGY NEWS

Source: DTN News - - This article compiled by Roger Smith from reliable sources By: Hanan Greenberg - Almonitor
(NSI News Source Info) TORONTO, Canada - July 9, 2012: Not long ago, a thick cloud of rumors settled on the new, much-talked-about IDF [Israel Defense Forces] acquisition of 20 F-35's, a fighter plane known as the Stealth produced by the American Lockheed Martin Company. There were rumors regarding production slowdowns and delays of the F-35, known as the “fifth generation fighter plane” (in contrast to the Israeli fourth-generation F-16's). The fear is that they will reach Israel very late — too late to serve the IDF in coping with future challenges. 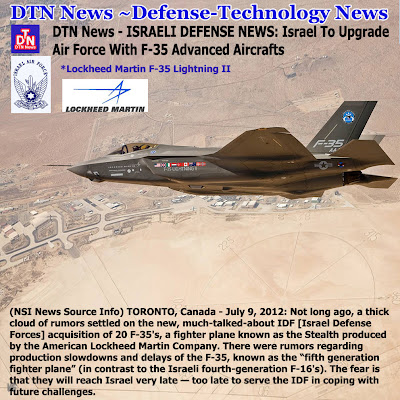 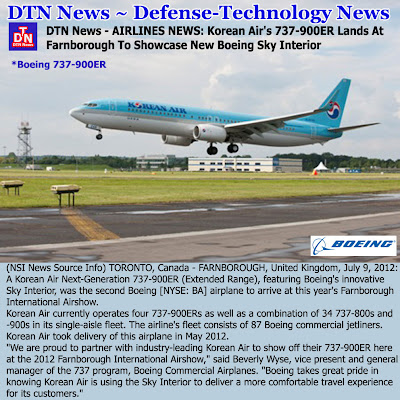 "We are proud to partner with industry-leading Korean Air to show off their 737-900ER here at the 2012 Farnborough International Airshow," said Beverly Wyse, vice present and general manager of the 737 program, Boeing Commercial Airplanes.
"Boeing takes great pride in knowing Korean Air is using the Sky Interior to deliver a more comfortable travel experience for its customers."
"The 737 Boeing Sky Interior is helping airlines like Korean Air to differentiate themselves from their competitors," Wyse said.
"Passengers instantly see and feel the difference." Those differences include sculpted sidewalls and window reveals, LED lighting, larger stow bins and more intuitive placement of attendant call and light buttons.
Korean Air currently operates four 737-900ERs as well as a combination of 34 737-800s and -900s in its single-aisle fleet. The airline's fleet consists of 87 Boeing commercial jetliners. Korean Air took delivery of this airplane in May 2012.

The 737-900ER, which was called the 737-900X prior to launch, is the newest addition and the largest variant of the Boeing 737 line and was introduced to meet the range and passenger capacity of the discontinued 757-200 and to directly compete with the Airbus A321.
An additional pair of exit doors and a flat rear pressure bulkhead increase seating capacity to 180 passengers in a 2-class configuration or 215 passengers in a single-class layout. Additional fuel capacity and standard winglets improve range to that of other 737NG variants.
The first 737-900ER was rolled out of the Renton, Washington factory on August 8, 2006 for its launch customer, Lion Air. Lion Air received this aircraft on April 27, 2007 in a special dual paint scheme combining the Lion Air lion on the vertical stabilizer and the Boeing livery colors on the fuselage. Lion Air has orders for 166 737-900ERs as of August 2011.
On August 22, 2011, it was reported that Delta Air Lines had placed an order for 100 737-900ERs, the largest single order for the type.
A total of 52 -900s, 82 -900ERs, and 6 -900 BBJs have been delivered with 183 unfilled orders as of January 2011. 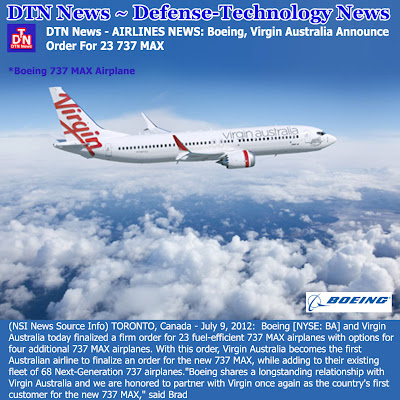 With this order, Virgin Australia becomes the first Australian airline to finalize an order for the new 737 MAX, while adding to their existing fleet of 68 Next-Generation 737 airplanes.

"Boeing shares a longstanding relationship with Virgin Australia and we are honored to partner with Virgin once again as the country's first customer for the new 737 MAX," said Brad McMullen, Vice President of Japan & Oceania Sales, Boeing Commercial Airplanes. "The 737 MAX will provide passengers with unrivaled comfort as well as tremendous economics and reliability to Virgin Australia's growing operations," McMullen said.
The 737 MAX will deliver the big savings in fuel that airlines want. Powered by the CFM International LEAP-1B engines, it reduces fuel use by an additional 13 percent over today's most fuel-efficient single-aisle airplanes. The 737 MAX's more efficient structural design, less engine thrust and less required maintenance also add up to substantial cost advantages for customers. The 737 MAX 8 will have the lowest operating costs in the single-aisle segment, with an eight percent per-seat advantage over its competitor.
Virgin Australia established its operations in Australia with two Boeing 737 airplanes in August 2000. The airline operates a mix of 73 narrow and wide body Boeing airplanes.Ailerons for all Boeing 737 airplanes are manufactured in Australia by Boeing Aerostructures Australia.Since 2006, Boeing has discussed replacing the 737 with a "clean sheet" design (internally named "Boeing Y1") that could follow the Boeing 787 Dreamliner. A decision on this replacement was postponed, and delayed into 2011.
In 2010, Airbus launched the Airbus A320neo, a single-aisle jet aircraft which incorporated a new engine to improve fuel burn and operating efficiency. The decision was met with positive reaction by many airlines, which began making major orders for the improved aircraft, notably from AirAsia and IndiGo. This put pressure on Boeing and on August 30, 2011, Boeing's board of directors approved the Boeing 737 MAX project. Boeing claims the 737 MAX will provide a 16% lower fuel burn than the current Airbus A320, and 4% lower than the Airbus A320neo.


Boeing expects the 737 MAX to meet or exceed the range of the Airbus A320neo. The first of new variant is scheduled to be delivered in 2017.
The three variants of the new family are the 737 MAX 7, the 737 MAX 8 and the 737 MAX 9, which are based on the 737-700, −800 and −900ER, respectively. which are the best selling versions of the 737 Next Generation family. Boeing has stated that the fuselage lengths and door configurations from the Boeing 737 Next Generation family will be retained on the 737 MAX variants.
Initially, the customers for the 737 MAX were not disclosed, except for American Airlines. On November 17, 2011, Boeing released the names of two other customers - Lion Air and Aviation Capital Group. At that time, Boeing reported 700 commitments from 9 customers for the 737 MAX. On December 13, 2011, Southwest Airlines announced they would be the launch customer for the 737 MAX with a firm order of 150 aircraft and 150 options. In December 2011, Boeing has 948 commitments and firm orders from 13 customers for the 737 MAX.Norwegian Air Shuttle has announced in January 2012 an order for 100 Boeing 737 MAX airliners, along with 22 Boeing 737-800 and 100 Airbus A320neo aircraft. This is the first European order for the 737 MAX and the entire order is valued at $11.4 billion. In July 2012, Virgin Australia announced an agreement to order 23 Max aircraft.