Source: DTN News - - This article compiled by Roger Smith from reliable sources Airbus
(NSI News Source Info) TORONTO, Canada - December 16, 2011: Airbus delivered today its 7,000th aircraft, an A321, to US Airways – the airline that operates the largest fleet of Airbus aircraft in the world – from the Airbus facility in Hamburg, Germany. This milestone comes just two years after the delivery of Airbus’ 6,000th aircraft which underlines the continued vibrancy of the commercial aviation sector and the market’s clear vote for eco-efficient aircraft.
The 1,000th Airbus delivery was an A340-300 that went to Air France in 1993, nineteen years after the first Airbus aircraft was delivered – an A300B2 also to Air France, in 1974. 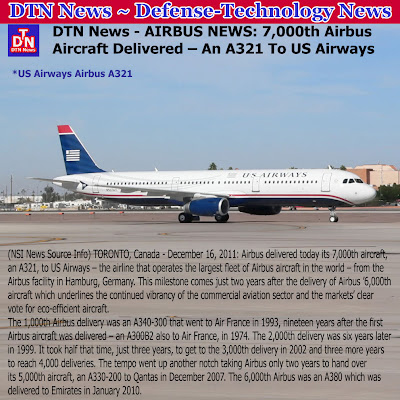 The 2,000th delivery was six years later in 1999. It took half that time, just three years, to get to the 3,000th delivery in 2002 and three more years to reach 4,000 deliveries. The tempo went up another notch taking Airbus only two years to hand over its 5,000th aircraft, an A330-200 to Qantas in December 2007. The 6,000th Airbus was an A380 which was delivered to Emirates in January 2010.
"It’s particularly fitting that our 7,000th aircraft is an A321 going to US Airways. The airline not only operates the largest fleet of Airbus aircraft in the world; with over 220 A320 Family aircraft flying in US Airways colours today, they also operate the largest fleet of our best-selling, eco-efficient A320 Family," said Tom Enders, Airbus President and CEO. "This milestone is a tribute to the hard work and commitment of Airbus teams around the world. We have improved efficiencies company-wide and this has enabled us to deliver record numbers of latest generation aircraft at continually increasing rates, with an environmental footprint ever decreasing."
"Airbus has been a long-term strategic partner to US Airways. Today we celebrate a significant milestone in Airbus’ history," said US Airways’ Chief Executive Officer, Douglas Parker. "It is an honor to be the recipient of their 7,000th delivery. On behalf of the 32,000 employees at US Airways, we applaud this tremendous accomplishment and look forward to a continued successful partnership."
By the end of the year, US Airways will operate a fleet of 93 A319s, 72 A320s, 63 A321s and 16 A330s. The airline also has firm orders for an additional 58 A320 Family aircraft, eight A330 aircraft and 22 A350 XWBs on backlog.
Over 8,200 A320 Family aircraft have already been ordered and more than 4,900 delivered to more than 340 customers and operators worldwide reaffirming its position as the world’s best-selling single-aisle aircraft family. The A320neo has over 95 percent airframe commonality with the current A320, making it an easy fit into existing fleets while offering up to 500 nautical miles (950 kilometres) more range or two tonnes more payload at a given range.

THE MONTH IN REVIEW: NOVEMBER 2011

Airbus maintained its sales and delivery pace in November, booking 149 orders for its A320, A330 and A380 jetliner families, while delivering 59 aircraft from these three product lines.

The A320neo new engine option for Airbus’ best-selling A320 Family once again led the month’s new business, with orders coming from key customers in the Middle East, United States and Europe.

ALAFCO, the Kuwait-based international aviation lease and finance company, ordered 50 A320neo jetliners, stating that this fuel-efficient new version was an absolute “must have” for its portfolio.

Qatar Airways selected the A320neo as the reference aircraft for expansion of its short- to medium-haul fleet, ordering all three aircraft types offered in this latest version: 30 A320neos, 14 A321neos and six A319neos.

Additionally, Aviation Capital Group – the United States-based global aircraft leasing company – signed a purchase agreement for 30 A320neo aircraft, while Transaero became the A320neo’s first customer in Russia and CIS with its order for eight of the jetliners.

With these bookings, firm orders for the A320neo Family reached 1,196, ordered by a total of 21 customers.

In other new business for November, Qatar Airways became the latest Airbus customer to place a repeat order for the A380 – adding five of the 21st century flagship airliners to its five already on contract.   This brings total A380 orders to 243 from 18 customers.

Completing the month’s bookings were Hawaiian Airlines’ order for five more A330-200s – which will support the continued expansion of its network and replace the carrier’s current 767-300s; and BOC Aviation’s contract for an A330-300.

The sustained delivery cadence continued in November, with Airbus providing nearly two new aircraft per day.  Its deliveries were composed of 45 A320 Family jetliners, 11 A330s (including another of the new A330-200F freighters), and three A380s (one each to Korean Air, Emirates and Qantas).  As a result, Airbus delivered a total of 477 aircraft to 84 customers in 2011 through the end of November, compared to 461 during the same 11-month period last year.

Review the worldwide Airbus orders and deliveries totals with the summary table, below.  For a full listing, utilise the link underneath the summary table to download the latest Excel file – which is updated monthly and lists all firm commercial aircraft transactions, including the family of Airbus executive and private aviation jetliners.