Lockheed Martin Corp., Orlando, Fla., was awarded a $10,010,466 contract modification which will provide for upgrade/retrofit of five gunship multi-spectral sensor systems. At this time, the entire amount has been obligated. ASC/WISK, Wright-Patterson Air Force Base, Ohio, is the contracting activity (FA8629-08-C-2402; P00017).

Lockheed Martin Mission Systems & Sensors, Moorestown, N.J., is being awarded a $38,893,503 modification to previously awarded contract (N00024-00-C-5139) for the personnel, facilities and support services necessary to operate the Aegis Depot Operations Center, including associated technical, engineering, and logistics services in support of the Aegis Weapon System (AWS) and Aegis Combat System. This contract is for AWS integrated logistics support and lifetime sustainment support. It allows for the sustainment and support of the installed AWS as the primary anti-air-warfare and ballistic missile defense system for the fleet. The program requires long range sustainment services to support the development, upgrades and acquisition of the AWS and to ensure lifetime sustainment and supportability is in place for the fleet as the major upgrades are installed and supported throughout their lifecycle. Work will be performed in Moorestown, N.J., and is expected to be completed by October 2011. Contract funds in the amount of $7,778,700 will expire at the end of the current fiscal year. The Naval Sea Systems Command, Washington, D.C., is the contracting activity.

EDO Western Corp., Salt Lake City, Utah, is being awarded a $10,572,842 indefinite-delivery/indefinite-quantity, firm-fixed-price, cost-plus-fixed fee contract for the manufacture of TR-302 transducers for Navy submarines. Efforts will include manufacture, test, inspection, packaging, and delivery of TR-302 first article transducers, drawings, technical repair standards and up to a maximum of 50 production transducers per year for five years. An additional line item for engineering services is included in the award to perform design and trade-off studies, engineering change development, reliability studies, repair and refurbishment studies, failure analysis studies, and logistic analyses. The government will request and award specific studies through individual task orders. Work will be performed in Salt Lake City, Utah, and is expected to be completed by October 2015. Contract funds will not expire at the end of the current fiscal year. The contract was competitively procured via the Naval Electronic Commerce Online website, with four offers were received. The Naval Undersea Warfare Center Division, Newport, R.I., is the contracting activity (N66604-11-D-0158).

SeeByte, Ltd., Edinburgh, Scotland, is being awarded an $8,973,290 modification to previously awarded contract (N00174-09-D-0001) to exercise option two for Common Operator Interface command and control software for Navy explosive ordnance disposal teams. The software application is used for mission planning, equipment data transfer, mission execution tracking, post mission analysis, and data reporting by Navy explosive ordnance disposal mobile units, mobile diving and salvage units, and research and development activities. Work will be performed in Edinburgh, Scotland, and is expected to be completed by December 2013. Contract funds will not expire at the end of the current fiscal year. The Naval Surface Warfare Center, Indian Head, Md., is the contracting activity. 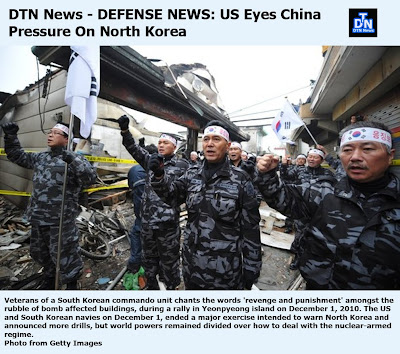 "I think the Chinese have a duty and an obligation to greatly press upon the North Koreans that their belligerent behavior has to come to an end," White House spokesman Robert Gibbs told reporters.

"And I think you?ll see progress on multilateral discussions around this over the next few days," Gibbs said.

Gibbs did not elaborate, but diplomats said that South Korean and Japanese envoys were likely to travel to Washington in the coming week for talks with the United States on the North Korean tensions.

China on Sunday proposed emergency six-nation talks on North Korea. But the United States and Japan rejected the idea, saying that talks would be pointless without signs of movement from Pyongyang.

North Korea on Tuesday boasted of running thousands of nuclear centrifuges, one week after killing four people in its first shelling of a civilian area in the South since the 1950-53 Korean War.

"We remain committed to the common security of our allies in the Republic of Korea," Gibbs said, referring to South Korea by its official name.

China is the main diplomatic and economic supporter of impoverished North Korea, which has defied the world with two nuclear weapons tests since 2006.

But sensitive US cables released Monday by whistle-blower site WikiLeaks said that China doubted its own influence over Pyongyang and seemed increasingly likely to accept a North Korea absorbed by the democratic South.

Escalation of Korean tensions must be prevented: China

Pakistan and North Korea live on the edge

Globe and Mail - Ramesh Thakur - ‎38 minutes ago‎
Two of the world's most heavily militarized and nuclearized high-threat theatres are the Korean Peninsula and South Asia. The world has been reminded twice ...

Voice of America - Steve Herman - ‎40 minutes ago‎
As the US and South Korean joint naval exercise wraps up, South Korean military officials say they are discussing holding more maneuvers with the US forces ...

CNN International - Tim Schwarz - ‎51 minutes ago‎
By the CNN Wire Staff US Navy crewman on the deck of the USS George Washington during a joint military exercise with South Korea, Nov. 30, 2010. ...

Seoul to study leaked US documents

Korea Times - Kang Hyun-kyung - ‎1 hour ago‎
Seoul will study the leaked US diplomatic documents after receiving them from the US government, a government official said Thursday. ...

Bloomberg - ‎1 hour ago‎
By Bloomberg News - Wed Dec 01 08:52:36 GMT 2010 China repeated its call for calm and restraint on the Korean peninsula as a US aircraft carrier patrolled ...

NPR - ‎1 hour ago‎
by AP Enlarge AP South Korean sailors arrive at a port in Yeonpyeong Island, South Korea, by a boat from their naval ships anchored temporarily in the ...

Korea Times - Kang Hyun-kyung - ‎1 hour ago‎
Despite North Korea's heavy reliance on China for trade and materials needed for its people's daily lives, the country that can have real ...

WikiLeaks website brought down in US and Europe by 'powerful' cyber attack...

Daily Mail - ‎2 hours ago‎
By Daily Mail Reporter The WikiLeaks website today said that it was under a forceful internet-based attack with the site inaccessible to users in US and ...

Beware the hot air from Beijing

Vancouver Sun - Jonathan Manthorpe - ‎2 hours ago‎
China is not alone, of course, in keeping a stable of culturally attuned officials on hand to ...

Vancouver Sun - ‎2 hours ago‎
A US navy crew member stands on deck as a F-18 Super Hornet fighter plane takes off from the USS George Washington during joint US and South Korea military ...