Source: DTN News - - This article compiled by Roger Smith from reliable sources Pictures of The Day & The Guardian
(NSI News Source Info) TORONTO, Canada - July 30, 2013: North Korean leader Kim Jong-Un laughing during a photo session with war veteran delegates who took part in the celebrations marking the 60th anniversary of the signing of the truce in the Korean War. 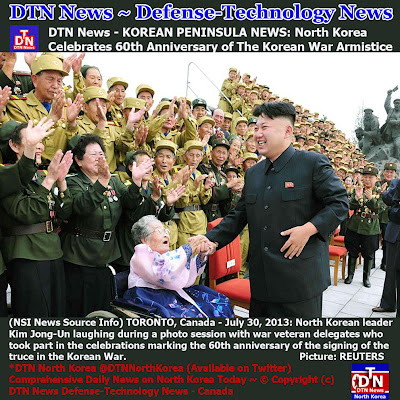 North Korea has marked the 60th anniversary of the truce that ended the Korean war with a lavish and painstakingly choreographed military parade through Pyongyang's main square and a solemn gathering led by Kim Jong-un at a newly opened war museum.

The parade, which also included floats and thousands of civilians waving colourful fake flowers, appeared to offer more flash and pageant than new revelations of the secretive North's military capabilities, though one unit prominently carried kits marked with the bright yellow nuclear symbol, a reminder of the North's claims that it is preparing itself against a nuclear attack by the United States and is developing a nuclear arsenal of its own.

The extravagant assembly of weapons and goose-stepping troops, reminiscent of the marches held by the Soviet Union and China at the height of the cold war, offered a rare chance to see North Korea's military up close.

Overlooking a sea of spectators cheering and waving in Kim Il-sung Square, Kim Jong-un saluted his troops from a review stand. He was flanked by senior military officials, the chests of their olive-green-and-white uniforms laden with medals. As fighter jets screamed overhead, a relaxed-looking Kim smiled and talked to the vice-president of China, the country that fought alongside North Korea during the war and is Pyongyang's only major ally and a crucial source of economic aid. Kim did not make a speech.

Saturday's parade marked a holiday the North Koreans call Victory Day in the Fatherland Liberation War, although the 1950-53 Korean war ended in a truce and the Korean peninsula remains technically at war.

In Washington, the US president, Barack Obama, marked the day with a speech at the Korean war veterans' memorial on the National Mall, saying the anniversary marked the end of the war and the beginning of a long and prosperous peace.

"Here today, we can say with confidence, that war was no tie. Korea was a victory," with 50 million South Koreans living in freedom and "a vibrant democracy" in stark contrast to dire conditions in the North, Obama said.

He said the US-South-Korean partnership remained "a bedrock of stability" throughout the Pacific region, and gave credit to the US service members who fought all those years ago and to the men and women currently stationed there.

Chang Yong-seok, a researcher at Seoul National University, said North Korea intended to use the anniversary to highlight Kim Jong-un's leadership. "It was a political performance meant to show off that Kim Jong-un remains powerful and strong," he said.

Chang said Kim standing by the side of China's vice-president was a reminder of the cold war when North Korea and China stood against South Korea and the US. It also indicated that North Korea wanted to demonstrate that its ties with China were on a path to recovery, which could send a message to the US. 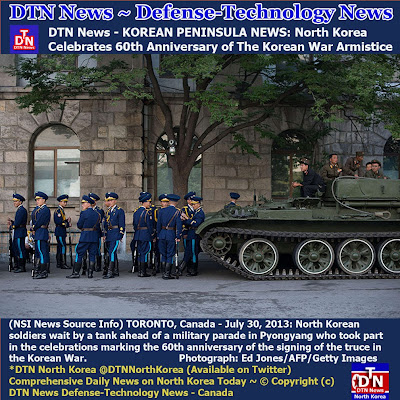 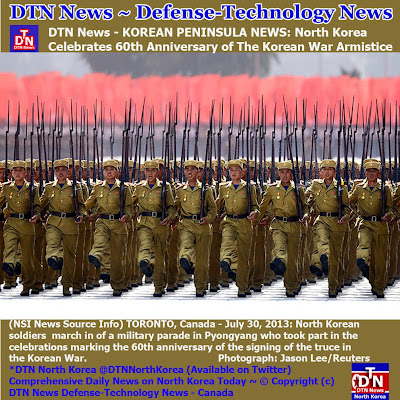 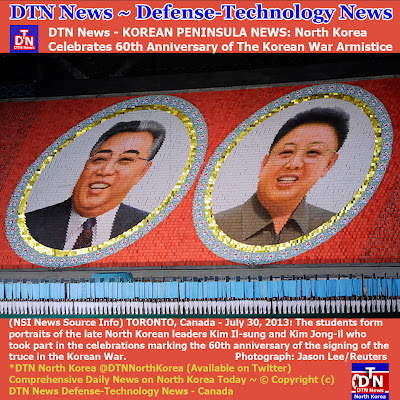 "The fact that China's vice-president was standing next to Kim Jong-un could have a symbolic meaning. North Korea joining hands with China against South Korea, Japan and the US reminds of the cold war era. North Korea probably wanted to show off that its relationship with China is improving," Chang said. "It is like telling the US that even if you don't want to talk to us, you'll end up having dialogue with us."

Kim's rule, which began in late 2011 after the death of his father, Kim Jong-il, has been marked by high tensions with Washington and Seoul. He has overseen two long-range rocket launches and a nuclear test that drew widespread condemnation and tightened UN sanctions.

North and South Korea have turned to tentative diplomacy in recent weeks, but in March and April there were North Korean threats of nuclear war against Washington and Seoul in response to annual South-Korean-US military drills, and UN condemnation of Pyongyang's nuclear test in February. Long-stalled North Korean nuclear disarmament talks show no sign of resuming.

Last year's parade in Pyongyang, held in April to commemorate the 100th birthday of the late national founder, Kim Il-sung, Kim Jong-un's grandfather, created a buzz among military watchers when the North rolled out a mysterious long-range missile known abroad as the KN-08. Most outside observers now believe the missiles were mock-ups, but they were carried on mobile launchers that appeared to have been obtained from China, possibly against UN arms trade sanctions.

Meanwhile, in South Korea, the president, Park Geun-hye, vowed she would not tolerate provocations from North Korea. "I urge North Korea to give up the development of nuclear weapons if the country is to start on a path towards true change and progress," Park said in a speech.

North Korea is estimated to have a handful of crude nuclear bombs, but many analysts do not think it has yet mastered the technology needed to build warheads small enough to fit on long-range missiles.

The North's parade tradition goes back to the founding of the country in 1948. Few countries including North Korea's communist models continue to trot out their military forces in public squares with such pomp and pageantry. But Pyongyang has stuck with them because its leaders believe they are a good way to show the world those things about the military they want to reveal, while at the same time sending a potent message domestically about the power of the ruling elite.


"The beauty of a parade is that weapons systems don't actually have to work in order to be impressive – a missile launcher looks good even when the missile won't launch," said David Stone, an expert on the Soviet and Russian militaries at Kansas State University. 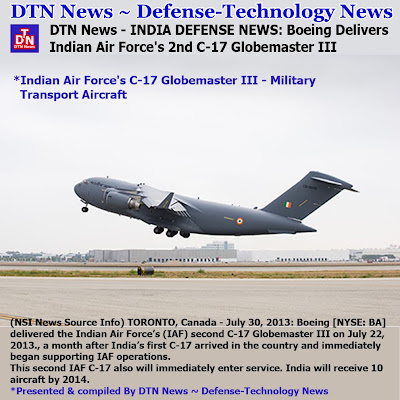 "Our first C-17 Globemaster III not only signifies a tremendous boost in our strategic airlift capability, but also is poised to form a major component in the IAF's modernization drive,” said Air Chief Marshal NAK Browne, Chief of the Indian Air Force. “Because it was delivered mission-ready, it soon undertook its first strategic mission to our Andaman Nicobar Command at Port Blair. I wish to place on record my appreciation to the U.S. government, the U.S. Air Force and the Boeing team for the timely delivery of the aircraft that makes the IAF the world's second-largest operator of the C-17 after the U.S."
Boeing is on schedule to deliver three more IAF C-17s this year and five in 2014. The C-17 can operate in extreme climates, transport large payloads across vast ranges and land on short, austere runways.
“C-17s have an important role in supporting unique Indian Air Force operations in remote locations such as the Himalayas and desert environments," said Nan Bouchard, Boeing vice president and C-17 program manager. "The C-17 provides the versatility to complete any mission, anywhere. We look forward to working with the Indian Air Force and the U.S. Air Force as we deliver the remainder of India’s fleet."
Boeing is supporting the IAF aircraft through the Globemaster III Integrated Sustainment Program (GISP) Performance-Based Logistics contract. The GISP “virtual fleet” arrangement ensures mission readiness by providing all C-17 customers access to an extensive support network for worldwide parts availability and economies of scale.
Boeing has delivered 255 C-17s, including 222 to the U.S. Air Force, and a total of 33 to Australia, Canada, India, Qatar, the United Arab Emirates, the United Kingdom and the 12-member Strategic Airlift Capability initiative of NATO and Partnership for Peace nations.
A unit of The Boeing Company, Boeing Defense, Space & Security is one of the world's largest defense, space and security businesses specializing in innovative and capabilities-driven customer solutions, and the world’s largest and most versatile manufacturer of military aircraft. Headquartered in St. Louis, Boeing Defense, Space & Security is a $33 billion business with 59,000 employees worldwide. Follow us on Twitter: @BoeingDefense.
Contact:
Cindy Anderson
Mobility, Surveillance and Engagement
Office: +1 562-593-4477
Mobile: +1 562-253-5818
cindy.a.anderson@boeing.com
Tiffany Pitts
Mobility, Surveillance and Engagement
Office: +1 562-593-2216
Mobile: +1 714-329-3027
tiffany.l.pitts@boeing.com