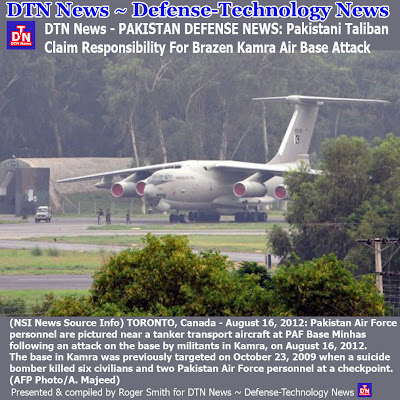 "We have killed scores of security personnel. We are proud of this operation. Our leadership had decided to attack Kamra base a long time ago," The Dawn quoted Ehsan, as saying.
"Nine of our men entered the base, four from one side and five from the other... They got together and launched the operation," Ehsan said, adding that they have damaged three JF-17 thunder aircrafts.
Ehsan said the attack was a revenge for the deaths of Baitullah Mehsud and Osama Bin Laden, adding that they "will continue the attacks on the military installments until the establishment of Islamic rule in the country".
He also confirmed the death of all nine TTP men who attacked the base.
During the early hours of Thursday, heavily armed militants stormed the PAF Minhas airbase sparking an intense gun battle lasting almost five hours.
The militants were said to be armed with automatic weapons, grenades and suicide vests. Intense exchange of fire between militants and security forces ensued after the attackers infiltrated the base, located in Attock, Punjab.
One Pakistani soldier, Muhammad Asif, also lost his life in the attack, the officials added.
Kamra is located about 70 kms from the Pakistani capital Islamabad. The Minhas airbase is a heavily guarded compound with the Pakistan Air Force's Kamra Aeronautical Complex in its vicinity, where Pakistan assembles and overhauls JF-17 Thunder fighter jets in collaboration with China.
This is not the first time that Kamra has been the target of a militant attack. On Oct 23, 2009, a suicide bomber blew himself up at the entrance of the Pakistan Aeronautical Complex in Kamra. Two security officers and six other people were killed in the attack. (ANI)