DynCorp International, Fort Worth, Texas, is being awarded a $92,866,122 cost-plus-fixed-fee contract to provide organizational level maintenance and logistic support on all aircraft and support equipment for which the Naval Test Wing Atlantic has maintenance responsibility. This maintenance responsibility includes all rotary, fixed, lighter-than-air, and unmanned aircraft on-site for project testing, transient aircraft, loaner aircraft, leased aircraft, and tested civilian aircraft assigned to the Naval Air Warfare Center Aircraft Division, Patuxent River, Md. In addition, labor and services will be provided to perform supportability/safety studies and off-site aircraft safety/spill containment patrols and aircraft recovery services. Work will be performed in Patuxent River, Md., and is expected to be completed in July 2012. Contract funds will not expire at the end of the current fiscal year. The contract was competitively procured via an electronic request for proposal, with two offers received. The Naval Air Systems Command Patuxent River, Md., is the contracting activity (N00421-11-C-0033).

Fortistar Methane Group, White Plains, N.Y., is being awarded a $42,700,317 firm-fixed-price contract for bundled renewable energy at Marine Corps Air Station (MCAS) Miramar. The work to be performed is to purchase up to three megawatts of electricity for 15 years, which provides strategic security by reducing our reliance on fossil fuels and helping the Department of Navy achieve energy goals. The renewable resource to be utilized is the landfill gas from the MCAS Miramar landfill. Work will be performed in San Diego, Calif., and is expected to be completed by January 2027. Contract funds will not expire at the end of the current fiscal year. Market survey/sources sought for this acquisition was published on Feb. 19, 2008. The market survey/sources sought denoted only one responsive offeror: Fortistar Methane Group. A justification and approval for sole-source to Fortistar Methane Group for the procurement of 25,000 MWH annually of renewable electrical power delivered to MCAS Miramar was approved on Sept. 23, 2010. The Naval Facilities Engineering Command, Southwest, San Diego, Calif., is the contracting activity (N62473-11-C-3803).

General Dynamics, National Steel and Shipbuilding Co., San Diego, Calif., is being awarded a $28,841,256 modification to previously awarded contract (N00024-08-C-4410) for the USS Harpers Ferry (LSD 49) fiscal 2011 extended docking phased maintenance availability. An extended docking phased maintenance availability provides for an extensive renovation and modernization of an LSD-class ship, including alterations and repairs as well as inspection and testing to all ships systems and components ensuring safe and dependable operation of the ship. Work will be performed in San Diego, Calif., and is expected to be completed by July 2012. Contract funds in the amount of $28,841,256 will expire at the end of the current fiscal year. The Southwest Regional Maintenance Center, San Diego, Calif., is the contracting activity.

BAE Systems Land & Armaments, L.P., Minneapolis, Minn., is being awarded a $7,650,242 indefinite-delivery/indefinite-quantity contract for technical, logistical, and engineering research and development efforts in support of 25mm, 57mm, 155mm, and five-inch Navy surface gun weapon systems that are in service or in development. BAE Systems Land & Armaments is the sole designer, developer, and producer of medium and large caliber naval gun systems. Specialized technical, logistical, and engineering support will be procured for 25mm, 57mm, and five-inch naval gun weapons systems (GWS) being developed and maintained by the Naval Surface Warfare Center, Dahlgren Division (NSWCCD). BAE Systems Land & Armaments will provide the following research and developmental services, documentation, and materials to assist NSWCDD in its efforts: analysis and documentation of the GWS performance, including its interoperability and compatibility with existing and modified systems; studies, reports, and written recommendations pertaining to engineering requirements, system design, system integration and modifications, upgrades, and change proposals; analysis, written evaluations, and change proposals surrounding the resolution of GWS design and performance issues and/or failures; GWS test plans and equipment, as well as test analysis, trouble shooting, repair, and maintenance reports; investigations, experiments, and proof of concept demonstrations and documentation related to developed GWS technology; analysis, written evaluations, and change proposal documentation implementing integrated logistic support solutions; and ammunition and ammunition components in support of the these efforts. Work will be performed in Minneapolis, Minn., and is expected to be completed by July 2016. Contract funds in the amount of $48,862 will expire at the end of the current fiscal year. This contract was not competitively procured. The Naval Surface Warfare Center, Dahlgren Division, Dahlgren, Va., is the contracting activity (N00178-11-D-1004).

Sysco Hampton Roads, Suffolk, Va., was awarded a firm-fixed-price contract with a maximum $48,368,811 for prime vendor food and beverage support. There are no other locations of performance. Using services are Army, Navy, Air Force, Marine Corps and federal civilian agencies. The date of performance completion is June 29, 2012. The Defense Logistics Agency Troop Support, Philadelphia, Pa., is the contracting activity (SPM200-11-D-3474).

Labattt Food Service, San Antonio, Texas, was awarded a fixed-price with economic price adjustment contract with a maximum $51,318,750 for prime vendor full line food service distribution. There are no other locations of performance. Using services are Army, Navy, Air Force, Coast Guard and federal civilian agencies. The date of performance completion is May 12, 2012. The Defense Logistics Agency Troop Support, Philadelphia, Pa., is the contracting activity (SPM200-11-D-3459). 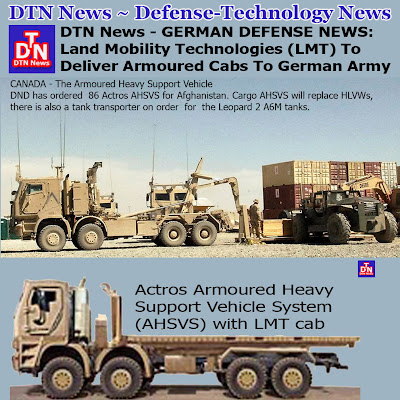 (NSI News Source Info) TORONTO, Canada July 12, 2011: Pretoria-based Land Mobility Technologies (LMT) will next week start delivering armoured cabs to Mercedes Benz Special Trucks in Germany for fitting to a undisclosed number of Actros heavy recovery vehicles ordered for immediate use by German troops in Afghanistan.
The cabs are being manufactured by LMT at its Waltloo factory.
The company says it received the contract in March 2011. Mercedes Benz, announcing the order in May, said the supply of the vehicles “will substantially enlarge the capabilities of the Bundeswehr.”
The companies say the vehicles will be of the same configuration and with the same high level of protection as the 120 successfully operated by the Canadian Forces in Afghanistan since March 2008.
“The vehicles will ensure the best available protection in wheeled logistics vehicles for the German soldiers in operation, Mercedes Benz said in its may statement.
“With the heavily-armoured Actros 4151 AK 8x8, Mercedes-Benz is setting new standards in special-purpose logistics vehicles. The Actros provides Level 4 ballistic protection and Level 4b mine protection according to STANAG 4569. Thanks to its extremely effective armour against blasts and shrapnel, the Actros is also setting standards when it comes to protection against IED's and car bombs.
“The systems of the heavily-armoured Actros 4151 AK 8x8 have been further optimised on the basis of many years of experience. Thanks to their excellent cab protection, high-performance chassis and tried-and-tested bodies, the vehicles are able to offer a deployment availability of over 95%.”
Mercedes Benz adds the armoured cab can be tilted forward so as to guarantee access to the engine compartment, which is also armoured. A new seating system with 5-point seat belts provides the optimum basis for protecting the occupants against attack, including from the side. At the same time the seats offer both secure support when driving off-road as well as good freedom of movement.
A high-performance air conditioning system helps to ensure optimum temperatures are maintained, even in extreme climatic conditions. 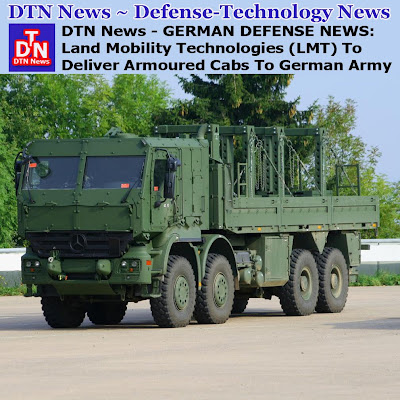 A particular challenge faced by heavy recovery vehicles is the distribution of axle loads in all deployment situations - from heavy-duty recovery applications through to driving when empty. While the weight of the armoured cab lies across the front axles only, in recovery situations the weight of the raised, towed vehicle places a load on the rear axles which can act like a huge lever.
The Actros 4151 AK 8x8 Recovery vehicle, however, has been designed in such a way as to ensure a substantially uniform axle load distribution and also enable safe handling in both heavy-duty recovery situations and also when driving unladen, the company says.
The protected Special Vehicle has a weight of 33.500 kg, a length of 10.530 mm, a width of 2.800 mm and a height of 3.400 mm. The wheelbase of the Mercedes-Benz Actros 8x8 is 5.580 mm. The BlueTec 5-V8-engine of the type OM 502 LA has a power of 375 kW/ 510 hp.
The recovery technology consists of the wreckerbody made bei Empl, three Rotzler-winches and a Hiab-front-crane. The Rotzler-winches have a max. tractive power of 25 to with a cable-length of 100 m. The Hiab-crane has a lifting capacity of 7.500 kg with 2,60 m. The arm of the Empl-wrecker has a lifting height of 5m and a lifting capacity of 16 metric tons. The wrecker capacity while driving is more than 12mt.
Land Mobility Technologies (LMT) - Products 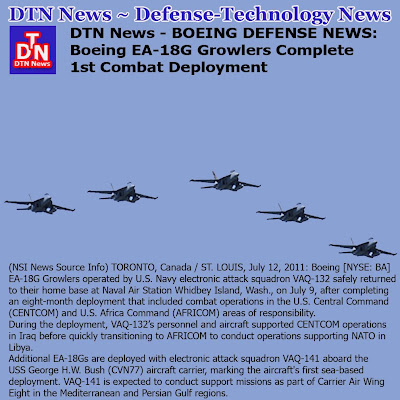 During the deployment, VAQ-132’s personnel and aircraft supported CENTCOM operations in Iraq before quickly transitioning to AFRICOM to conduct operations supporting NATO in Libya.
Additional EA-18Gs are deployed with electronic attack squadron VAQ-141 aboard the USS George H.W. Bush (CVN77) aircraft carrier, marking the aircraft's first sea-based deployment. VAQ-141 is expected to conduct support missions as part of Carrier Air Wing Eight in the Mediterranean and Persian Gulf regions.
A third electronic attack squadron, VAQ-138, recently deployed to a land-based location.
"It's a very exciting accomplishment for the Navy and for our nation to have the Growler in the fleet -- on time, on cost, and with the performance that was expected. What we're hearing from the fleet is that the young lieutenants and lieutenant commanders who are flying the aircraft are, just as we thought, taking advantage of the capabilities of the Block 2 Super Hornet to make the jet more effective," said Capt. Mark Darrah, F/A-18 and EA-18G program manager (PMA-265). "We're looking forward to more feedback from the fleet in order to continue developing exciting capabilities for the aircraft."
"Boeing is honored to support the Navy and the service members operating and maintaining the new EA-18G Growler," said Kory Mathews, Boeing F/A-18 and EA-18 Programs vice president. "As we join the Navy in celebrating its first 100 years of aviation success, the service continues to achieve milestones that will stand out for decades to come."
The EA-18G is the only air combat platform that delivers full-spectrum airborne electronic attack (AEA) capability along with the targeting and self-defense capabilities derived from the Navy's frontline fighter, the F/A-18E/F Block II Super Hornet. A derivative of the two-seat F/A-18F Block II, the EA-18G's highly flexible design enables warfighters to operate either from the deck of an aircraft carrier or from land-based airfields. It is replacing the Navy's current AEA platform, the EA-6B Prowler, which has been in service since 1971. The EA-18G joined the Navy's aircraft fleet in 2008, when it was introduced to fleet training squadron VAQ-129.
Boeing, acting as the weapon system integrator and prime contractor, leads the EA-18G Growler industry team, which also includes Northrop Grumman, Raytheon and General Electric Aircraft Engines.
A unit of The Boeing Company, Boeing Defense, Space & Security is one of the world's largest defense, space and security businesses specializing in innovative and capabilities-driven customer solutions, and the world's largest and most versatile manufacturer of military aircraft. Headquartered in St. Louis, Boeing Defense, Space & Security is a $32 billion business with 65,000 employees worldwide. Follow us on Twitter: @BoeingDefense.