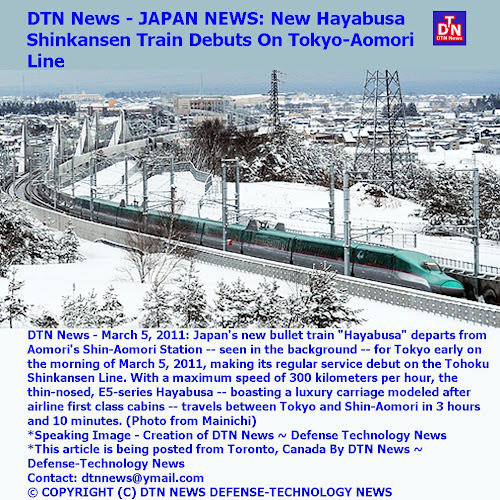 The train is the first new model deployed by the service's operator, East Japan Railway Co., since December 1997. It can travel at speeds of up to 300 kilometers per hour and it has the longest nose of any shinkansen at 15 meters.

It links Tokyo with Shin-Aomori Station in three hours and 10 minutes on its fastest run, taking 10 minutes less than the conventional Hayate train. JR East says it aims to raise the speed to up to 320 kph and shorten the time to three hours and five minutes in the spring of 2013.

The Hayabusa, whose seats are all reserved, has 18 "Gran Class" seats, a new class likened to first class in airplanes, costing 26,360 yen. Ordinary and premium Green Car seats are priced at 16,870 yen and 21,360 yen, respectively.

Tickets on the first train departing from Tokyo were sold out within about 40 seconds after being put up for advance sale on Feb. 5, with Gran Class seats selling out in about 10 seconds. It took 90 minutes for all the tickets for the first train from Shin-Aomori to be snapped up, according to JR East.

March 3. Today the first flight of the 2nd prototype of the fifth generation aviation complex (PAK FA) took place in Komsomolsk - on - Amur. The plane was piloted by distinguished test pilot of the Russian Federation Sergey Bogdan. The aircraft spent in the air 44 minutes and landed on the factory airfield runway. The flight was successful, in full accordance with the flight plan. Stability of the aircraft test was conducted during the flight as well as evaluation of the power plant systems’ performance. The aircraft proved itself well in all phases of the planned flight program. 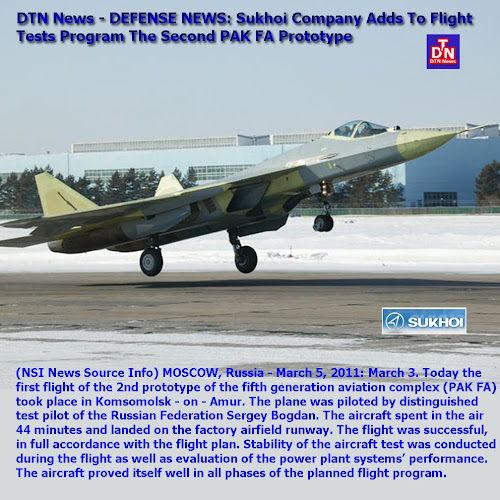 Tests on the PAK FA program are in accordance with the approved program. Currently, a set of preliminary ground and flight operations has been completed involving all three prototypes, which underwent bench strength tests, ground tests of fuel systems and other work.

The first flight of the PAK FA took place on January 29, 2010 in Komsomolsk-on-Amur. Acceptance tests of the prototype were completed at the end of March 2010. On April 8, 2010 the first flight model of the fighter jet and a comprehensive ground stand for working out the equipment and systems to provide flight test program, were delivered to the flying test center of the Sukhoi Design Bureau in Zhukovsky near Moscow. Upon completion of the required volume of preliminary tests on the stands of systems and components, including static strength tests of the static prototype, ground tests of the aircraft stand and the flight model, on April 29, 2010 the aircraft had started flight tests in accordance with the preliminary tests program. The first flight model made 36 sorties in accordance with the flight tests program.

Compared to the previous generation fighters, the PAK FA features a number of unique capabilities, including the functions of a strike aircraft and fighter. The 5th generation aircraft is fitted with essentially new avionics integrating the function of “an electronic pilot” and with an advanced phased antenna array radar. This considerably reduces the pilot fatigue, enabling him to concentrate on performance of a tactical mission. The new aircraft’s onboard equipment makes it possible to exchange information in the real time mode both with on-land control stations and with aviation group aircraft. The use of composite materials and innovative technologies, and the aerodynamic streamlining ensure unprecedented radar, optic and infrared stealthiness. This significantly enhances the operational capability against aerial and ground targets in all weathers, day and night.