Hamilton Sunstrand Corp., Windsor Locks, Conn., was awarded a firm-fixed-price contract with a maximum $37,704,099 for control indicators. There are no other locations of performance. Using service is Army. The date of performance completion is July 29, 2016. The Defense Logistics Agency, Redstone Arsenal, Ala., is the contracting activity (SPRRA1-11-D-0064). 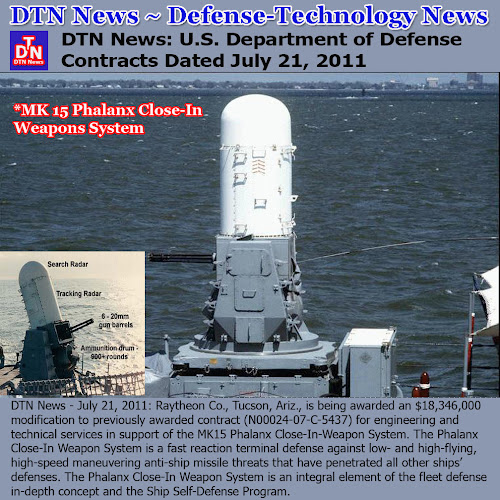 Raytheon Co., Tucson, Ariz., is being awarded an $18,346,000 modification to previously awarded contract (N00024-07-C-5437) for engineering and technical services in support of the MK15 Phalanx Close-In-Weapon System. The Phalanx Close-In Weapon System is a fast reaction terminal defense against low- and high-flying, high-speed maneuvering anti-ship missile threats that have penetrated all other ships’ defenses. The Phalanx Close-In Weapon System is an integral element of the fleet defense in-depth concept and the Ship Self-Defense Program. Operating either autonomously or integrated with a combat system, it is an automatic terminal defense weapon system designed to detect, track, engage, and destroy anti-ship missile threats penetrating other defense envelopes. The Phalanx Close-In Weapon Systems are installed on approximately 187 Navy ships and used by more than 20 foreign militaries. This modification will be incrementally funded in the amount of $11,625,546 at time of award. After award of this modification, the total estimated contract value will be $197,548,604. This contract combines purchases for the United States government (82 percent), and the governments of Japan, Australia, New Zealand, and Taiwan (18 percent combined) under the Foreign Military Sales Program. Work will be performed in Tucson, Ariz., and is expected to be completed by April 2012. Contract funds in the amount of $1,547,225 will expire at the end of the current fiscal year. The Naval Sea Systems Command, Washington, D.C., is the contracting activity.

Huntington Ingalls, Inc., Newport News, Va., is being awarded a $10,000,000 modification for planned supplemental work to previously awarded contract (N00024-09-C-2107) for the refueling complex overhaul of the USS Theodore Roosevelt (CVN 71). Work will be performed in Newport News, Va., and is expected to complete by February 2013. Contract funds will not expire at the end of the current fiscal year. The Naval Sea Systems Command, Washington, D.C., is the contracting activity.